The Dodgers bullpen has been a strength of the club this season, and one of the reasons the club holds a 4½-game lead in the National League West entering play on Monday. But last week was a rough patch for Dodgers relievers.

The previously untouchable Yimi Garcia allowed two of the four home runs, blowing saves on Monday and Friday. The club was bailed out Monday thanks to a three-run, walk-off home run by Scott Van Slyke, but the bullpen carnage continued.

Adam Liberatore and Chris Hatcher presided over a three-run seventh inning after Thursday's 85-minute rain delay that turned a 4-2 lead into a 5-4 Dodgers loss to Miami. The same scores happened the next night when Carlos Gonzalez hit a three-run home run for Colorado off Garcia in the ninth.

Sergio Santos allowed two home runs and five runs on Saturday in an odd outing that also saw him strikeout four in one inning. To top things off, the red-hot Pedro Baez suffered a right pectoral strain and was placed on the disabled list after 12 strikeouts and just one walk in seven scoreless innings in May.

But despite the bullpen having a bad week, the Dodgers managed a winning week and did get Kenley Jansen back, which might be a large enough rug to cover up all of the bullpen problems, and that's the greatest relief of all.

Dodger Batter of the Week: Andre Ethier continued his resurgent season, hitting .409 (9-for-22) with a .480 on-base percentage during the week, including tying a career high with five hits on Tuesday night.

Honorable mention goes to Howie Kendrick, who had an under the radar .379/.419/.552 week. Kendrick had four hits on the night Ethier had five, then had a three-hit night on Friday, when Jimmy Rollins had four hits.

Dodger Pitcher of the Week: Mike Bolsinger has taken his opportunity and made the most of it so far, allowing just one run in two starts, both wins, last week.

Honorable mention goes to Zack Greinke, who pitched well in two starts but had no wins to show for it; and to Kenley Jansen, who made his return and retired all seven batters he faced with five strikeouts, including four in one inning on Friday. 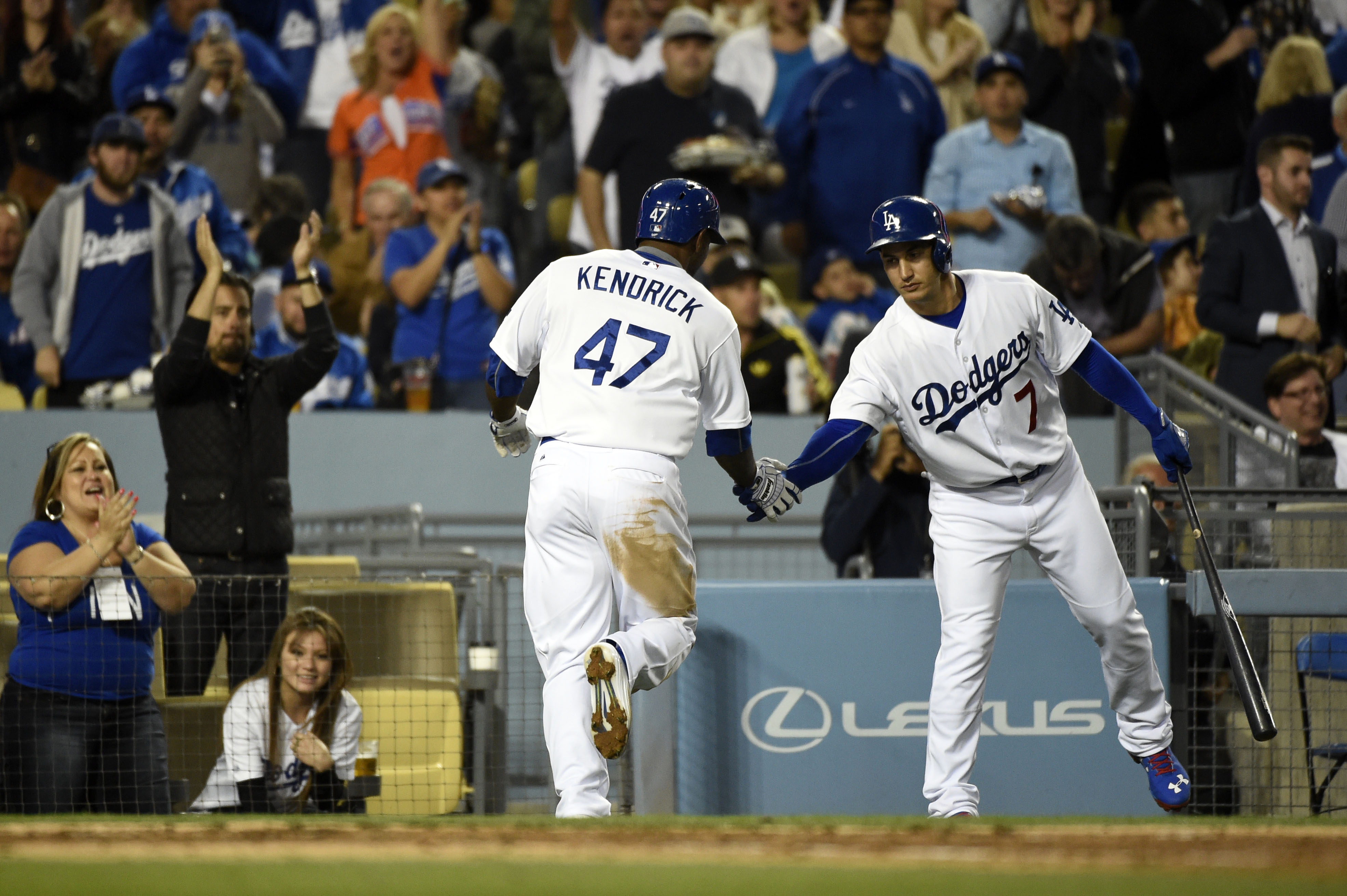 Best of both worlds on Tuesday, getting to see Giancarlo Stanton hit a ball four miles, over the left pavilion, and the Dodgers offense racked up a season-high 21 hits in an easy win. (Photo: Richard Mackson | USA Today Sports).

Delayed: The Dodgers were delayed by rain on Thursday, the second time this season that has happened at home, a rarity for a club that hasn't had a home rain out at Dodger Stadium since April 17, 2000. The 30-minute rain delay on April 7 was before the game; Thursday's 85-minute delay in the sixth inning is believed to be the first in-game rain delay at home for the Dodgers since May 23, 2008, a 65-minute ninth-inning delay against the Cardinals.

4-K club: Before last week the Dodgers had five pitchers strikeout four batters in one inning. But in the span of two days, a pair of Dodgers relievers tied the major league record, with Jansen striking out four on Friday in his season debut, then Santos doing the same one night later, albeit in an inning that also saw Santos allow three runs.

Friday: Activated Jansen from the DL; optioned Coulombe to Triple-A.

The Dodgers run the Chris Jones gauntlet, taking Monday off then heading to San Francisco for three followed by a series back home against San Diego.