Share All sharing options for: 2015 MLB Draft: The top 200 prospects

The 2015 MLB draft is less than two weeks away in what has been one of the more volatile years for player rankings and mock drafts. Rather than simply complain about why I feel a player is too high or too low, I set out this year to rank as many players as possible, ultimately stopping at the nice round number of 200. One thing I wanted to do different from other rankings was to tier the player grades to reflect the various ranges of decision making that can go into selecting a player. Before explaining this in more detail, here’s the general guidelines for reading this list:

I came to the rankings based on my personal evaluations of players’ film, athletic testing scores (for High Schools that attended Perfect Game events primarily), production (for college players, but also high schoolers on the summer circuit), and filled in gaps with whatever scouting reports I could find. I did not rank any players I could not find film on or did not see in person when no video was present. I wasn’t able to see as many guys on this list thanks to a down year for players that play around my area.

To determine what players to examine for this list, I looked at draft lists from Baseball America, Perfect Game, and FanGraphs to give me a "follow" guide for players. The problem that comes from this is that I may miss a player outside of their reach that I may have otherwise deemed worthy of being ranked in my top 200. Regardless, I do feel comfortable with the amount of players I was able to look at using the above tools to give a list of 200 names, though I do feel 200 is going to always be the high water mark.

For each player ranked, I’ve linked to a video for you to also view the player and make your own opinion. Some videos do not necessarily reflect the primary tool I used to grade the player. either that video could not be linked or I personally observed the player and do not have the film from that.

Player grades, risk, and ceiling are all graded using the standard 20-80 scale, with 45 being average and 40 being fringe average. Each increment of 5 represents a pseudo-scientific increase of one standard deviation above or below average. So a 60 graded player is three deviations from the mean.

The overall score is simply a tier grade, and doesn’t necessarily suggest where I see the player right now. Obviously, I don’t think Dansby Swanson is a 70-grade player right now, but a 70-grade prospect. Essentially, the 70 grade guys can walk into most systems and be their first or second best prospect.

The risk score is my opinion of the player’s likelihood of reaching the major leagues. A high score represents a higher likelihood of becoming a big leaguer. Swanson and Alex Bregman are my two closest sure-fire big leaguers I ranked this year, because of positional scarcity, present tools, injury history, and future profile. If a player has a low score, it could be because of a current or past injury, a history of injury, a poor track record of performance, the rawness of the player’s skills, distance from the majors, or the demands of the position the player most likely will play in the pros. Injury risk is what is holding back Brady Aiken and Mike Matuella from reaching a full player grade higher.

The ceiling score is the best case scenario for a player if everything breaks right. This is the score you see when you close your eyes and imagine what the player could eventually do in a big league uniform. For uniformity sake, I tried to score ceiling on what I might imagine their WAR outlay to be, rather than a straight positional comparison. That way, relief prospects don’t score out with high ceilings despite only contributing 1-2 WAR in good seasons. So position does matter in ceiling scores. Please note, this does not necessarily represent what I see the player likely becoming, just what he could become in a perfect world. As you’ll note, several guys with low risk scores will have high ceiling scores, these are your boom or bust gambles. 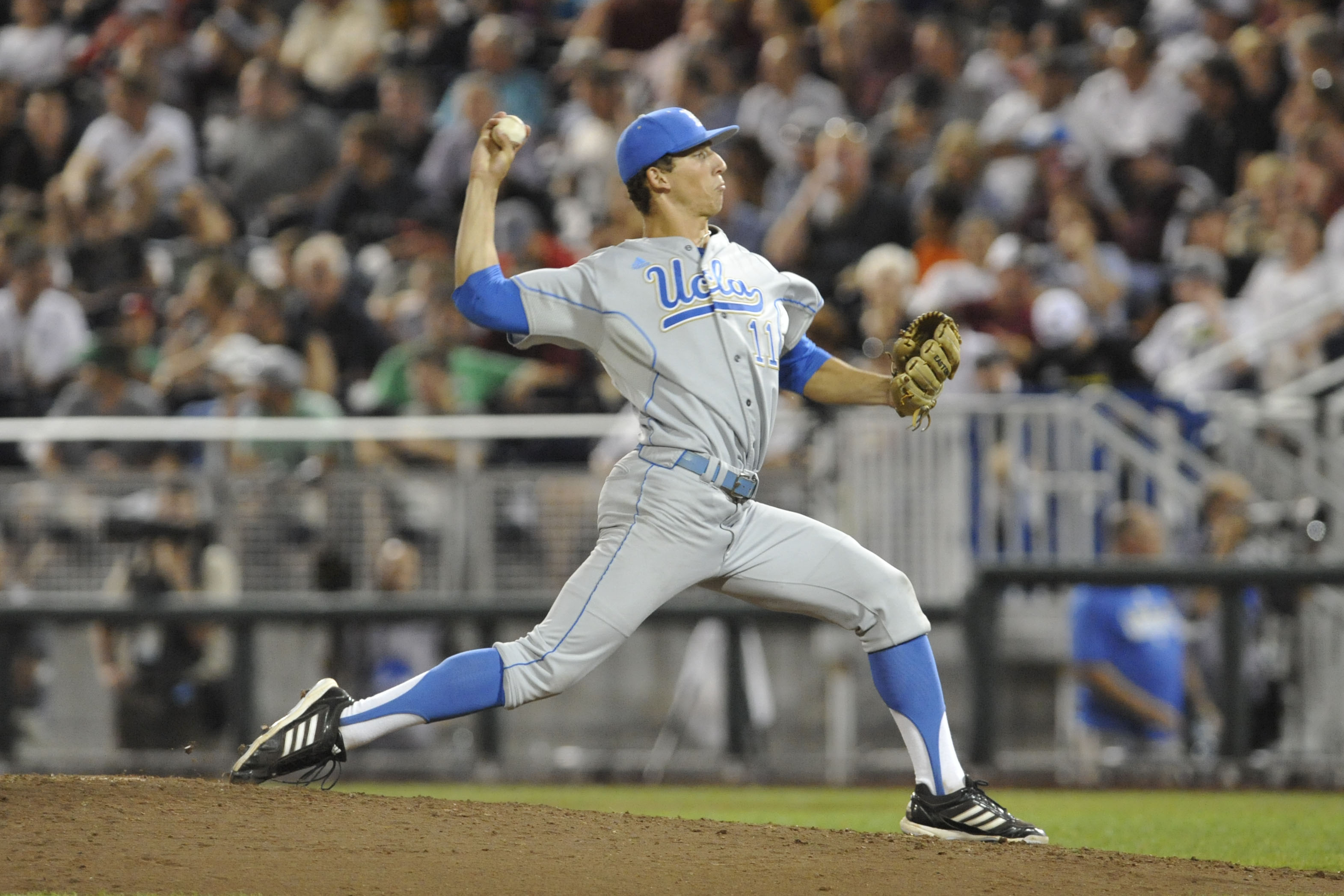 While players are individually ranked, I want the majority of your focus placed on the tiers of the prospects. It’s a little ridiculous to rank individuals by value when they have yet to be managed by a professional coaching staff and could be three years away from reaching the major leagues. The tier represents the quality of the "mold of clay" in the player, with the higher tier representing better talents to transform into major leaguers, either they have the highest ceilings, or the highest likelihood of becoming major league ball players, or in most cases, the best mix of risk and ceiling.

I want tiers to represent how teams might see players on the big board. If a team takes #37 Cole Sands while #30 Dakota Chalmers is still on the board, I don’t want it to look like an overdraft, but instead the team felt they had the best development staff to get the most out of Cole Sands tools compared to Dakota Chalmers. Or, the team might have felt the dollar amount Sands gave them compared to Chalmers was more reasonable given the risk involved.

Alternatively, the tiers can be used to compare team philosophies between risk and ceiling, or college and high school. A team look for a safe collegian that takes #33 Alex Young while bypassing #28 Justin Hooper may be doing so because they value safety with their first pick or want a player that could move quickly, rather than risk the potential reward found in Hooper’s upside. The tiers suggest that such decisions aren’t wrong, just a difference in preference.

Now, you probably notice the tiers grow as you go further down the list. The "40" tier could have gone another 50-100 names. These tiers are like a bell curve and eventually give way to team preference. Players in the 100’s often have enough warts that it boils down to team preference or the nature to which a team’s board is shaking out. You can have too many shortstops, especially if you have drafted a collegian in round one and in round three your top ranked guy is a college shortstop. They are going to be developed on too similar of paths that one is inevitably going to be stunted by another. so tiers can help shake out which players might still be comparable talents when you can’t just take the top name on your list.

The last two sections on the list are my shorthand notes to help paint a picture of the player’s profile. Some may read redundant, but these are broad strokes, and I will give more detailed analysis on players the Dodgers do eventually draft. I won’t try to explain every shorthand note, but keep in mind when I say things like "not as projectable" I’m comparing the player to his peers in his tier. I may say Andrew Benintendi is not as projectable compared to other "55" tiered players, but he’s obviously more projectable than a college outfielder in the "40" grade tier. If you have any questions about the comments in the pros and cons, please leave them in the comments or you can ask me at @davidchood on twitter.

You might see several names pop up on other top 100 lists that you may not see here, and that’s because I could not find enough information to give my person judgment. Rather than holding out to the beginning of the draft when some video may inevitably show up, I decided to get the list published now and will instead list the names of players I could not consider due to a lack of information: Kolton Kendrick (Oak Forest HS), Tanner Rainey (West Alabama), Brandon Koch (Dallas Baptist), Jacob Taylor (Pearl River CC), Bryan Hudson (Alton HS), Casey Hughston (Alabama), Jack Wynkoop (South Carolina), Jared Padgett (Graceville HS), Brendon Little (Conestoga HS), Ryan Karstetter (Pendleton HS), Trey Cabbage (Grainger HS).

UPDATE 6/6/15: I was able to add eight new names to the list, including Cabbage, Koch, Hudson, Padgett, and Little from the list above.