The Dodgers continued their red hot home start, winning five of six against the Giants and Diamondbacks. The team is 13-2 at home this year and at 16-8 the club has a three-game lead in the National League West.

Dodger Batter of the Week: Dodgers center fielder Joc Pederson continued his fine rookie season. He didn't hit a single last week, but did hit four home runs and a double while driving in eight runs. He snapped the Dodgers' 286-game streak without a grand slam, and was the first Dodgers rookie in 46 years to hit a home run in four straight games (with an at-bat). Pederson this season ranks ninth in the majors in OPS (1.022) and OPS+ (186).

Honorable mention goes to Justin Turner, who hit three home runs of his own and drove in five runs. He owns a .610 slugging percentage this season. Andre Ethier also continued his renaissance with two more homers.

Dodger Pitcher of the Week: The Dodgers allowed 12 runs all week, none at all by the bullpen in 25 innings. Carlos Frias gets this award with his two scoreless appearances, one start and one in relief, with two wins.

The only loss of the week was hung on Clayton Kershaw, who struck out eight and walked none in seven strong innings in his best start of the season to date. 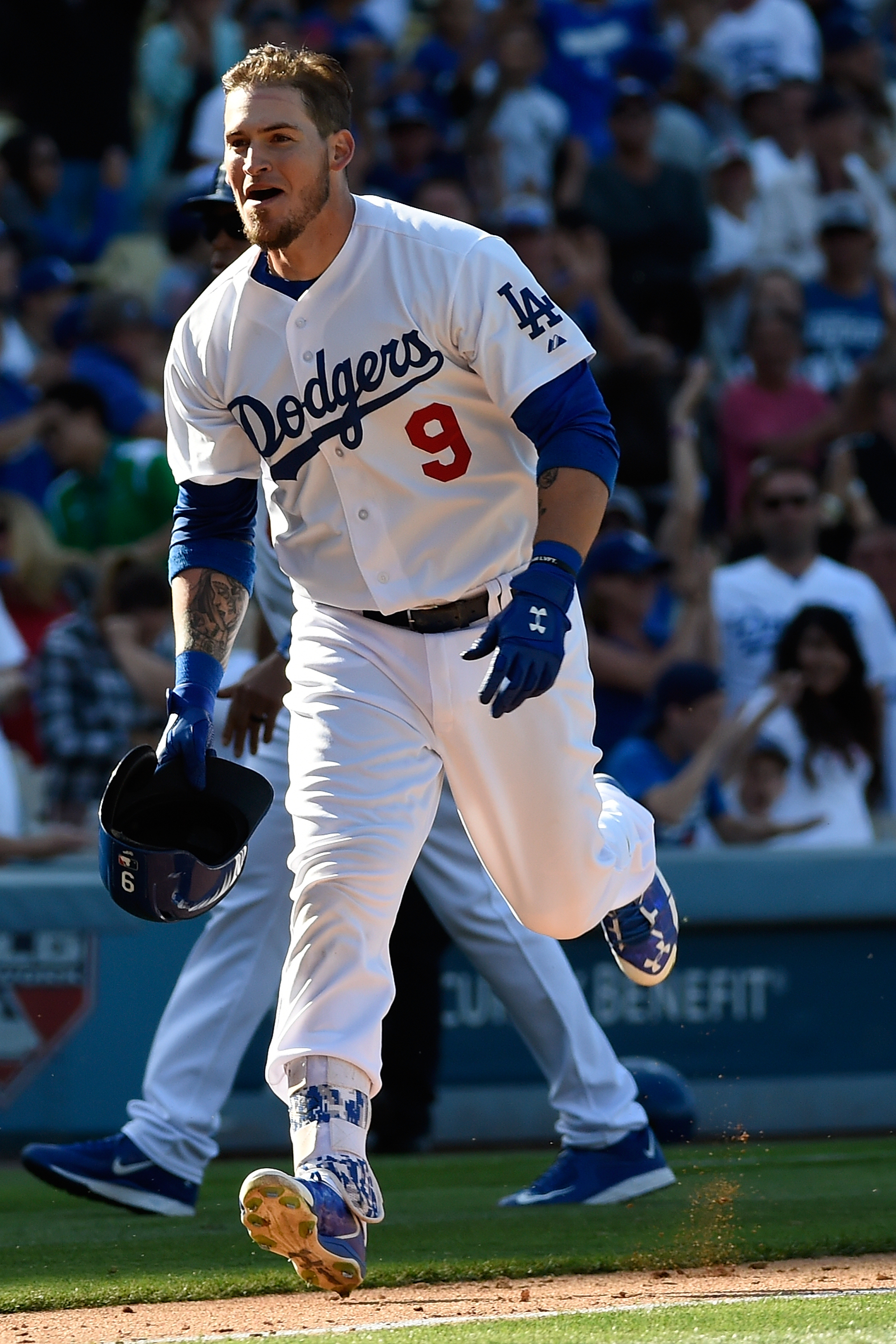 Dodgers pitchers threw up 13 innings of zeroes, we had the dramatic no-look tag at the plate, culminating in a walk-off home run by Yasmani Grandal. (Photo: Lisa Blumenfeld | Getty Images).

Monday: Newly acquired left-handed pitcher Xavier Cedeno was traded to the Rays for cash considerations, three days after he was designated for assignment.

Monday: Brandon McCarthy got the bad news that he tore his UCL, and was placed on the 15-day disabled list; Adam Liberatore was recalled from Triple-A Oklahoma City. McCarthy had Tommy John surgery on Thursday in Los Angeles, with an estimated recovery time of 14-18 months.

Tuesday: Carl Crawford was placed on the 15-day disabled list with a right oblique strain, and utility man Enrique Hernandez was recalled from Triple-A Oklahoma City.

Thursday: Left-handed pitcher Eury De La Rosa was claimed off waivers from Oakland, and optioned to Triple-A Oklahoma City; to make room on the 40-man roster, McCarthy was transferred to the 60-day DL.

Sunday: First baseman Andy Wilkins was acquired from Toronto for cash considerations, and Scott Baker was designated for assignment, suffering the "allow a run to the D-backs, get cut" fate.

The Dodgers run the Jeff Cirillo gauntlet, hitting the road to play four games against the Brewers in Milwaukee followed by three games against the Rockies in Denver. Mike Bolsinger is my guess for Thursday. Nothing has been announced yet.