A review of the new food offerings at Dodger Stadium

The Los Angeles Dodgers hosted bloggers both Monday and Wednesday at Dodger Stadium. While a few topics were addressed, the most fun was definitely the food tasting.

Share All sharing options for: A review of the new food offerings at Dodger Stadium

LOS ANGELES -- On Monday night, the Los Angeles Dodgers hosted a bevy of bloggers at Dodger Stadium in the "Hall of Fame" conference room. (The Dodgers held a similar event on Wednesday.)

*Full disclosure: Each participant received a ticket to the game on the Club level, a wristband for free non-alcoholic concessions at the stand on that level and a copy of the June 2015 issue of "Dodger Insider" magazine. Our representatives were writer Craig Minami, community members Bobby Bruin and Catherine the Blue, and this author.

On Monday Tingley provided us samples of "Honey Bourbon Smoked Wings", which are currently featured at Think Blue BBQ, located just beyond the left field pavilion. Bobby rated them "very good", Catherine described them as "flavorful and not overly sweet" but stated that they were "a bit messy for the ballpark, I would love a boneless option", while I found them tasty and pleasing without being cloying. Normally served on a bed of potato salad and with a square of cornbread. 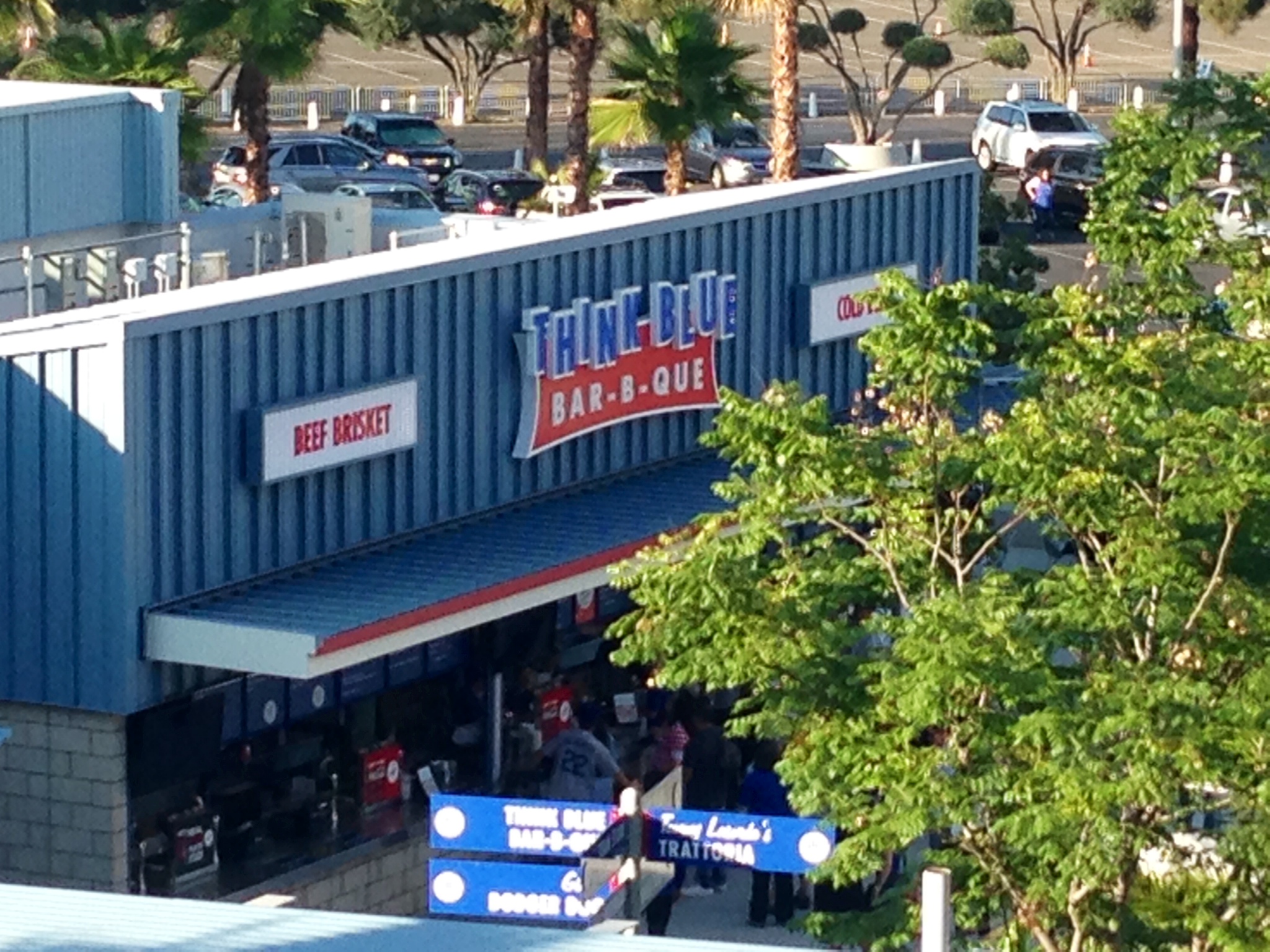 One of Smith's improvements to the stadium are the outfield plazas, and on the left-field side is my favorite food addition, the Think Blue BBQ.

Think Blue BBQ also features delicious "Louisiana Hot Sausages" which I have enjoyed on multiple occasions with my guests at the stadium. The sausages themselves have nice snap to them, with a strong but not overly aggressive heat level. The "blue cheese coleslaw" makes for a soothing accent to help temper the fiery heat of the link, and is carefully constructed to not saturate the bun in liquid. (And I don't even like coleslaw!)

A highlight dish is the pulled pork sandwich, clearly slow-cooked patiently and neither overly pulled nor overly-sauced, with some nice charring on the ends. The tangy and sweet blend accents the pork nicely. When Catherine the Blue tasted this, she remarked that, "this is some of the best pulled pork I've had in LA, and I'm a barbecue snob from Alabama!" A scant amount of red onion garnishes this sandwich along with few sliced dill pickles for a balanced flavor blend.

I have not tried the brisket this season; last year's version was good, but not the standout that the sausage and pork were. (I did have brisket pieces that were atop a "St. Louis Extreme Dog" at the last homestand, and the tasty shreds meshed well with the hot dog.)

As Catherine put it, Levy, Tingley and the Dodgers are "doing good work" at Think Blue BBQ and I hope this trend in food continues as long as I'm going to Dodger Stadium. 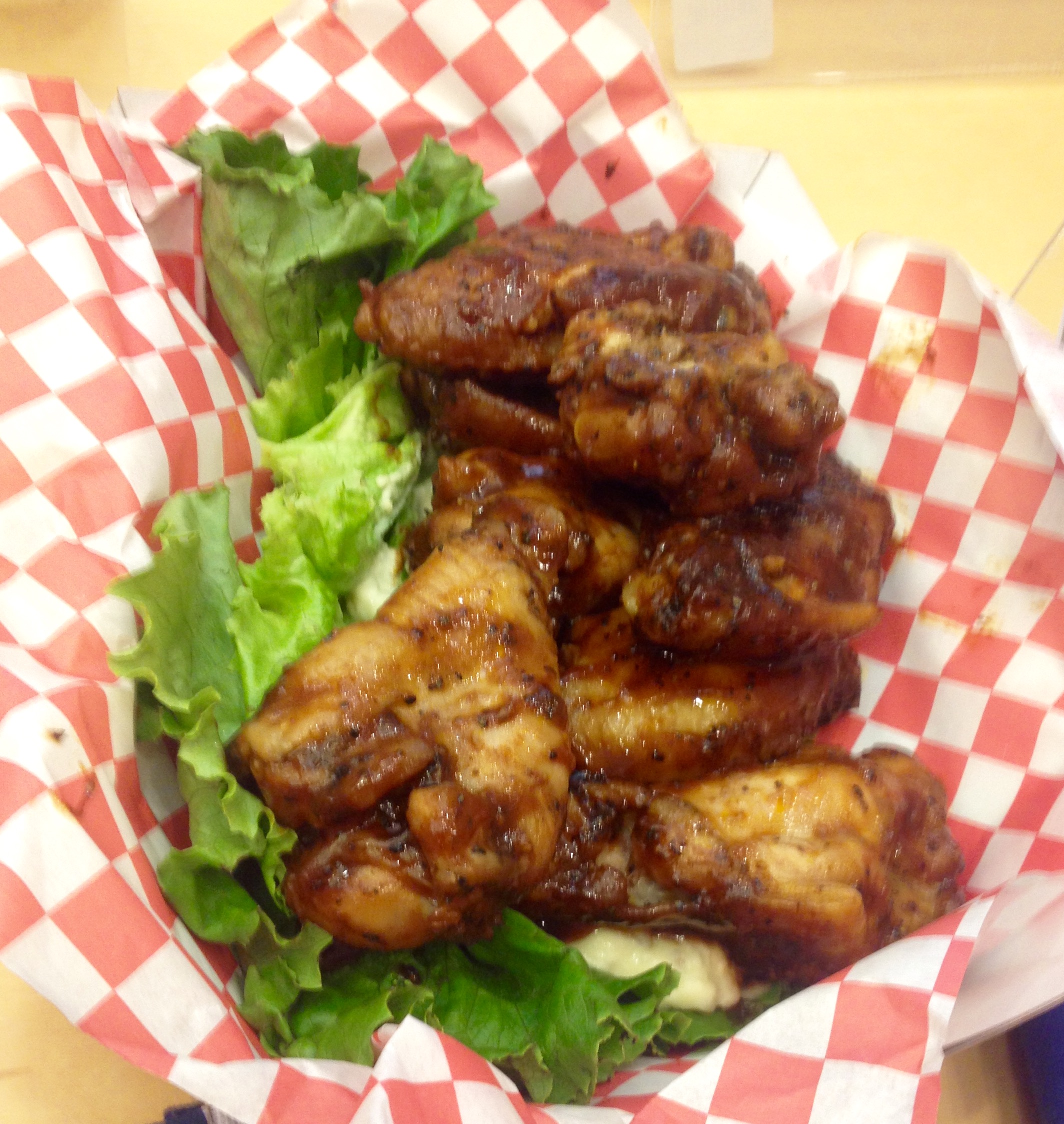 Honey Bourbon Smoked Wings, delicious! (Not pictured is the piece of cornbread that it is served with.)

Siegel wanted to make sure that we were all aware of the large number of promotions and promotional items that the Dodgers feature at games (see this Fanshot for a peek at the Juan Uribe and Yasiel Puig bobbleheads coming in July), and Smith reiterated all the new features that were added during the renovations over the past couple years at Dodger Stadium, emphasizing the desire to have a "permeable" stadium for fans to experience.

Monday was also the first day of the MLB Amateur Draft, a busy time for the baseball people, but the President and CEO of the LA Dodgers, Stan Kasten, did stop in for a brief appearance between the Dodgers first two picks to ask for questions and inform us that Walker Buehler, their first pick (24th overall), was actually ranked ninth on their "board".

But the highlight of the evening (outside of the game itself) was listening to the "energetic and enthusiastic" (per Catherine) Tingley, as Bobby put it, "wax poetic about the quality of the beef the Dodgers use" and the "ongoing process of creating a bread recipe that would taste good and not lose its texture under a heating lamp". Well, and tasting the food samples* they brought us!

*Drink samples too, but no one in our group particularly cares for micheladas apparently. Needed a tomato juice aficionado among us, I guess.

A new idea that Chef Tingley has in the works is a Tommy Lasorda's Trattoria pizza with a Dodger Dog baked into the crust! The Chef's concept for the dish is for fans to enjoy the slice as they would a normal pizza, then bring the Dodger Dog-filled crust to a nearby condiment stand to adorn as desired. He noted that a Dodger Dog would fit perfectly into the crust of one-quarter of the 16-inch pie and stated that this was a work in progress, pending various necessary approvals. 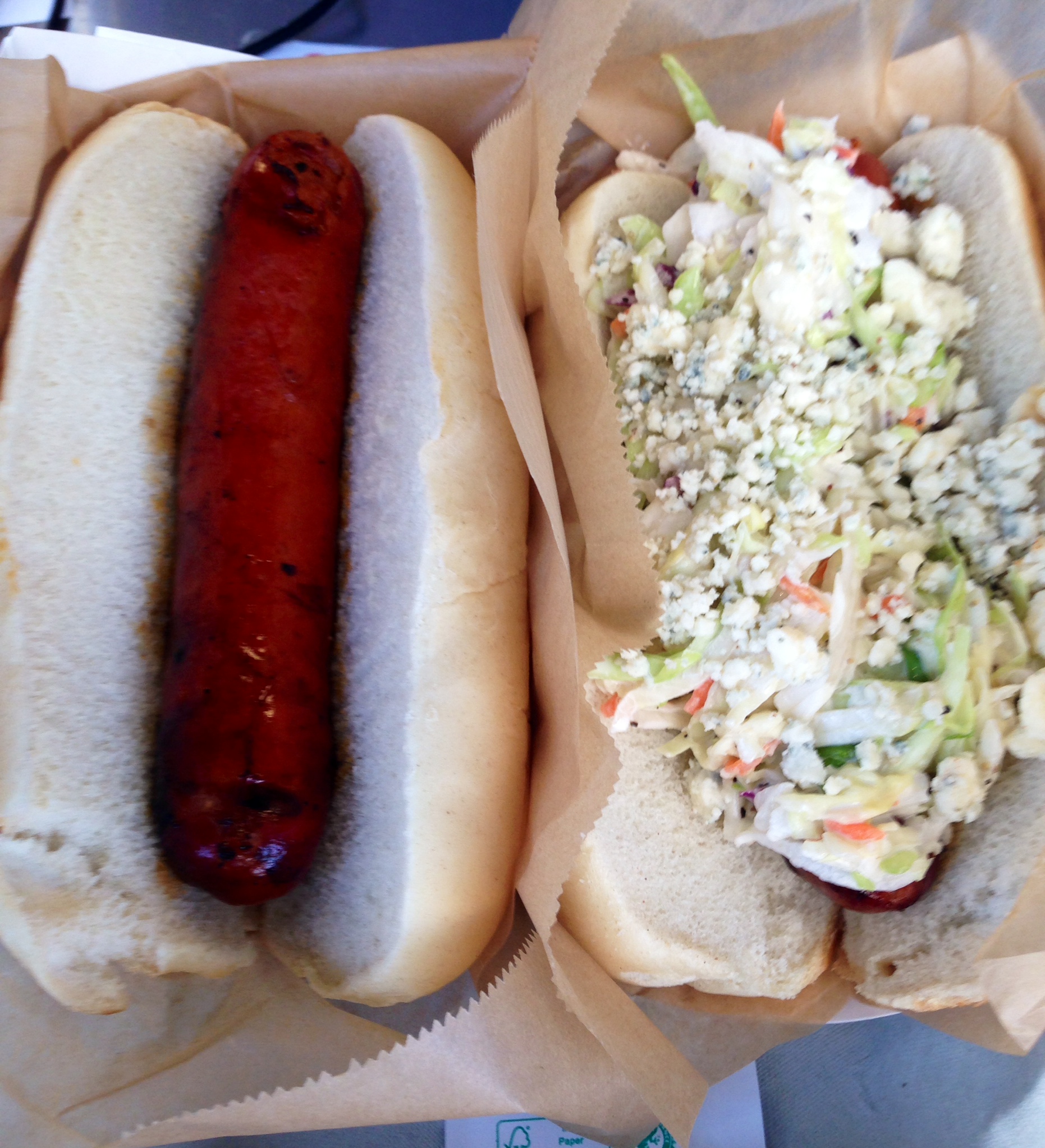 Chef Tingley comes across as excited about his work and as always looking to improve the fan food experience while fully understanding, as Bobby put it to me, "the challenges of creating a menu for 50,000 people: the food options must have a wide appeal, taste good, and must remain profitable without sacrificing the quality of the ingredients."

I found the quality of the promotional items on display Monday, as well as the ones I've already received this season quite good, and deserving of the praise Siegel was heaping upon them. Bobby was "particularly impressed with the childrens' items" and had his "eye on the kids' hamper*" that will be given out on July 12, although I'm not sure where he will be renting a child 14 years or under to receive it for him.

*When this hamper was pointed out by Siegel, Catherine immediately declared "I want that!"

The recent unfortunate event in Boston where a fan was seriously injured by a splinted portion of bat that flew into the stands prompted Craig to ask Smith if that incident has caused the Dodgers to reconsider the position of protective screens in Dodger Stadium. She stated that fan safety is always a primary priority and an ongoing topic of discussion in their offices and that they will continue to evaluate the situation.

Thanks to the Dodgers for the enjoyable event and to Craig, Bobby and Catherine for attending.