LOS ANGELES -- The offense was the story in Sunday's Dodgers rout of the Giants, but Brett Anderson quietly continued his quietly solid season in the win.

The oft-injured left-hander, who averaged just 52 innings over the previous four seasons, has been a picture of health in 2015 for the Dodgers, and quite reliable in the rotation.

Anderson made his 14th start of the season on Sunday, and he's up to 82 innings on the season, his most since 2010 and 2011, respectively. But the left-hander's focus hasn't been on surpassing personal benchmarks, but rather focusing on 2015, which has led to a successful campaign.

"I just take it one start at a time, as cliche as it might sound," Anderson said. "I get myself ready and do the best I can to go out there every five or six days to give us a chance to win. For the most part, I've done that.

"At the end of the season I can look back and say I made X amount of starts and pitched X amount of innings compared to what i've done in the past, but at this point I'm in that mode to go out there and give us a chance to win."

On the season, Anderson's ground ball rate of 67.3 percent, tops in the majors. On Sunday he induced 11 ground ball outs, none bigger than by Matt Duffy, who in a 5-1 game with the bases loaded in the third inning and Buster Posey on deck, hit a first-pitch ground ball to Jimmy Rollins at shortstop for an inning-ending double play.

"We knew he was going to be aggressive, and we weren't going to give him anything to hit. We were going to stay soft on him. Basically their whole team with runners in scoring position is aggressive. Brett has been getting a lot of outs on changeups, so why not? His changeup kind of looks like his fastball," catcher Yasmani Grandal explained. "My thought process was to show him something that looks like the fastball and get him to roll over." 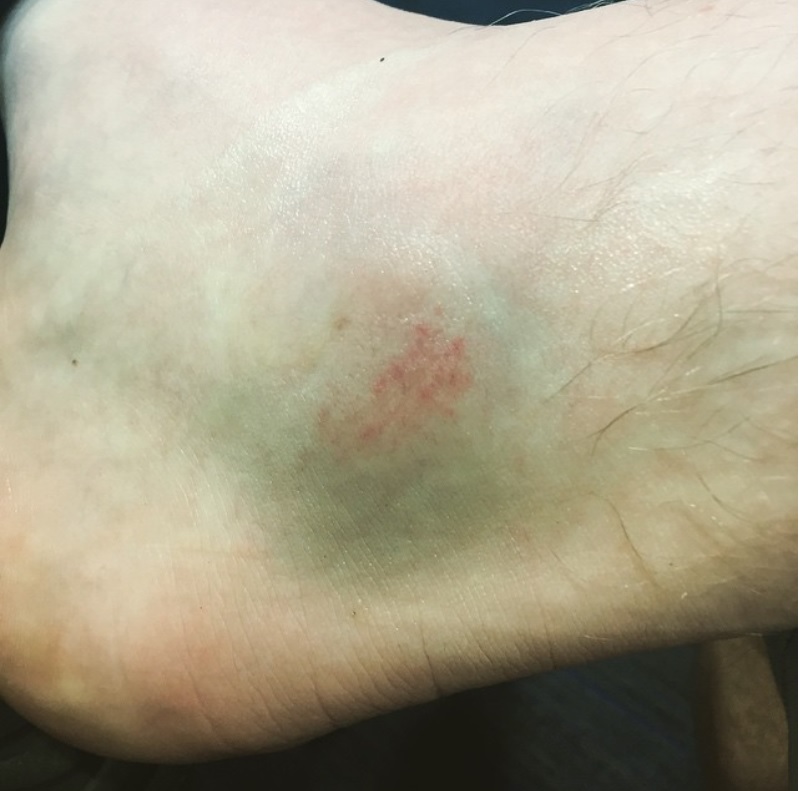 Anderson also tweeted a picture of the bruise, and also posted it on Instagram:

Anderson allowed one run in six innings for his third win of the season. He needed only 85 pitches and likely could have pitched longer, but the big lead and Duffy's first-inning ground ball off Anderson's ankle - a single that turned into a 1-5-4 putout when Duffy tried to take an extra base after the ball ricocheted into foul territory near third base - made the decision to remove Anderson that much easier.

"He was fine. It was just a matter of trying to save him some bullets. He has been going deeper in games for us and he said he could have kept going," manager Don Mattingly said. "We didn't want to get that [ankle] to get extended too far, where he might get sore and change anything."

Anderson after the game said his ankle was fine.

"It didn't really swell up too much. I got an ace wrap to try to prevent swelling with the plane ride," Anderson said, then joked, "There's a bruise, but I've already got cankles so it doesn't make it look too much worse."

The Dodgers move on to Chicago, beginning a four-game series at Wrigley Field on Monday night. Clayton Kershaw starts the series opener, with the Cubs sending fellow southpaw Tsuyoshi Wada to the mound.

Mattingly said Rollins will get a planned day off on Monday, despite five hits in the shortstop's last two games. We already know Andre Ethier will get the day off against the lefty, and It's a safe bet that A.J. Ellis will again catch Kershaw, especially after Grandal started the last four games behind the plate.

Whether we see Justin Turner in the lineup remains to be seen. Turner has a home run in three straight games, but has also never started four straight days all season. The general plan has been for Turner to start three days, get one day off, then start another two to three days, then get another day off.

"I still have to be careful with him. That's why I tried to buy him a couple innings tonight," Mattingly said. "He's swinging the bat good."

He did exit Sunday night with a big lead, getting the final two innings off. So maybe Turner could return to the lineup on Monday in Chicago.