Share All sharing options for: Hector Olivera reaches base 3 times in pro debut for Double-A Tulsa

Dodgers infielder Hector Olivera made his professional debut on Thursday night for Double-A Tulsa, going 1-for-4 with a two walks against the Midland RockHounds (Athletics).

Olivera started at third base and batted fifth in his first game for the Drillers.

He popped out to first base in the first inning, a three-pitch at-bat.

Hector Oliver's looked a little overeager in his first at bat. Held up from chasing two pitches before popping up to first. Great build.

In the third inning he singled on a chopper to second base on a 1-0 pitch for his first professional hit.

Olivera walked in the sixth inning on six pitches.

In the eighth inning, Olivera walked again, this time on 10 pitches, a battle that included five straight foul balls.

In the 10th inning he popped out to shortstop on the first pitch.

With two runners on in the 12th inning in a 3-3 game, Olivera struck out looking on five pitches to end the inning.

On the night he saw 27 pitches in his six plate appearances. 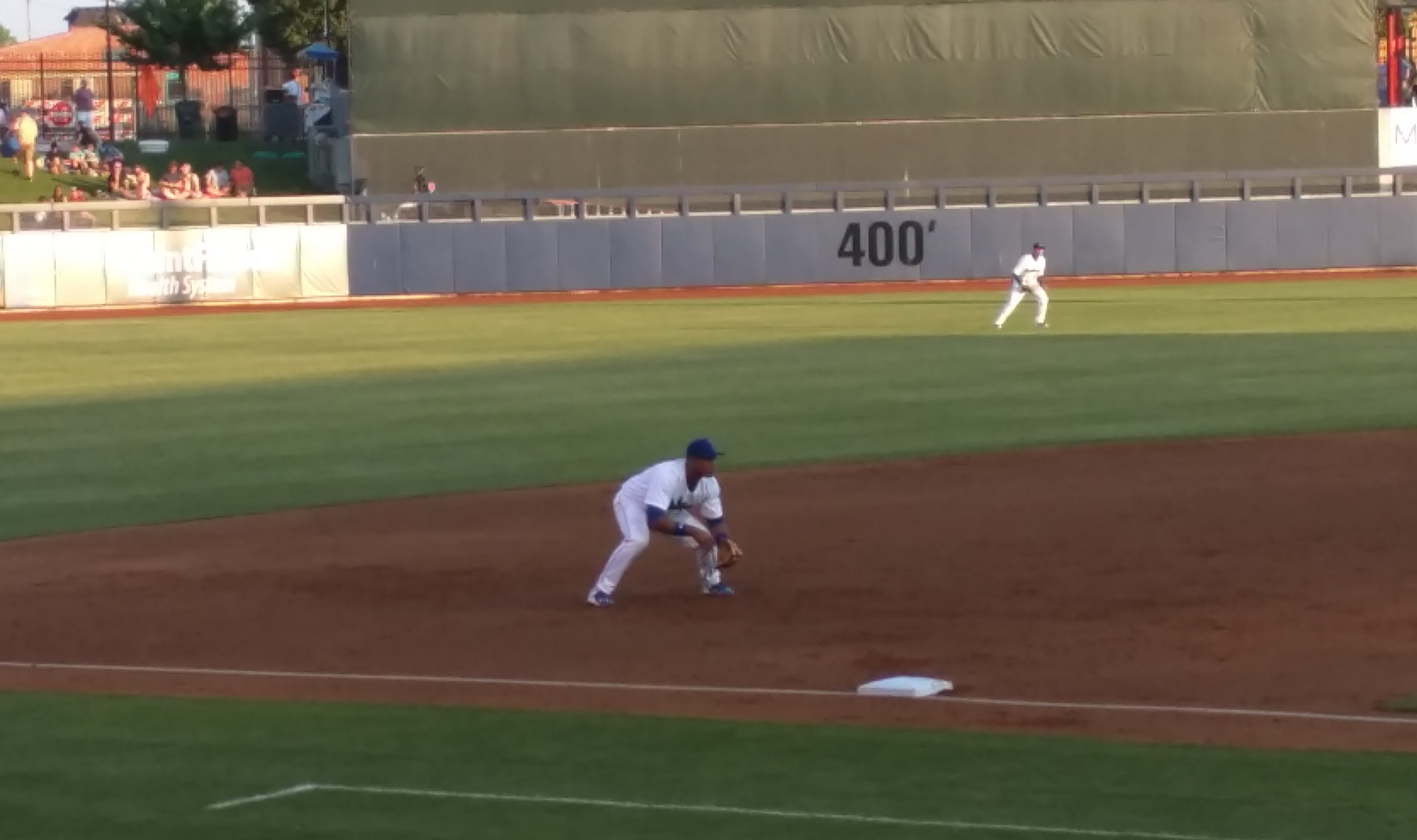 Olivera gets in defensive position at third base on Thursday (Photo: David Hood).

He saw two plays in 12 innings at third base, catching a line drive in the first inning, and a ground out in the seventh, both hit by RockHounds right fielder Josh Whitaker. But that wasn't the only ball hit his way.

First ball to challenge Olivera at third goes by his left side uncontested. It was a hard hit ball, but he didn't show great reaction.

David Hood was at the game, and added his thoughts:

Physically, it's quite apparent Olivera is a man playing with boys at the Double A level. He's broad shouldered and muscular, with a narrowing waist and legs. he looks every part a third baseman or even a corner outfielder. I didn't get the chance to see his athleticism or defensive skills on display, but his hands and defensive actions looked polished between innings.

On the one play he did attempt to make, Olivera was slow to react on a hard hit ball to his left, where he took a step and then fell-dove for the ball. It was only one look, but Olivera looks far too large to capably handle second beyond a spot start or two.

Offensively, Olivera looked a little overeager, despite his two walks. He hits from a low crouch and his weight shift is exaggerated. He showed decent barrel control in attacking a high fastball for a base hit. Given the movement in his swing, I'm interested to see how he'll manage good off speed pitches going forward, since his approach requires better pitch recognition.