LOS ANGELES -- It is Friday evening, less than 100 hours before the 2015 MLB All-Star Game, and Dodgers pitcher Clayton Kershaw still is on the outside looking in for a trip to Cincinnati. The latest blow to Kershaw's All-Star candidacy came Friday, coming in third place in the National League Final Vote.

Cardinals starter Carlos Martinez won the Final Vote with 14.1 million votes, and is the 34th player in the NL roster. Johnny Cueto of the Reds was second place, with Kershaw third, Troy Tulowitzki fourth and Jeurys Familia fifth.

"You always want to go to All-Star Game so, there's a little disappointment there, sure," Kershaw said, though he also said he was happy for all the support he received.

Ending Twitter hibernation to thank everyone who voted for me! Very cool to see the turn out regardless of the results!

MLB provided an interactive map which showed the voting breakdown by county. Kershaw received 90.7 percent of the vote in Los Angeles County, for instance.

One particular county in South Carolina did not live up to its name: 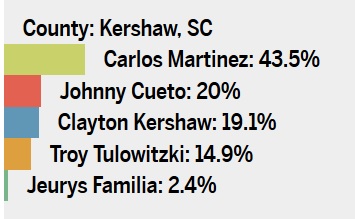 Kershaw could still end up on the NL All-Star team, if any pitchers back out. Any starting pitchers who pitch on Sunday can't pitch in the All-Star Game, so that might be an avenue by which Kershaw gets added.

"I don't really care how I get to go. I have no pride in that," Kershaw said on Wednesday. "If I get to go, great. If not, enjoy the time off."