LOS ANGELES -- The 2015 MLB Futures Game is Sunday afternoon at Great American Ballpark in Cincinnati (noon PT, ESPN), and the Dodgers will have a pair of representatives in catcher Kyle Farmer on the U.S. Team and pitcher Juan Gonzalez on the World Team.

Farmer has made a name for himself both at the plate and behind it.

The Dodgers drafted Farmer in the eighth round in 2013 out of the University of Georgia, where he was a shortstop for four years. But the Dodgers wanted the athletic Farmer - he played quarterback for four years in high school in addition to baseball - at catcher.

"The coaching staff that's with the Dodgers is kind of unbelievable," Farmer said. "They put you in good situations and they have patience with you, and that's gotten me to where I am."

It has helped that three of his minor league managers — Damon Berryhill at rookie-level Ogden in 2013, Bill Haselman at Class-A Great Lakes in 2014 and advanced Class-A Rancho Cucamonga in 2015, and Razor Shines at Double-A Tulsa in 2015 — were catchers for at least part of their playing careers.

"It's his leadership and his ability to connect with pitchers that has shined. He's been an exemplary teammate," said Gabe Kapler, the Dodgers director of player development. "It's been a pleasure to watch him rise and a true feather in the cap of our catching specialist, Travis Barbary."

Barbary was in Tulsa when the news came that Farmer would represent the Dodgers in the Futures Game, the annual midsummer showcase of many of the top prospects in baseball. Farmer was about to warm up a pitcher before a game when Barbary called him into the clubhouse and told him the good news.

"I was very shocked and surprised, but it's an honor and I'm really looking forward to doing it," Farmer said.

Farmer was a California League All-Star with Class-A Rancho Cucamonga but didn't get to play in the game because he was promoted to Double-A Tulsa in June. Farmer has started 14 of the last 25 games behind the plate. 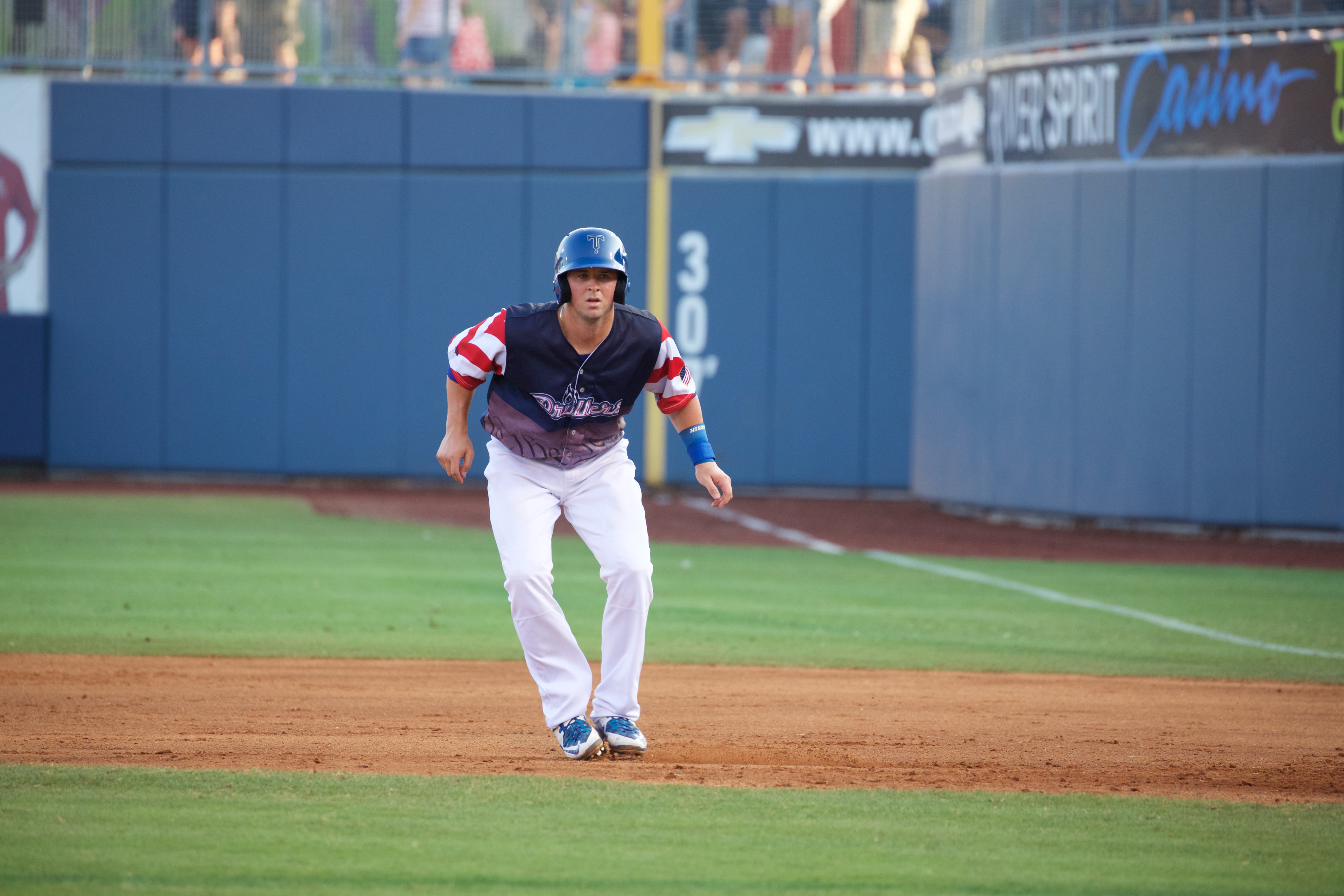 Kyle Farmer was not only a California League All-Star; he was a patriot, as these Tulsa uniforms suggest. (Photo: Rich Crimi | Tulsa Drillers)

"Knowing you're catching former big leaguers and future big leaguers, it's a pretty big honor and it's really cool. They can spot where they want it, throw it in the dirt when they want it. It's fun to watch back there," Farmer said. "I'm putting down fingers and they're the ones getting the outs. I'm just putting down suggestions."

"Kyle's swing has been tremendous this season, particularly from the waist down," Kapler said. "His hips and back leg have been especially explosive. He has held his posture well and has identified pitches he can drive."

Farmer was 2-for-12 after three games with the Quakes, when Dodgers roving hitting instructor suggested something to Farmer before an April 13 game.

"He said this one thing about using my hands a different way, and that game I got three hits. From then on, I just kind of clicked. Hitting is and up and down thing. Once you have a routine with what you want to do, you just have to stick with it and stay with your approach," Farmer recalled. "As long as you have a good approach, you can hit anywhere."

Farmer was 3-for-5 with a home run at Inland Empire that night and went 19-for-44 (.432) before his first promotion to Double-A Tulsa to fill in for some catching injuries in the system. After some time back with Rancho Cucamonga, Farmer was promoted again on June 12.

"It's his leadership and his ability to connect with pitchers that has shined. He's been an exemplary teammate." -Gabe Kapler on Kyle Farmer

The college infielder has also played 10 games at third base and nine games as designated hitter this season, after exclusively catching in 2013-2014. The reasoning is two-pronged.

"Playing as many positions as you can is a good thing. It gives you versatility. But it also gives my legs a break, which is needed," Farmer said. "Last year I was doing well in the Midwest League, and then I got called up to the Cal League and I was done. My legs were toast. I was catching four to five days a week, in my first full season of catching. I was tired."

Now in Double-A, Farmer, who turns 25 on Aug. 17, is one step closer to the major leagues.

"It's something that's in the back of your mind, but you have to keep working every day. You never know how close you are and how far you are. You just have to keep working, keep grinding it out, and keep learning," Farmer said. "Everybody's dream is to get to the big leagues, and that's definitely mine. I know I have some work to do behind the plate, catching. I don't know how far away it is, and hopefully it's sooner rather than later, but I'm just out trying to win a ballgame every day."

So far, that approach is working quite well.