'The Best Team Money Can Buy' an enjoyable, quick read

Share All sharing options for: 'The Best Team Money Can Buy' an enjoyable, quick read

I will admit that I was skeptical at first about 'The Best Team Money Can Buy: The Los Angeles Dodgers Wild Struggle to Build a Baseball Powerhouse,' Molly Knight's new book about the 2013-2014 Dodgers.

Not because of Knight, an experienced writer for multiple publications, most notably ESPN, one who has been around the game for the better part of a decade, including covering scores of Dodgers games and courtroom appearances. 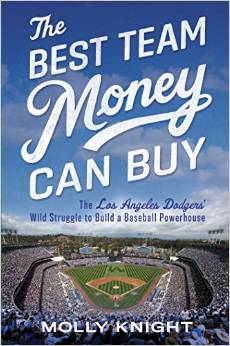 Mostly, I wondered what else was there to say about a team that hasn't really won anything in the last two years? I have never been a championship-or-bust person, because baseball and sports to me are much more about the long journey than any of the destinations, though those can be sweet. But I was skeptical of what kind of a market there would be for a book about a team that was tormented two straight years in the postseason by the Cardinals.

Knight's strength in this book is painting pictures and setting scenes, whether it's at Clayton Kershaw's house near Dallas the day his seven-year, $215 million contract was finalized, the bickering of Frank and Jamie McCourt, an apocryphal reference by then-GM Ned Colletti in a speech to the team, or a bizarre team meeting involving Yasiel Puig.

Much has been written and excerpted from this book about Puig, but in fact that is a relatively small portion of the book. The fact is, Puig was a key figure on the team since his major league debut in June 2013, so of course he's going to get written about.

Knight presents everything in the book, Puig or otherwise, fairly and with proper context.

I also underestimated just how much has happened to the Dodgers in the last few years. There was bankruptcy, the change in ownership, Puig mania, the 42-8 run, the rebuilt front office, mega contracts and mega trades. Knight covers them all, in an entertaining fashion.

There are several anecdotes from the book that others have covered, but here are two of my favorite, sort of random pickings:

The team dress code required players to wear slacks on travel days. Aside from those occasions - and when he was in uniform - one of Kershaw's goals for 2013 was to make it through the season without having to put on long pants (He made it a month before a forty-degree day in Baltimore forced him to change out of shorts and throw on a pair of jeans.).

Colletti reportedly was near a deal for Padres reliever Joaquin Benoit at last year's July 31 trade deadline, but it was nixed in part because the Dodgers analytic department thought there was too much risk for Benoit, due about $11.5 million through 2015 and with a balky shoulder:

The Dodgers analytics department was proven right immediately; Benoit reported shoulder soreness two weeks after Colletti had tried to trade for him. He pitched just five innings in the last seven weeks of the season.

That didn't stop Colletti from laying into one of the employees who he believed blocked the trade, on the flight back to Los Angeles from St. Louis. "Thanks for having my fucking back on Benoit," he was overheard saying to the man. The nerds had been right about Benoit and had saved the Dodgers millions of dollars and prospects. But in that moment it didn't matter much to Colletti. Had he traded for Benoit and watched the righty's arm fall off as a Dodger, at least he could say he had done something to try to help the bullpen and could blame the failure on the club's bad injury luck.

Admittedly, I am not much of a reader. But once I started this book, I could not put it down. I finished it in two sittings over two days.

This book comes out on July 14. If you like the Dodgers, or even if you don't but enjoy schadenfreude, I recommend this book. It is an enjoyable read.