Dodgers bullpen is better than it has shown

Share All sharing options for: Dodgers bullpen is better than it has shown

It’s hard not to be bearish on Dodger relievers. Their ERA is 4.12 (seventh-worst in the majors), and their once league-leading FIP has dropped to ninth at 3.43. In August alone, their ERA and FIP are 6.37 and 4.14, respectively.

But these recent struggles mask a core feature of the bullpen, which speaks to the way they control the strike zone.

Through the first 113 games of the season, Dodger relievers have struck out 26.7 percent of the batters they’ve faced, an MLB-high. They’ve walked 8.2 percent, placing them among the top 10. Their resulting strikeout-minus-walk rate of 18.4 percent leads all teams, and it has largely been consistent throughout the season. Before the All-Star break, the K-BB was 18.7 percent. Since then, it’s been 17.7 percent.

These numbers look even more impressive when we broaden the analysis beyond 2015. If the season were to end today, the Dodgers’ 18.4 percent K-BB would lead all bullpens over the past five years (the same could be said with a 20-year examination, but there’s not much point going back that far in light of how the game has evolved). The strikeout rate alone would rank second, trailing last year’s Yankees by just 0.2 percent. Moreover, the swinging-strike rate of 12.1 percent would be tied for second.

So, if Dodger relievers have missed bats and minimized walks, why have they continued to struggle? One reason stems from bullpen configuration and usage, which Jay Jaffe has discussed in detail. For example, Joel Peralta, who owns a 5.60 FIP and a 5.6 percent K-BB, has pitched the third most innings in relief since the All-Star break. That’s not a recipe for success.

But, even more broadly, Dodger relievers have accumulated a high batting average on balls in play. Their current .320 BABIP trails only the Phillies and Rockies by .001, and in the five-year analysis, it’s the sixth highest. Indeed, if we compare them to the other bullpens who round out the top 15 in K-BB since 2010, they’re the only ones with a BABIP over .300. They’re also the only ones with a BABIP over .320 in the top 75. 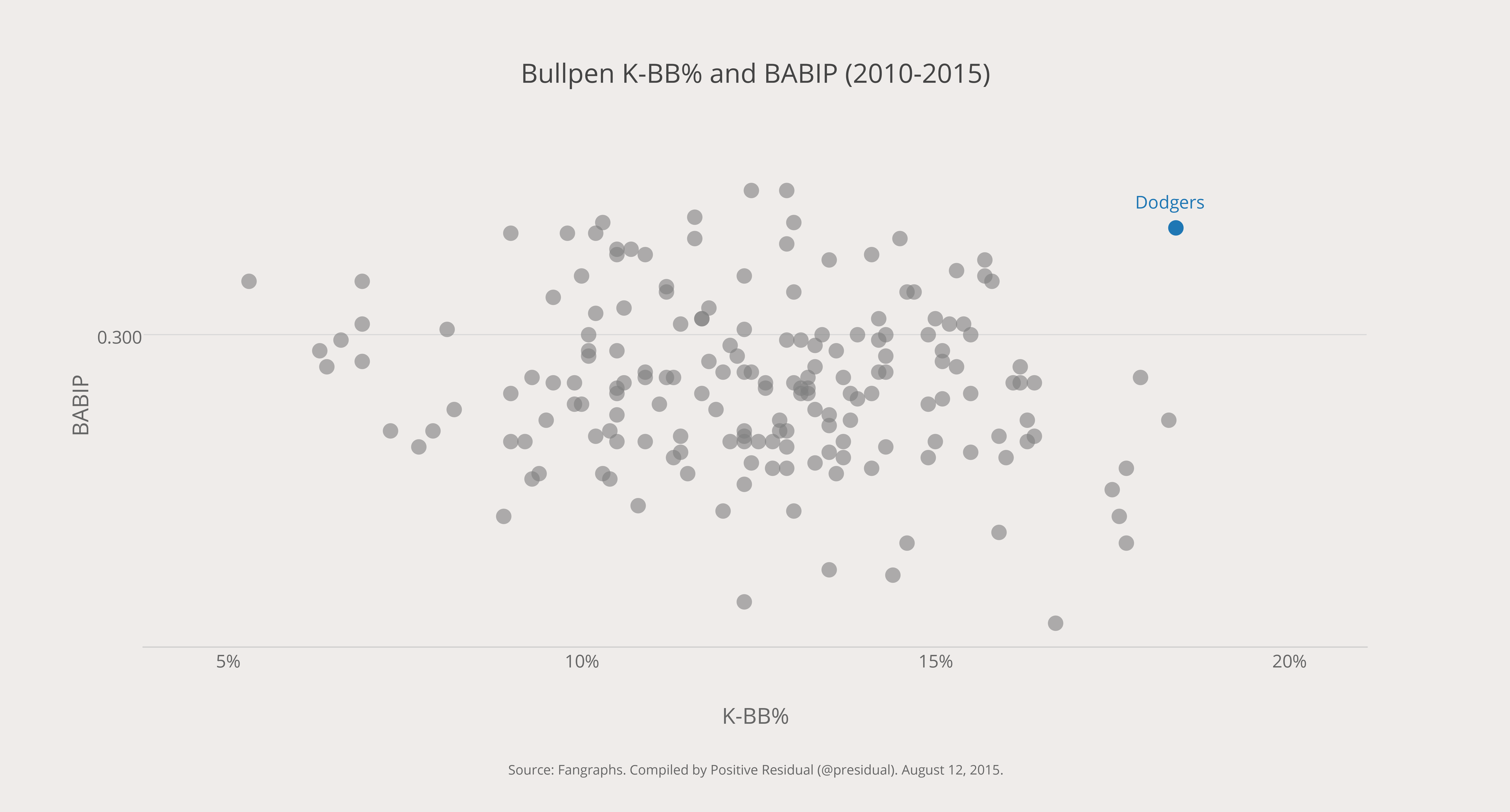 These anomalies suggest that Dodger relievers have seen their share of bad luck. Ordinarily, high strikeouts entail not just limited opportunities to put the ball in play, but also weaker contact when they do occur. Hence, the higher the strikeout rate, the lower the BABIP tends to be. This intuition, corroborated by research, serves as one of the key pillars for Skill-Interactive Earned Run Average, an estimator that helps determine whether a player or team’s ERA should have been higher, lower, or the same. Dodger relievers lead the majors with a 3.00 SIERA. In the same vein, the 0.70 difference between their ERA and FIP (the largest in the league) is another sign of possible misfortune.

On the flip side, high ground ball rates usually help the defense to convert grounders into outs, thereby lowering BABIP. Yet Dodger relievers have the worst rate at 40 percent. They also have the third-highest hard-contact rate at 30 percent, so we have to be cautious about overstating the influence of luck on their BABIP.

Nevertheless, it’s reasonable to expect a regression — if not to the level of a typical high-strikeout bullpen, then at least closer to league average. The Steamer Rest of Season Projections supports this notion. A cursory review of the relievers with the five highest projected innings (Kenley Jansen, J.P. Howell, Juan Nicasio, Pedro Baez, and Jim Johnson) shows a decline in BABIP while maintaining a 17.9 percent K-BB. Though it’s an inexact science, it aligns with how these numbers normally behave.

But there’s a crucial lesson here that goes above and beyond the prediction of future performance: it’s incredibly challenging to evaluate bullpens. It involves plenty of moving pieces, small sample sizes, and situational factors — all of which complicate our analyses. Even when the answers seem obvious, there are often many underlying issues still to consider.