Share All sharing options for: Looking ahead to possible Dodgers September roster additions

LOS ANGELES -- Believe it or not, we are only a week away from rosters expanding in September, when active roster limits across major league baseball expand from 25 to 40 players. Here's a look at who the Dodgers will likely add, and when they might add them.

First though, a note. To be eligible for postseason rosters (yes, the Dodgers still have October aspirations even if their play hasn't indicated as much of late) a player must either be on the active roster or on the disabled list by 9 p.m. PT on Aug. 31. But it's okay for players who are called up in September, too; the only requirement there is that the player was already in the organization (not even on the 40-man, just in the organization), replacing a player on the 60-day disabled list, and the Dodgers have plenty of those space-creating players, including Hyun-jin Ryu, Brandon McCarthy and Bronson Arroyo.

Manager Don Mattingly said the club has been talking for a few weeks about potential call-ups, with the players likely coming in waves.

These will be the players up for sure on Sept. 1. A third catcher is always the first to get the call, and both Bolsinger (the sixth starter, long-man reliever) and Liberatore (the third lefty) have already made big contributions to the major league team this season.

Jose Peraza could very well be among this first group of call ups given his versatility, as a pinch runner or as someone who could be a utility man all over the middle of the field.

The regular seasons for Triple-A Oklahoma City and Double-A Tulsa both end on Sept. 7, so some players could stay down longer.

Corey Seager is the consensus top prospect in baseball who is still in the minors, and very well could get the call in September, even if he doesn't play a ton, much like Joc Pederson last September. Pederson played in 18 of 25 games in September, collecting 38 plate appearances and starting three games. 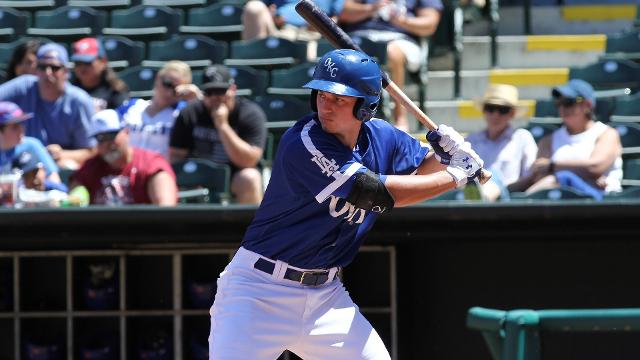 The one caveat and difference between Seager in 2015 and Pederson in 2014 is that Pederson needed to be added to the 40-man roster by November to be protected from the Rule 5 Draft. The Dodgers don't have to add Seager, a high school draftee in 2012, to their 40-man roster until November 2016, so if there are any reservations about Seager taking over at shortstop next April it might be prudent to keep him off the 40-man roster for now.

Then again, the Dodgers have 39 games in the final 41 days of the regular season beginning Tuesday, so if the club is intent on giving Justin Turner a day off at third base every fourth or fifth day, there is really nobody on the current roster who fits the bill at the hot corner. Sure, there has been lip service to Chase Utley becoming the backup third baseman once Howie Kendrick returns, or perhaps Kike Hernandez sliding over once in a while, but neither one of those are real third baseman, and Alex Guerrero is, well, Alex Guerrero.

Unlike Utley and Hernandez, Seager has actually played third base this year, 17 starts in the minors, and is a natural shortstop. Again, Seager is widely regarded as the top prospect in baseball, so from a talent standpoint he should probably be up with the big club, and given the positional fit the sooner the better.

Kendrick has been out since Aug. 9 with a hamstring strain, and figures to be back some time around the first week of September. He will probably need minor league rehab games first.

Joel Peralta will be due back once rosters expand, too, and probably conveniently not a moment before.

Carlos Frias is on the 60-day DL with back tightness, and will be eligible to return as early as Aug. 30, though waiting a few more days seems the most likely tact. But if healthy, the Dodgers would almost certainly add Frias, who could be a bullpen wild card.

Yimi Garcia will certainly be back up, but will have to wait 10 days unless replacing an injured player, so look for him on Sept. 3.

Outfielder Scott Schebler and left-handed pitcher Ian Thomas are possible additions as well, whether it is a few days after Sept. 1 or after Oklahoma City's season ends.

"I think generally guys don't need to be here for no reason. If there isn't a reason, more is not the merrier," Mattingly said last week. "We're in a pennant race, and if you get guys who aren't invested it's not the best scenario."

Starting pitchers Zach Lee and Joe Wieland are other options, though I wouldn't bet on it.

Others on the 40-man roster, like pitchers Josh Ravin and Daniel Coulombe, and infielders Ronald Torreyes and Andy Wilkins, are on the fringe. They potentially could be brought up, or they could be roster casualties if the Dodgers need to add players to the 40-man roster, whether acquired by Aug. 31 or otherwise.

Which brings us to the most intriguing part...

You can't swing a dead cat without hitting multiple people reminding you just how bad the Dodgers bullpen is since the All-Star break, and with pickings potentially slim on the waiver trade market the most likely chance for improvement just might be from within.

The Dodgers already promoted starters Chris Anderson and Jharel Cotton to Triple-A to work in relief as a mini tryout for possible major league work. Back in Tulsa, there are two more options with Julio Urias and Jose De Leon.

Urias, who just turned 19, is the pitching jewel of the system, up near Seager-level on most national prospect lists. He has 80 strikeouts against just 16 walks in 70 innings this season, including a 28.6-percent strikeout rate in Double-A, almost all as an 18-year-old.

He missed over a month in the middle of the season with elective eye surgery, a cosmetic procedure which also served as a convenient way to limit his innings, keeping room on the odometer should the Dodgers need Urias come September and October. 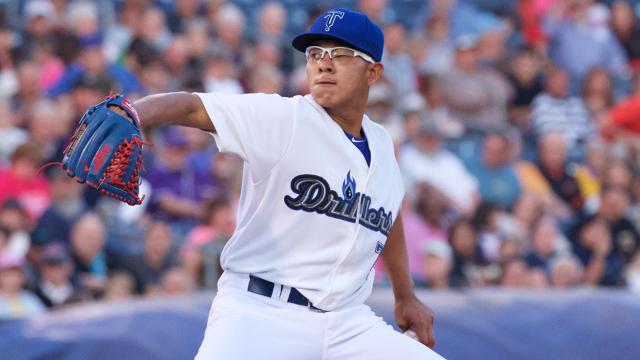 Urias if he pitches for the Dodgers in September will be the youngest Dodgers pitcher since Charles Osgood (17 years, 208 days) on June 18, 1944 (during World War II). [Photo: Rich Crimi | Tulsa Drillers]

"I think he's okay innings-wise. They planned it so if that was something we'd want to do he'd be okay," Matttingly said. "There have been teams to have young guys come up. K-Rod came up with the Angels and lit the world on fire. All the players in the world, they got an opportunity somewhere. At some point they were young players. I'm not opposed to young guys at all, so we'll see where it goes."

Urias has thrown 70 innings this season compared to 87⅔ innings in 2014. Similarly, De Leon has 105 innings in 2015 after 77 in 2014. His innings were limited by a three-week DL stint, and since returning has been on a pitch count limit, perhaps making him an option as well.

Francisco Rodriguez is the best example of a player not on the 40-man roster (but in the organization) on Aug. 31 who still helped a postseason team, replacing the injured Steve Green for the 2002 Angels. Rodriguez struck out 13 of 21 batters faced in September, then struck out 28 with five walks in 18⅔ innings in the postseason with a 1.93 ERA, winning five games in relief for the World Series champs.

Mattingly tried to limit expectations should Urias join the Dodgers down the stretch.

"I don't think it's fair to throw [K-Rod] on him. He's still a young kid developing," Mattingly said. "Andrew [Friedman, president of baseball operations] and development are going to do what's best for him, hopefully maturing into a starter."

Another Urias comp, fair or not, could be fellow left-handed Mexican pitcher Fernando Valenzuela, who pitched for the Dodgers in September 1980 during a pennant drive and allowed only two unearned runs in 17⅔ innings. That was just a prelude to Fernandomania, which began the next year.

It's not fair to Urias to expect him to live up to such expectations, but it would be pretty exciting and pretty special if he joins the Dodgers in September.