Alex Wood and the knuckle curve

Share All sharing options for: Alex Wood and the knuckle curve

Most of us will remember Alex Wood’s Dodger debut for the rare balk that he was charged while delivering an errant pitch. But there was another rarity during the game. Although it was more subtle, it seemed to illustrate why Wood was an appealing trade target, what his Dodger career might look like, and how the front office identifies and develops talent.

Over 6⅓ innings, Wood threw 109 pitches, of which 41 were knuckle curves. This 38% rate marked the first time in 56 career starts that his knuckle curve outnumbered his fastball (35%). Moreover, his knuckle-curve usage was a personal high, registering over three standard deviations above the mean — in other words, a real outlier: 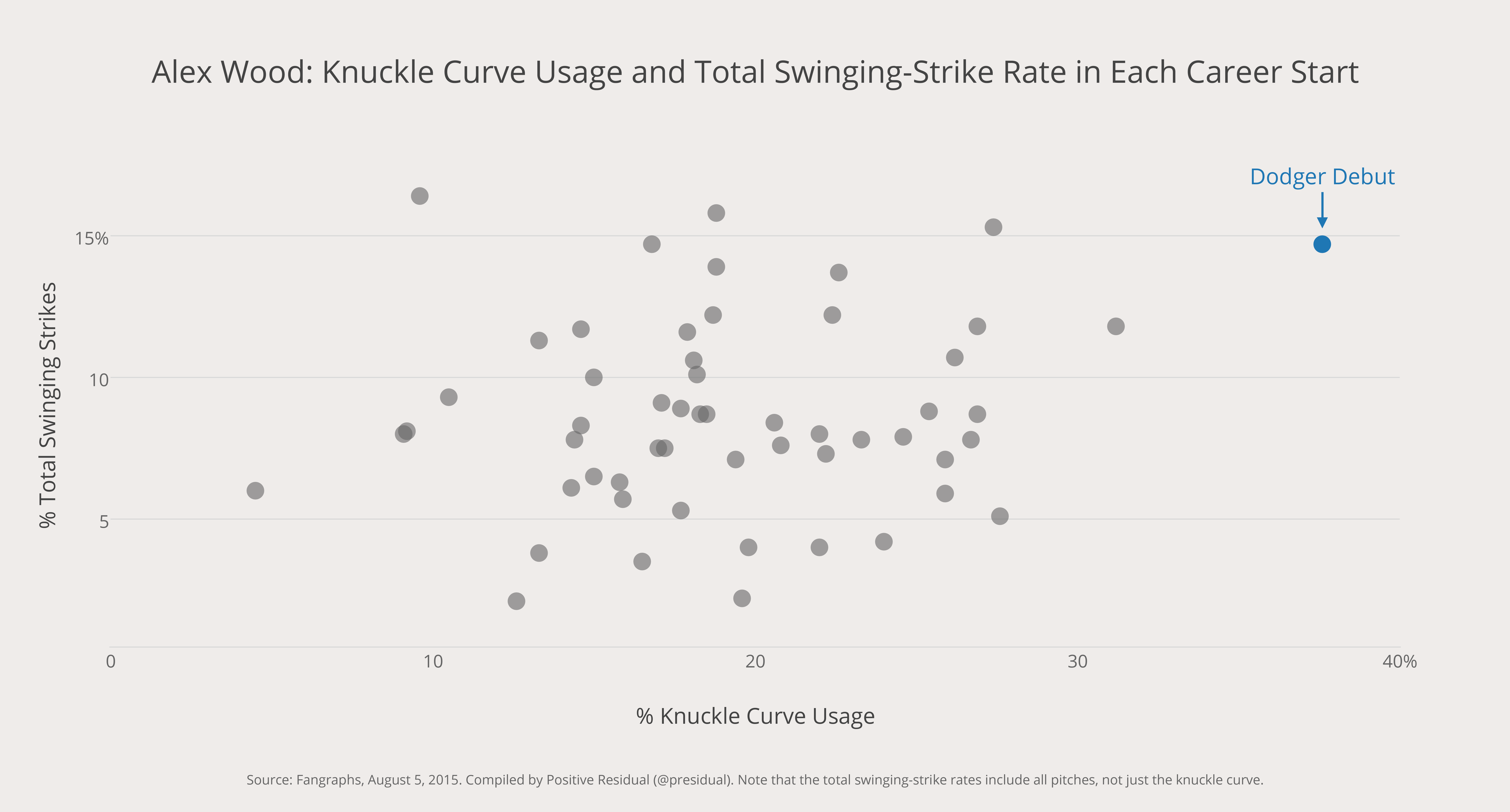 It is highly unlikely for this kind of usage to occur by chance. So why might the Dodgers have designed such a pitch-selection strategy?

For starters, the knuckle curve is Wood’s most potent weapon. In 323 lifetime plate appearances against this pitch, opponents have generated a paltry .209 wOBA and 40 wRC+, which is roughly the equivalent of producing 60 percentage points below league average through half a season. By contrast, his fastball has yielded .321 / 111 and his changeup .332 / 121.

The knuckle curve has worked well for Wood because it misses bats. As the chart above suggests, it has induced a 15-percent swinging-strike rate on its own, leading to a 41-percent strikeout rate against a 4-percent walk rate. When hitters have put the ball in play, they’ve pounded it to the ground 59 percent of the time. They’ve hit just one career home run against it.

Overall, Wood’s knuckle curve is at an elite level. Since entering the league in 2013, it’s been the second most valuable pitch of its kind, saving 10.4 runs above average by itself. That’s based on a career usage rate of 20 percent. The Dodgers likely saw these numbers, figured it had untapped potential, and sought to ramp up its frequency closer to A.J. Burnett, who threw arguably the best knuckle curve in the game at a 30-percent clip.

If this story sounds familiar, it’s because we saw a similar one unfold with Mike Bolsinger. When he pitched for the Arizona Diamondbacks last year, his curveball flashed an 11-percent swinging-strike rate, a 33-percent strikeout rate, and a 60-percent ground ball rate. But he used it just 32 percent of the time, so his overall performance (5.50 ERA and 4.01 FIP) eventually led to his trade for cash considerations.

As we know, things changed for the better when he joined the Dodgers. His ERA and FIP improved to 2.83 and 2.86 alongside an increase in curveball usage to 46 percent. Among starters with at least 80 innings and 10-percent usage, Bolsinger’s spinner ranked sixth — on par with the likes of Matt Harvey and Sonny Gray.

This is not to suggest that Wood is destined to follow every one of Bolsinger’s footsteps. For one thing, Wood is younger and has more upside, so his ceiling is theoretically higher. For another, Bolsinger’s 46-percent usage seems extreme in light of Wood’s baseline pitching profile. But Bolsinger does provide hints as to how the Dodgers might get more out of Wood than the Atlanta Braves did.

In general, Bolsinger and Wood shed light on the front office’s approach to player acquisitions. The Dodgers might boast the highest payroll in the league, but they also have organizational goals (namely, rebuilding the farm system and maintaining long-term flexibility) that impose financial constraints on their pursuit of talent. These constraints require Andrew Friedman, Farhan Zaidi, and their staff to search for fundamentally skilled players whose true values are obscured by correctable issues. Like every other operation, they seek "buy-low" candidates who can potentially bring high rewards.

Numerous factors can diminish the value of an otherwise productive player. Pitch selection is one example, as are mechanics, injury history, and defensive support, among many others. Interestingly, each of these issues seems to have dropped Wood’s price tag, and the Dodgers are betting that they have the personnel to address them. For his release-point problems, he might benefit from working with Rick Honeycutt, who has sharpened the techniques of many pitchers before him. Similarly, Stan Conte’s expertise in Tommy John surgery can help Wood to avoid a revision. And, while the Braves’ two primary catchers rank among the bottom ten in pitch framing, Yasmani Grandal is at the top, which likely entails extra strikes for Wood.

In the end, Wood is the product of the Dodgers’ own brand of "Extreme Moneyball." There are no guarantees that he’ll play a pivotal role in their postseason hunt or that he’ll help anchor their rotation in the future. But it’s evident that his acquisition is the culmination of strategic, systematic thinking about how talent is assessed, valued, and developed. That’s something Dodger fans can continue to expect.

Positive Residual is the nom de plume of a Los Angeles sports enthusiast who writes about innovations in baseball and basketball, with a special emphasis on the Dodgers. Follow him @presidual.