3 straight postseason appearances would be a Dodgers franchise first

Share All sharing options for: 3 straight postseason appearances would be a Dodgers franchise first

As the Dodgers close in on a potential National League West title, it is important to note just how significant another divisional crown would be this season. After all, the Dodgers have never been to the postseason for three straight seasons.

It seems absurd when first hearing or reading those words. The Dodgers haven't been to the World Series in 27 years, but they have a rich and storied history on par with the upper echelon of National League teams. From 1947 to 1966 the Dodgers won 10 NL pennants in 20 years.

But in the first 131 years of the franchise, the Dodgers have never been to the postseason for three years running.

Part of this is obviously tied to the fact that the only way to get to the postseason through 1968 was to have the best record in the league, with only the World Series. But of the 20 franchises that were around as far back as 1968, only the Reds, White Sox and Mets join the Dodgers as teams without three straight postseason appearances.

Here's a look at the near misses for the Dodgers.

This is a sketchy inclusion at best. The 1889 Brooklyn Bridegrooms had the best record in the American Association then lost to the National League champion New York Giants, six games to three (six games? red flag number one!).

Then in the Dodgers' first season in the National League in 1890 advanced to the sort-of World Series, 13 years before the real World Series existed. Brooklyn in 1890 tied the Louisville Colonels in the "World Series," three games apiece plus one tie (red flag number two!).

In 1891, the Dodgers won their opening game but then lost their next six contests, and never got closer to 1½ games behind first place. The club finished 61-76, sixth place among eight NL teams.

The club only used six pitchers all season, including Jesse Orosco.

This was the beginning of the apex for the Dodgers, a 20-year run that saw the club win 10 pennants, and most of the time in the first decade of that run of excellence came bitter season-ending losses. The Dodgers won the pennant in 1947 and 1949, but didn't really contend at all in 1948.

In 1950 the Dodgers were battling the Whiz Kid Phillies down the stretch, and beat the Phillies in Brooklyn on the penultimate day of the season setting up a showdown on the season's final day, with the Dodgers needing a win to force a three-game playoff.

Don Newcombe and Robin Roberts battled for 10 innings each, with Newcombe on three days rest, or at least he would have been if he didn't earn a save two days earlier. But Newcombe allowed a three-run home run to Dick Sisler in the 10th, giving Philadelphia a 4-1 win and a trip to the World Series.

A few years back on a broadcast, Vin Scully talked about the Sisler home run, which came in Scully's rookie season as an announcer, and recalled thinking the shock and pain of losing could ever be so immense.

The 1951 collapse has been well covered, arguably the most famous collapse in baseball history. The Dodgers held a 13-game lead over the second-place Giants with 48 games left to play, but New York went 37-7 down the stretch to tie Brooklyn, then won a three-game playoff with Bobby Thomson's "Shot Heard 'Round the World" the final crushing blow. 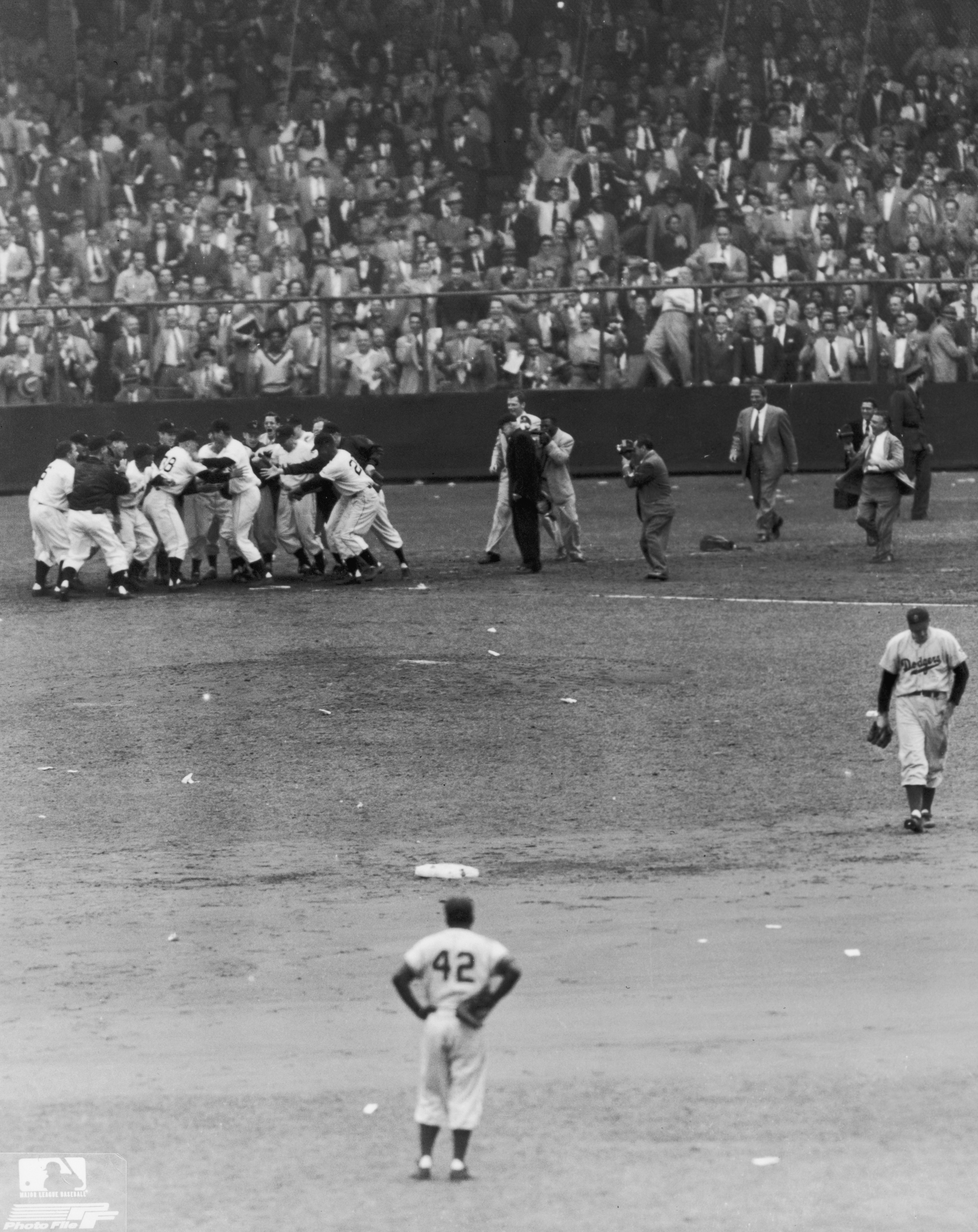 With a 4-1 lead and one out in the ninth inning of the decisive third game of the 1951 NL playoff, and with the Dodgers advancing to the World Series in 1952 and 1953, this was the closest the Dodgers actually got to three straight postseason appearances.

Before you ask, the three-game playoff in 1951 (or the one in 1962) is not the postseason; those are regular season games.

The Dodgers were tied for first place as late as June 13, and were only a half-game out on Aug. 15, with 39 games remaining.

After two more pennants in 1955 and 1956, including the franchise's first World Series win in 1955, Brooklyn moved on without Jackie Robinson in 1957, but finished a distant third, 11 games behind Milwaukee. The Dodgers were 1½ games out of first place on July 28.

This is a bit of a stretch, since the Dodgers won the World Series in 1963, but it's worth looking into because the Dodgers lost another three-game playoff to the Giants in 1962, one of just six 100-win seasons in franchise history.

In 1961, the Dodgers were one game back on Sept. 6, with 22 games remaining but would finish four games behind the pennant-winning Reds. 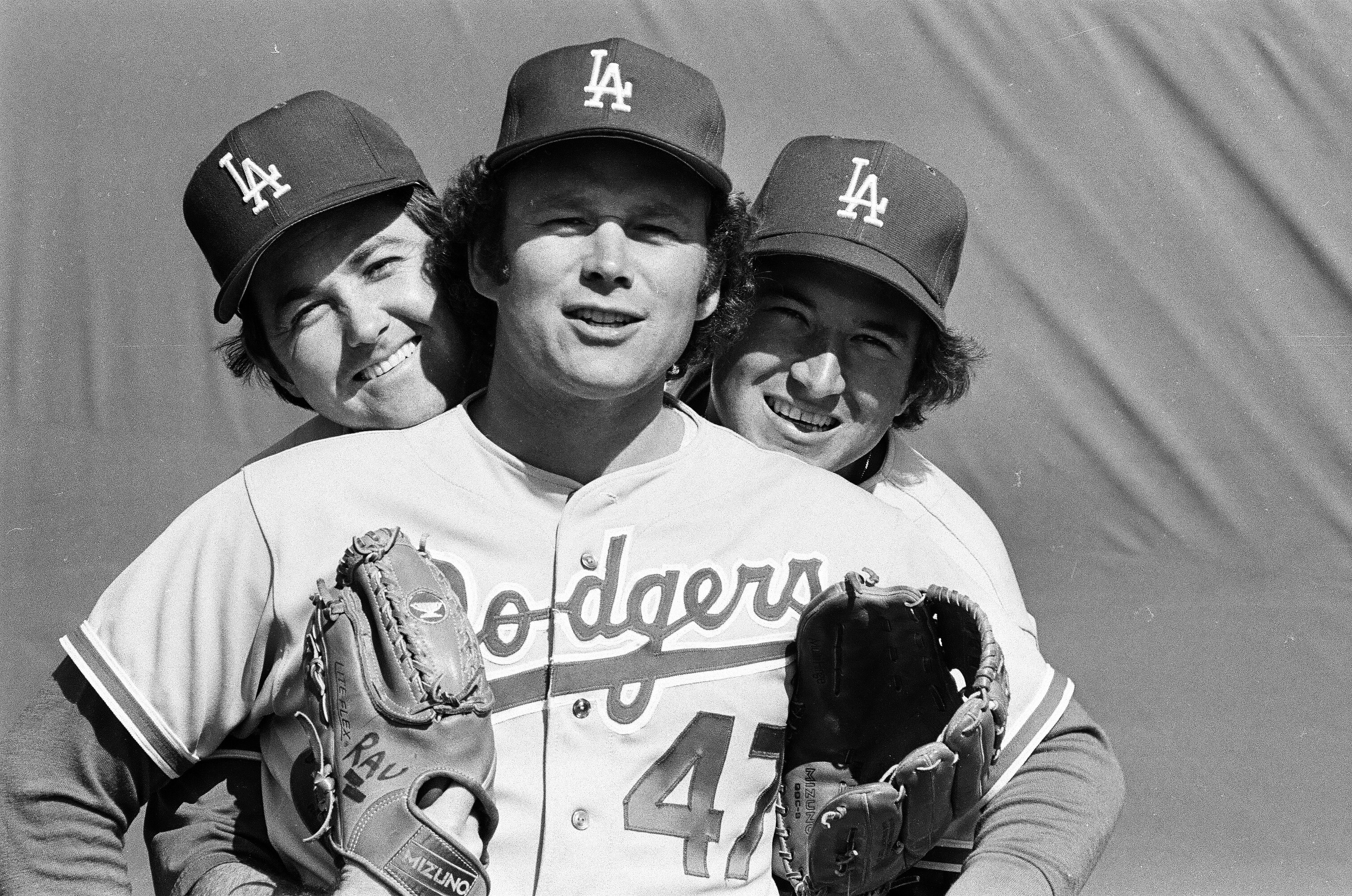 The 1979 Dodgers were set to contend until Doug Rau, Andy Messersmith and Charlie Hough posed for this. (Photo: Getty Images)

After back-to-back World Series losses to the Yankees, the Dodgers scuffled out of the gate, then suffered a June swoon with a 7-20 month that ended any hopes of contention. Davey Lopes nearly became the first 30-30 player in Dodgers history, with 28 home runs and 44 steals, but gave up his captain duties in July in frustration.

The Dodgers have had five captains in their history, but not one since Lopes.

The Dodgers surrounded their 1981 World Series title with a pair of close calls. The 1980 season featured arguably the greatest three-game series in Dodger Stadium history in the season's final weekend. The Dodgers trailed the Astros by three games with three to play, but swept Houston over the weekend with three one-run wins to force a one-game playoff, in Los Angeles on Monday.

Free agent bust Dave Goltz started Game 163 and lost, giving the Astros the division, and scared the Dodgers away from free agency for seven seasons.

In 1982, the Dodgers and Braves embarked on one of the most heart-racing roller coaster rides in NL West history. After play on July 29 the Dodgers found themselves in third place, 10½ games behind Atlanta, but 12 days later the Dodgers were in first place, a game up, thanks to a 12-1 stretch that included two four-game sweeps of the Braves.

The teams were back-and-forth the rest of the way, and were tied atop the division with six games left. Needing a win on the season's final day to force a one-game playoff with the Braves, Dodgers pitcher Terry Forster allowed a three-run home run to Joe Morgan in the seventh inning, lifting the Giants to a spoiling win.

After winning the NL West in 1995 and capturing the wild card in 1996, the Dodgers were two games up on the Giants with 11 games left, heading into a two-game series in San Francisco.

The Dodgers lost the first game 2-1 thanks to Barry Bonds hitting a two-run home run and doing a pirouette in the first inning against Chan Ho Park, but it was the second game of the series that was most frustrating.

A bases-loaded, nobody out situation against Rod Beck in the 10th inning turned into nothing with a strikeout by Todd Zeile and a double play by Eddie Murray on his last legs. Then, Brian F. Johnson hit Mark Guthrie's first pitch of the 13th inning for a game-winning home run, sending the Dodgers home tied with nine games left. 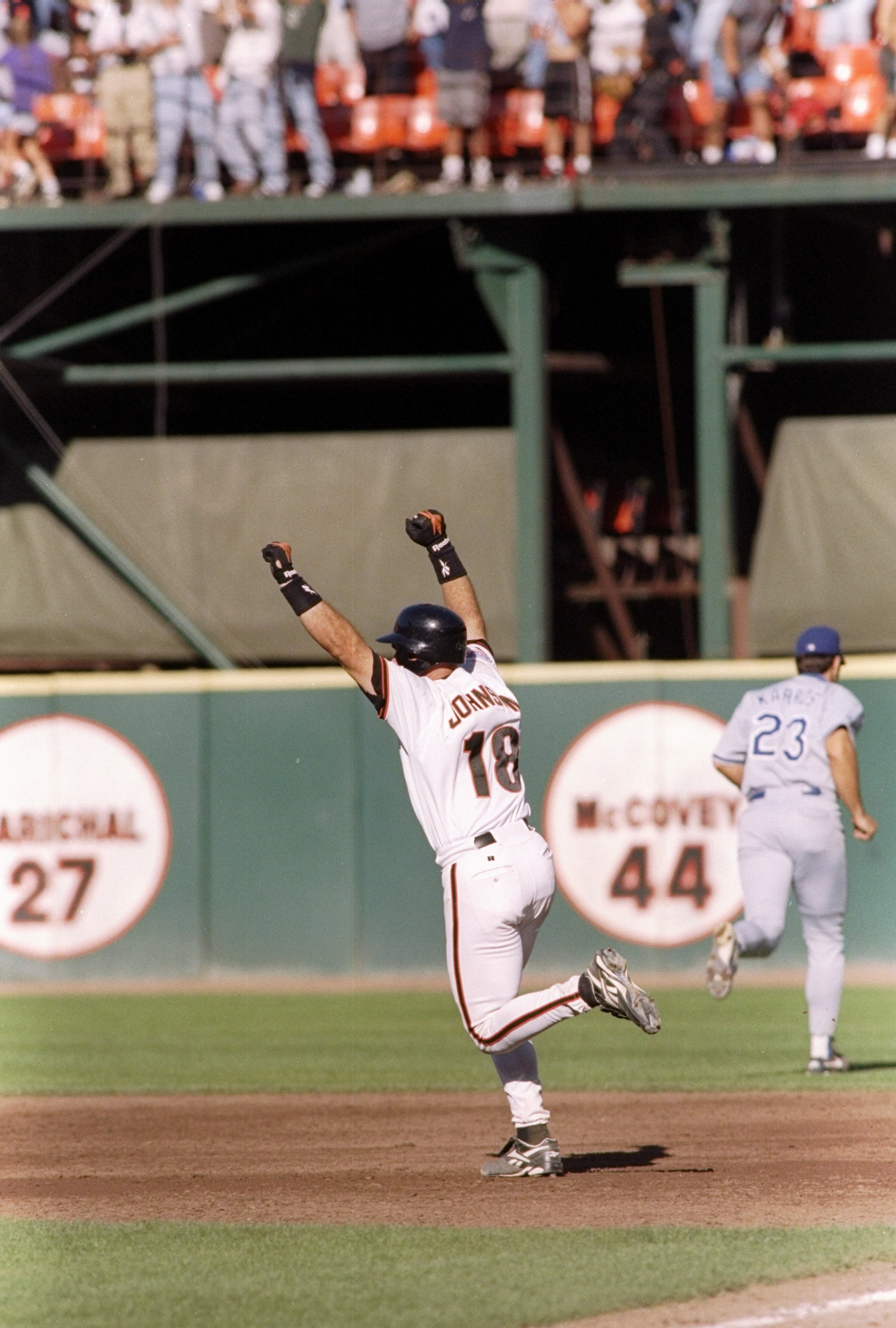 Brian Johnson finished off a frustrating two-games for the Dodgers. (Photo: Getty Images)

A three-game sweep by the Rockies in Los Angeles sealed the Dodgers' fate, and they finished two games out.

This is another loose stretch, but with playoff appearances in 2004 and 2006 the Dodgers at least had a chance for three straight Octobers. A 12-1 start quickly turned sour, and a 91-loss campaign led to a house cleaning.

The dysfunction of 2005 can be summed up in one sentence: General manager Paul DePodesta and manager Jim Tracy fought over Hee Seop Choi and Jason Phillips, and by Halloween all were gone.

Two more division titles and two NLCS losses to the Phillies were followed with expectations unmet in 2010. The Dodgers were tied for first place as late as June 17, but three straight losing months sent the team to an 80-win season that ended with Joe Torre's resignation, saying the club needed a different voice at the top.

This is another stretch, looking to tack on to the front of a two-year stretch (NL West crowns in 2013 and 2014) rather than at the beginning. The Dodgers got off to a hot start, and were a half-game up in the NL West as late as Aug. 19.

Guggenheim Partners took over as owners in May, and immediately flexed their financial muscles, acquiring Hanley Ramirez in July and adding $270 million in payroll commitments in the Punto Trade in August. But the team fizzled down the stretch, going 19-21 after Aug. 19.

The division was long gone, but the wild card was still in play, though the Dodgers finished two games behind the Cardinals for their playoff berth.

The Dodgers on Thursday morning, with 23 games remaining in the season, have between a 99.6-percent and 99.8-percent chance of making the playoffs. When they do, it will make history.