Dodgers have clinched in San Francisco before

Share All sharing options for: Dodgers have clinched in San Francisco before

The Dodgers have a unique opportunity before them, needing to win one of four games against the Giants at AT&T Park to clinch an unprecedented third straight National League West division title. Should the Dodgers find a way for their first victory in the Bay Area of 2015, the Dodgers will clinch a division crown in San Francisco for the first in 38 years.

First, a caveat: the Dodgers did celebrate in San Francisco one other time, clinching a playoff spot at AT&T Park with a win in 2006 on the second-to-last-day of the season. The division was still up for grabs, but the Dodgers ended up tied with the Padres, who held the tiebreaker and were the NL West winners, with the Dodgers taking the lone wild card spot.

That 2006 Dodgers team won their final seven games of the season, finishing with momentum coming out the wazoo, which propelled Los Angeles to ... getting swept in the first round by the Mets. 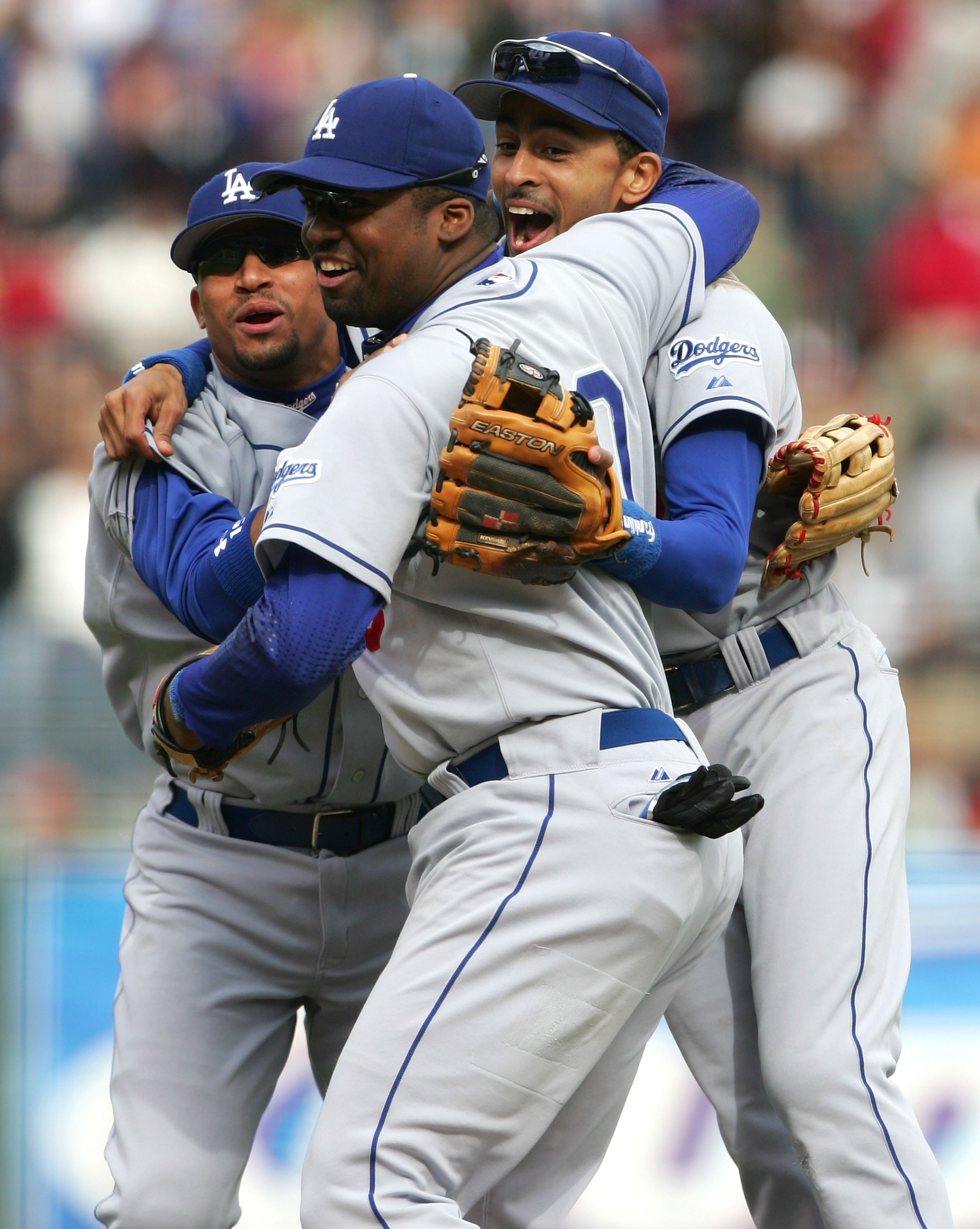 The playoff-bound trio of Furcal, Betemit and Lugo celebrated at AT&T Park

But let's look back to 1977, the only time the Dodgers have clinched the division on the field of their fiercest rival.

In the 1970s, the Dodgers' biggest rival was actually the Reds, and The Big Red Machine was coming off back-to-back World Series titles in 1975 and 1976. The Giants after winning the NL West in 1971 never finished higher than third in the six-team division for 15 straight seasons, with only five winning seasons during that span.

In 1977, the Dodgers started the year 22-4 and after the opening month never saw their lead over Cincinnati shrink below 6½ games.

The Dodgers had a chance to clinch at home on Sept. 18, but they lost to the Braves 9-8 at Dodger Stadium.

"It's a shame we couldn't clinch at home," first-year manager Tommy Lasorda told the Associated Press.

Both the Dodgers and Reds were off on Monday, Sept. 19, but the Dodgers led by 11½ games with 12 to play; Cincinnati had 11 games remaining. The Dodgers' magic number was one.

"It's inevitable," third baseman Ron Cey told the AP before a two-game series at Candlestick Park against the Giants, at 69-82 and in fourth place, 22½ games back.

Tommy John started on the mound, at 34 years old and in his second year back after the elbow reconstruction surgery that now bears his name. Future Dodger Derrel Thomas led off the first inning against John with an infield single, then advanced to third thanks to a walk and a passed ball. But he was cut down on the plate by Cey on a ground ball by future Dodger Bill Madlock.

That was the Giants' best chance at a run in the first eight innings against John, who would win his 19th game that night. John would end the season with 20 wins.

All the runs of support John would need came in the second inning against Giants starter Ed Halicki. Steve Garvey singled and stole second, then scored on a double by Dusty Baker. Rick Monday followed with a two-run home run, giving the Dodgers a 3-0 lead.

"I feel like a kid right now," Monday told Barry Wilner of the AP. "If anyone said this game doesn't excite you, they're crazy."

Back in 1977, the Dodgers beat the Giants 3-1, clinching their second NL West title.

"Once we had the lead, we felt all along that if we stayed healthy we were going to win it," Cey told Eric Prewitt of the AP. "A lot of things had to go right — and they did."

September 20 is the second-earliest Los Angeles Dodgers clinching by date, trailing only the Sept. 19 clinch in 2013. But it remains the earliest by schedule, the 151st game of the season.