Share All sharing options for: Dodgers Week 22: Creating distance in the division

The Dodgers had their most satisfying week of the year, with three one-run victories against the rival Giants to help create some distance in the division, including stellar performances by Zack Greinke and Clayton Kershaw against San Francisco.

The much-maligned bullpen came up large in the first two wins against the Giants, had one bad game, then played shut down baseball to close out three more wins against the Padres in San Diego.

The Dodgers won games with power, setting a season high with five home runs on Friday night in San Diego, and created runs with speed, stealing 12 bases in 13 attempts.

Top prospect Corey Seager made his major league debut and melded quite nicely into the mix, even hitting fifth in the lineup in his second big league game. Fellow rookie Scott Schebler hit his first major league home run, and Aug. 31 acquisition Justin Ruggiano has already paid dividends with a pair of run-scoring pinch hits, including a home run.

The end result was six wins in seven games, and the two-time defending National League West champions cementing themselves as the class of the division.

Dodger Batter of the Week: Chase Utley hit his first two home runs as a Dodger, and doubled three times, hitting .348 (8-for-23) for the week. He had the game-winning home run on Wednesday against the Giants, completing the three-game sweep.

Honorable mention goes to Andre Ethier, who remained hot, and to Carl Crawford, who hit .357 (9-for-26) with three doubles and three steals.

Dodger Pitcher of the Week: Clayton Kershaw completed his win over the Giants on Wednesday tying career highs in both strikeouts (15) and pitches (132) to take the honor, reaching a new career high in strikeouts in a season with 251. Zack Greinke was also excellent, allowing one run and pitching into the eighth on Tuesday against San Francisco, and manager Don Mattingly showed an unusually long leash with Alex Wood on Saturday and was rewarded with seven scoreless frames. 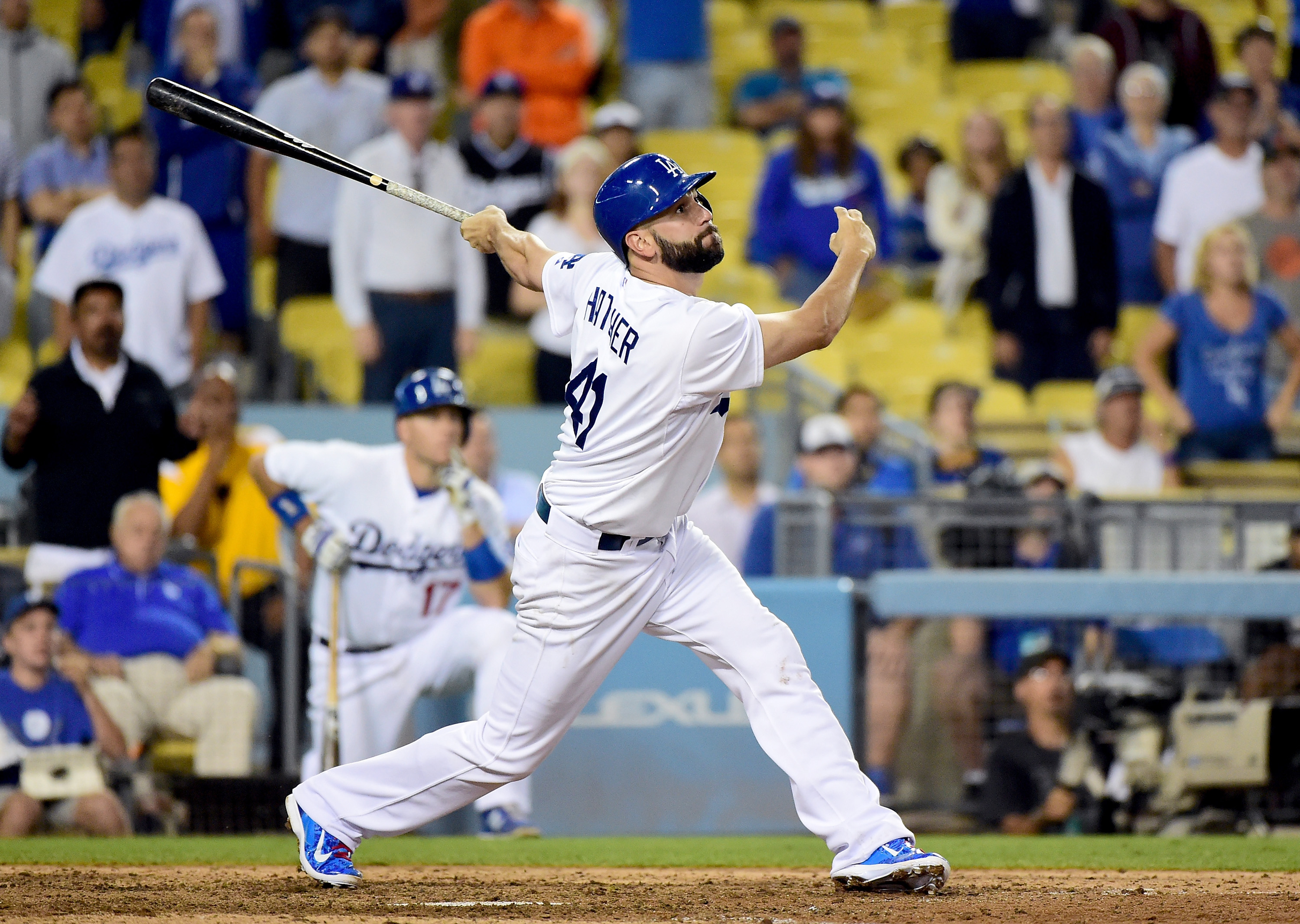 The first of three straight one-run wins over the Giants included two pitchers batting aside from the starter, and a combined nine innings of strong relief from a much-maligned crew before a walk-off victory. (Photo: Harry How | Getty Images)

Monday: Outfielder Justin Ruggiano was acquired with cash from the Mariners for a player to be named later or cash considerations.

Monday: Outfielder Chris Heisey, who was with the Dodgers for the first four months of the season, was acquired from the Blue Jays for a player to be named later or cash considerations.

Thursday: Top prospect Corey Seager was called up from Triple-A, and relief pitcher Yimi Garcia was recalled from Oklahoma City once his 10-day optional assignment was up; Andy Wilkins was designated for assignment to make room for Seager on the 40-man roster.

Sunday: Heisey was called up from Triple-A; to make room on the 40-man roster, relief pitcher Daniel Coulombe was designated for assignment.

Sunday: Wilkins was claimed off waivers by the Orioles.

The Dodgers run the Jason Bulger gauntlet, finishing off a 10-game road trip with three games in Anaheim and three more in Phoenix. These pitching probables are my estimates beyond Tuesday.