The Dodgers' pending deal with pitcher Kenta Maeda gives them another in a growing legacy of Japanese-born pitchers for the franchise.

Again, it is important to note that the Dodgers' deal with Maeda isn't yet finalized, something that could take days to complete per Jeff Passan of Yahoo. We don't even know the terms of the deal, though it is expected to be at least five years (per Joel Sherman of New York Post) and possibly as long as eight years (per Christopher Meola).

But should the contract with Maeda come to fruition, he would be the eighth Japanese-born player in Dodgers history. Two were position players, including new Dodgers manager Dave Roberts (his mother is Japanese, and he was born in Okinawa) and infielder Norihiro Nakamura.

Pitching is where the Dodgers have made their mark, with starters Hideo Nomo, Kazuhisa Ishii and Hiroki Kuroda, and relievers Takashi Saito and Masao Kida.

Japanese-born pitchers have won 761 major league games, with 170 wins coming as Dodgers. The Red Sox are next-best, with 115 victories from Japanese pitchers.

The Dodgers also have accounted for 19.4 percent of all major league innings pitched by Japanese-born pitchers, with 2,595⅔ of 13,323⅓ innings through 2015 coming with Los Angeles.

The Dodgers also agreed to a three-year deal with Japanese pitcher Hisashi Iwakuma in December, only to see that fall apart because of a reported failed physical. Iwakuma ended up returning to Seattle on a one-year contract plus incentives, with a guarantee ($12 million) less than a third of the Dodgers' deal ($45 million).

Maeda, heading into his age-28 season, is seven years younger than Iwakuma, and with no recent history of arm trouble. Maeda threw 206⅓ innings in 2015, the fourth time in the last six years he topped 200 innings in the Japanese Central League, and has averaged exactly 200 innings per season the last seven years.

It was Nomo who opened the floodgates for Japanese players to join the majors over the last two decades. When he signed with the Dodgers in 1995, he was just the second Japanese-born player to appear in the majors, and he made an immediate impact.

Nomo in his first season set a Dodgers' franchise record with 50 strikeouts over a four-start stretch, and set a franchise rookie record with 236 strikeouts, which led the National League. He made the All-Star team as the starting pitcher, won Rookie of the Year, then followed that up in 1996 with the unthinkable, a no-hitter at Coors Field. 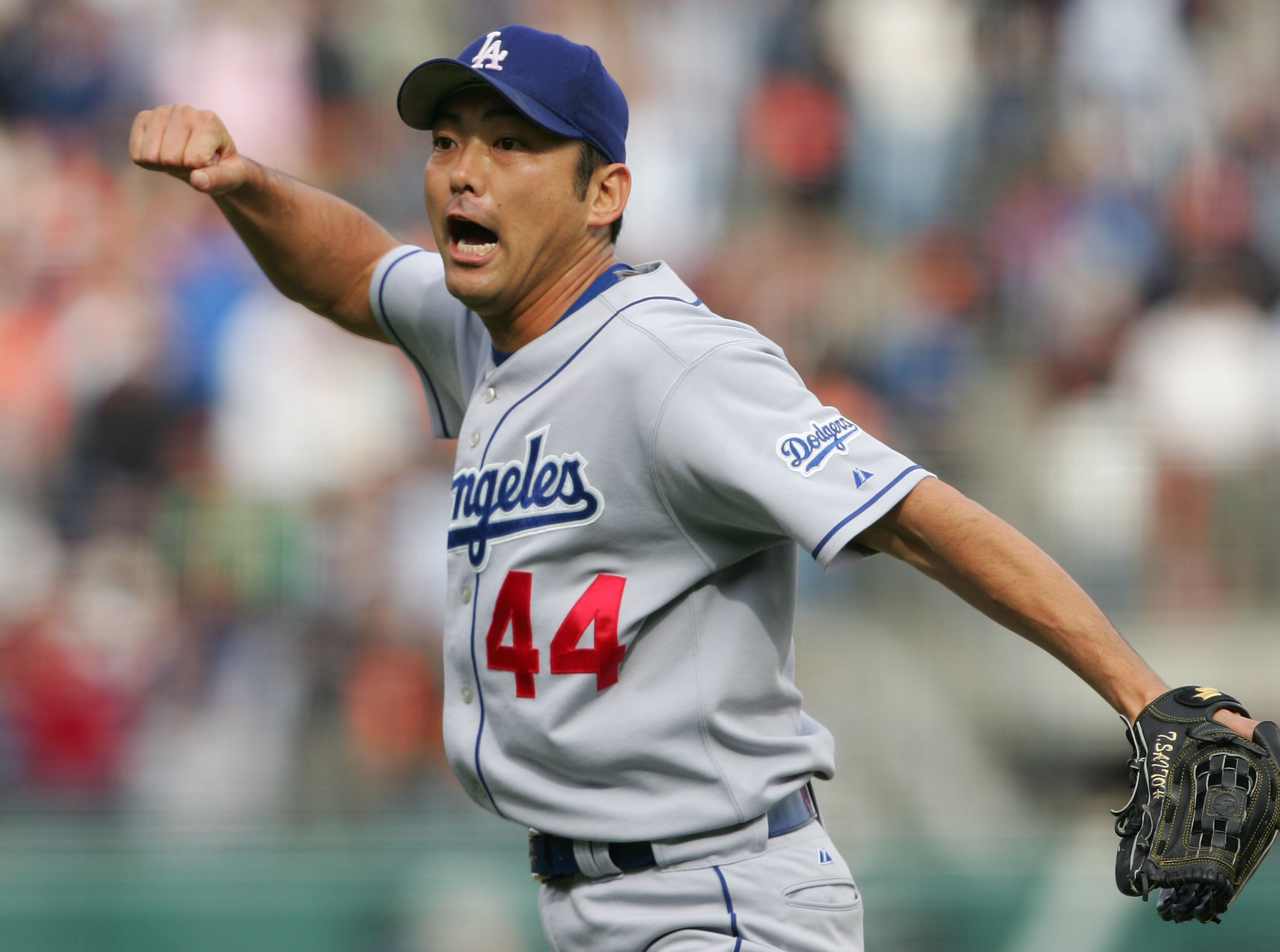 Saito was a relatively unheralded addition to the 2006 Dodgers, signed to a minor league deal. The 36-year-old was ultimately put in the unenviable position of having to follow Eric Gagne as Dodgers closer (with a brief "Ghame Over" tryst with Yhency Brazoban in between in 2005 when Gagne was hurt), but Saito came through with flying colors.

The Dodgers signed Kuroda to a three-year contract before the 2008 season, and he proved to be a durable rock in the rotation in his four years in Los Angeles. He put up a 3.45 ERA, a 113 ERA+ in 115 games, including 114 starts with the Dodgers, with 523 strikeouts and 135 unintentional walks in 699 innings. Thanks to poor run support, Kuroda was 41-46 with the Dodgers.

He pitched three more seasons in the majors with the Yankees, and despite not joining the majors until turning 33 Kuroda averaged 30 starts, 188 innings and 141 strikeouts in his seven MLB seasons. He ranks second to Nomo among major league starters born in Japan in wins (79), starts (211) and innings (1,319).