How the Dodgers might trade for competitive balance draft picks

The Dodgers could have as many as four of the first 36 selections in the 2016 MLB Draft, and five of the first 65 or so picks depending on where and when the last few free agents who declined qualifying offers sign. But there is potential to add even more, thanks to competitive balance picks.

There are 12 total competitive balance picks, split into rounds of six picks each, with Round A after the first round and all free agent compensatory picks, and Round B after the second round. The competitive balance picks were added in 2013, with the picks awarded by lottery among the teams with the 10 lowest revenues and the 10 smallest markets.

The most important aspect of these picks is that they are the only draft picks that can be traded, and each pick can only be traded once.

The Dodgers acquired such a pick in 2015, trading minor leaguers Ben Rowen and Chris O`Brien to the Orioles in exchange for minor league catcher Brian Ward, pitcher Ryan Webb and 2015 competitive balance Round B pick, No. 74 overall.

The Dodgers used that pick to draft pitcher Josh Sborz out of the University of Virginia.

With all due respect to the three minor league players in the trade, that deal essentially boiled down to the Dodgers taking Webb's salary (just shy of $2.75 million at the time) for the right to the No. 74 pick.

Baltimore had already designated Webb for assignment just days before the trade, so the cash-rich Dodgers swooped in to absorb a salary for which the Orioles would have otherwise been on the hook, with the draft pick serving as a handling fee of sorts.

Not every team values draft picks the same way, and different teams at various stages of the competitive spectrum that might make them more or less willing to shed salaries or give up picks. But let's look at the current holders of 2016 competitive balance draft picks, and potential trades the Dodgers could pursue if they so choose.

Keep in mind that these trades, while pure speculation, don't necessarily mean the Dodgers would need to find room for any player(s) they acquire. After all, the club acquired Webb without an immediate place for him on the roster, and allowed him to pursue another opportunity once it arose, releasing him so he could sign with Cleveland. This is more about buying a pick, but if they happen to find a player they also have use for, all the better.

Note: these picks are where they currently stand, with four free agents with qualifying offers still unsigned (Ian Desmond, Dexter Fowler, Yovani Gallardo, Howie Kendrick) that may affect these. Also, the Dodgers will slot in at No. 36 no matter what for failure to sign 2015 No. 35 overall pick Kyle Funkhouser, and the Twins will pick No. 74 in 2016 after failing to sign No. 73 pick Kyle Cody last season.

Competitive Balance Round A

Cincinnati is in full rebuild mode, and have just five players making over $3.5 million in 2016. The club nearly dealt second baseman Brandon Phillips (two years, $27 million remaining) to Washington but that fell through, thanks in part to Phillips' no-trade clause. Homer Bailey somehow has $86 million guaranteed left on his deal over the next four years, including the buyout of his 2020 option, making his one of the most onerous contracts in the sport.

Another potential option might be Zack Cozart, who is due $2.925 million in his age-30 season. Cozart missed the last two-thirds of 2015 with a knee injury and youngster Eugenio Suarez took over at shortstop, though Cozart is the better defender. With the trade of Todd Frazier, Suarez will reportedly play third base per team president Walt Jocketty, according to C. Trent Rosecrans of the CIncinnati Inquirer. That opens up shortstop for Cozart, but with Phillips still around Cincinnati might also want to find a place for newcomer Jose Peraza to play.

Coco Crisp is the obvious call here, now 36 and with one year and $11 million remaining on his contract, plus a $750,000 buyout of his $13 million vesting option for 2017. Crisp's option will vest with 130 games played or 550 plate appearances in 2016, but that doesn't seem likely to happen with Crisp behind Mark Canha, Billy Burns and Josh Reddick on the outfield depth chart.

Billy Butler turns 30 in April and has two years, $20 million left on his contract with Oakland, and has hit just .261/.323/.385 with 24 total home runs over the last two full seasons. But even though both could be traded, the salaries of Crisp and Butler aren't exactly killing the A's.

Boone Logan has $6.25 million and one year remaining on his three-year deal. He put up a 4.33 ERA in 60 games in 2015 but wasn't necessarily bad. He had a 3.62 FIP and struck out 23.7 percent of his batters faced, and the southpaw held left-handed batters to hitting just .229/.349/.254. Colorado also has Christian Friedrich in the bullpen, but the other four left-handed pitchers on the 40-man roster are all starters.

Another possibility is shortstop Jose Reyes, who has $48 million guaranteed left on his contract over two years, including the $4 million buyout of his 2018 option. The toxicity of his pending domestic violence case and possible MLB suspension clouds his value, but also could grease the wheels on his exodus from Denver.

No team is as difficult to figure regarding the draft than Arizona. On one hand, they left $1.7 million in bonus pool money on the table in their 2015 draft, per Zach Buchanan of the Arizona Republic. They also traded top-100 prospect and 2014 first-round pick Touki Toussaint to the Braves earlier in 2015 to get out of the roughly $9.5 million remaining of Bronson Arroyo's salary.

This winter the D-backs have been linked to former Dodgers second baseman Howie Kendrick, but general manager Dave Stewart has said publicly in January that he doesn't want to give up another draft pick to sign a free agent after already forfeiting their first-round pick to sign Zack Greinke.

But perhaps clearing infielder Aaron Hill and his $12 million salary in 2016 might be enough of an incentive, especially after the soon-to-be 34-year-old hit just .238/.290/.359 in the last two seasons combined. 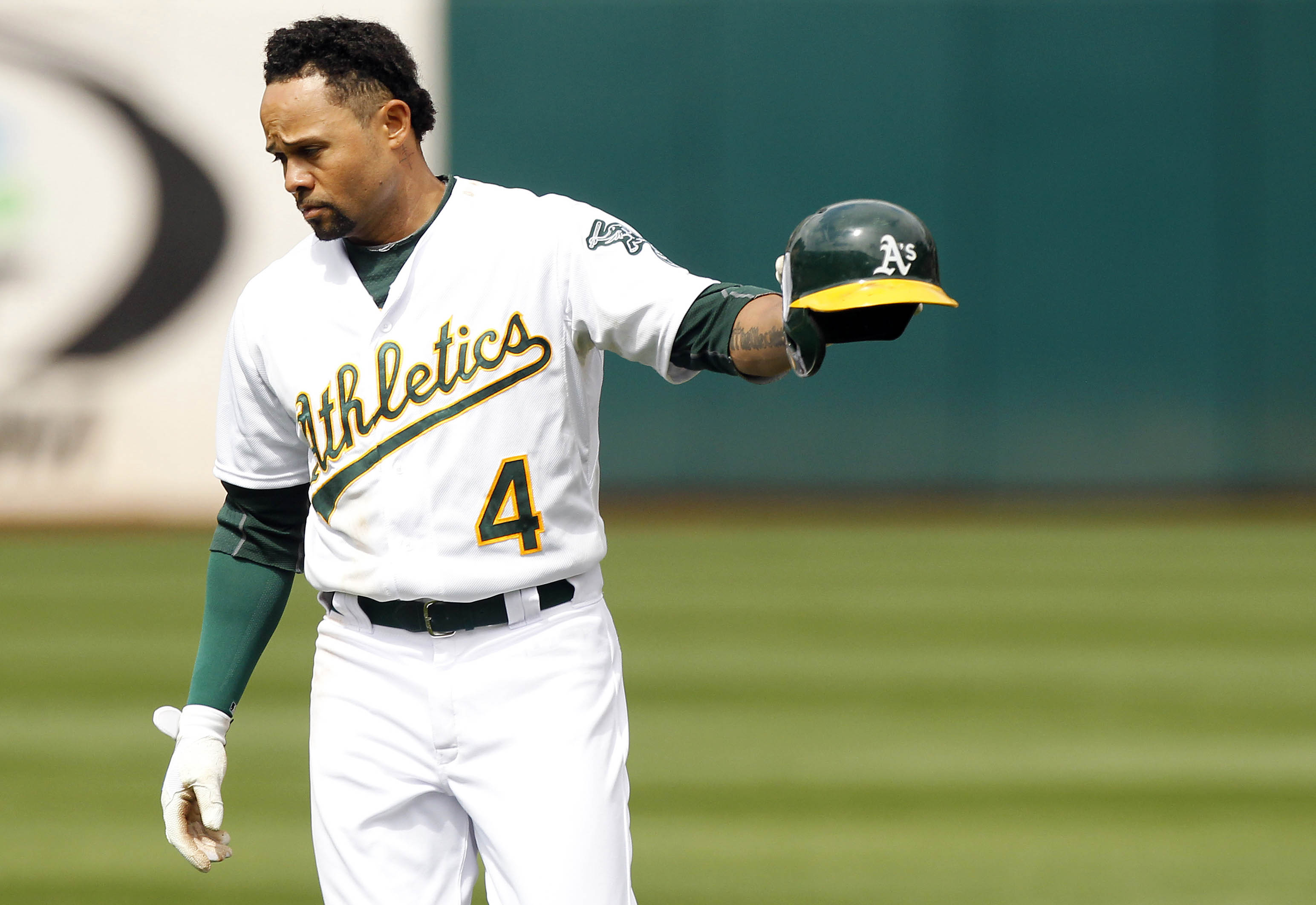 Coco Crisp has one year left on his contract and could be the odd man out in the Oakland outfield (Photo: Cary Edmondson | USA Today Sports)

Atlanta acquired this pick from Miami in the three-team deal with the Dodgers on July 30, 2015. That pick cannot be traded again.

Pittsburgh doesn't seem to have much dead weight on its roster, unless they are dying to unload Michael Morse, who is due $8 million remaining in 2016. But the Dodgers already used Morse as currency in a trade, taking on his salary as part of the aforementioned three-way deal with the Braves and Marlins last July 30. Pittsburgh is only really on the hook for about $4.75 million of Morse's salary anyway, because the Dodgers sent enough cash to Pittsburgh on July 31 to balance out the difference in salaries between Morse and Jose Tabata.

Dealing for Morse again might cause a rift in the time-space continuum.

Competitive Balance Round B

San Diego's big-ticket items — Matt Kemp (four years, $72 million) and James Shields (three years, $65 million including 2019 option buyout) — are both players the Padres need to succeed and aren't sunk costs that the team would be looking to just dump.

Cleveland is about as clutter-free as can be with their payroll, with their main contributors either locked up or on completely manageable one-year deals. The best hope at securing this pick from Cleveland seems through some larger transaction, or if somehow the club sours on reliever Bryan Shaw — a Webbian $2.75 million in 2016, plus one more year of arbitration in 2017 — and wants to dump him.

In other words, don't hold your breath.

Minnesota might not be a fit unless they need to shed salary, which could come in the form of relief pitcher Kevin Jepsen ($5.31 million) or third baseman Trevor Plouffe (he filed at $7.95 million, Twins filed at $7 million; plus one more season of salary arbitration in 2017), with the latter possibly only happening if moving slugger Miguel Sano to the outfield doesn't work out as planned.

There aren't too many big salary obligations for Milwaukee, with pretty much their entire long-term commitments wrapped up in Ryan Braun (five years, $100 million, including a $4 million buyout of his 2021 option) and Matt Garza (two years, $25 million). There doesn't seem to be an obvious fit here, unless part of a larger deal.

Baltimore actively pursued Mark Trumbo ($9.15 millon) this offseason, so it's unlikely they would sour on him within the first two months of 2016. Should the 32-year-old Miguel Gonzalez repeat the form that put up a 4.91 ERA and 5.01 FIP in 26 starts in 2015, he and his $5.1 million salary could be on the outside looking in, especially if the Orioles add another free agent starter this offseason.

The Rays don't have a lot of fluff on their payroll, and the players rumored to be on the market -- Jake McGee, Brad Boxberger -- will fetch more of a heavy player return than a salary dump. To get this draft pick might come down if one of James Loney ($8 million) or Logan Morrison ($4.2 million) proves redundant in their final year before free agency. Hard to see a fit here.

Keep in mind, these are all my speculation. For trades to come together takes a ton or work on its own, and that's before thinking about dealing one of these competitive balance picks. But if you see one of these teams tire of one of the players mentioned above, or some other relatively expensive unproductive player, possibly resulting in a designation for assignment, that could set the wheels in motion for a potential draft pick trade, with the Dodgers paying the freight.

Thanks to great resources Baseball-Reference and Cot's Baseball Contracts for making this research much easier.