Hall of Fame call could come for Mike Piazza

Share All sharing options for: Hall of Fame call could come for Mike Piazza

Later on Wednesday, catcher Mike Piazza might be get the ultimate call, and if the National Baseball Hall of Fame does in fact bring the good news it will mark the second straight year Cooperstown will induct a Dodgers player that got away.

But unlike Pedro Martinez, the 2015 inductee who was traded away after just one season in the bullpen in Los Angeles, Piazza made his bones as a Dodger even in his relatively short tenure with the franchise.

Piazza was a force of nature at the plate, a hitting savant whose swing was honed in his backyard batting cage in Pennsylvania. His power was majestic, especially to the opposite field, and had to be seen to be believed.

Drafted in the 62nd round in 1988 as a favor to Tommy Lasorda, who was Piazza's godfather — they were both from Norristown, Pa. — Piazza made his major league debut in September 1992, then grabbed a hold of the starting catching job in spring training 1993 and never let go.

He hit from the start, never hitting below .318 in any of his five full years with the Dodgers. His worst OPS+ in Los Angeles in any season was 140, in the strike-shortened 1994 season. Since Piazza left in 1998, the franchise has only had nine individual seasons with a 140 or higher OPS+.

Again, Piazza did it in each of his first five years.

But OPS+ wasn't exactly on my radar in 1993. Fortunately, Piazza excelled at all the traditional stats, too.

My first full year of watching baseball was in 1985, at age nine, and the Dodgers had ready-made stars to root for in Guerrero and Fernando Valenzuela. Orel Hershiser soon took that baton and ran with it all the way to a World Series title in 1988.

My favorite player of all-time is Eddie Murray, thanks largely to his three years as a Dodger (1989-91) when I was ages 13-15, but he was a well-established star with a pedigree from another team, the Orioles.

So when Piazza took baseball by storm in 1993, he was really the first opportunity I had to get in on the ground floor with a new favorite Dodger, someone to follow from the very beginning.

Those first five years were legendary, including back-to-back second-place finishes in MVP voting in 1996 and 1997. He hit .362 with 40 home runs in 1997, simply unheard of. He won Rookie of the Year, won five straight Silver Slugger Awards and made five straight All-Star teams, including four starts at catcher.

He averaged 33 home runs and 105 RBI in those first five years, all the more impressive when considering that both the 1994 and 1995 seasons were shortened by the strike. 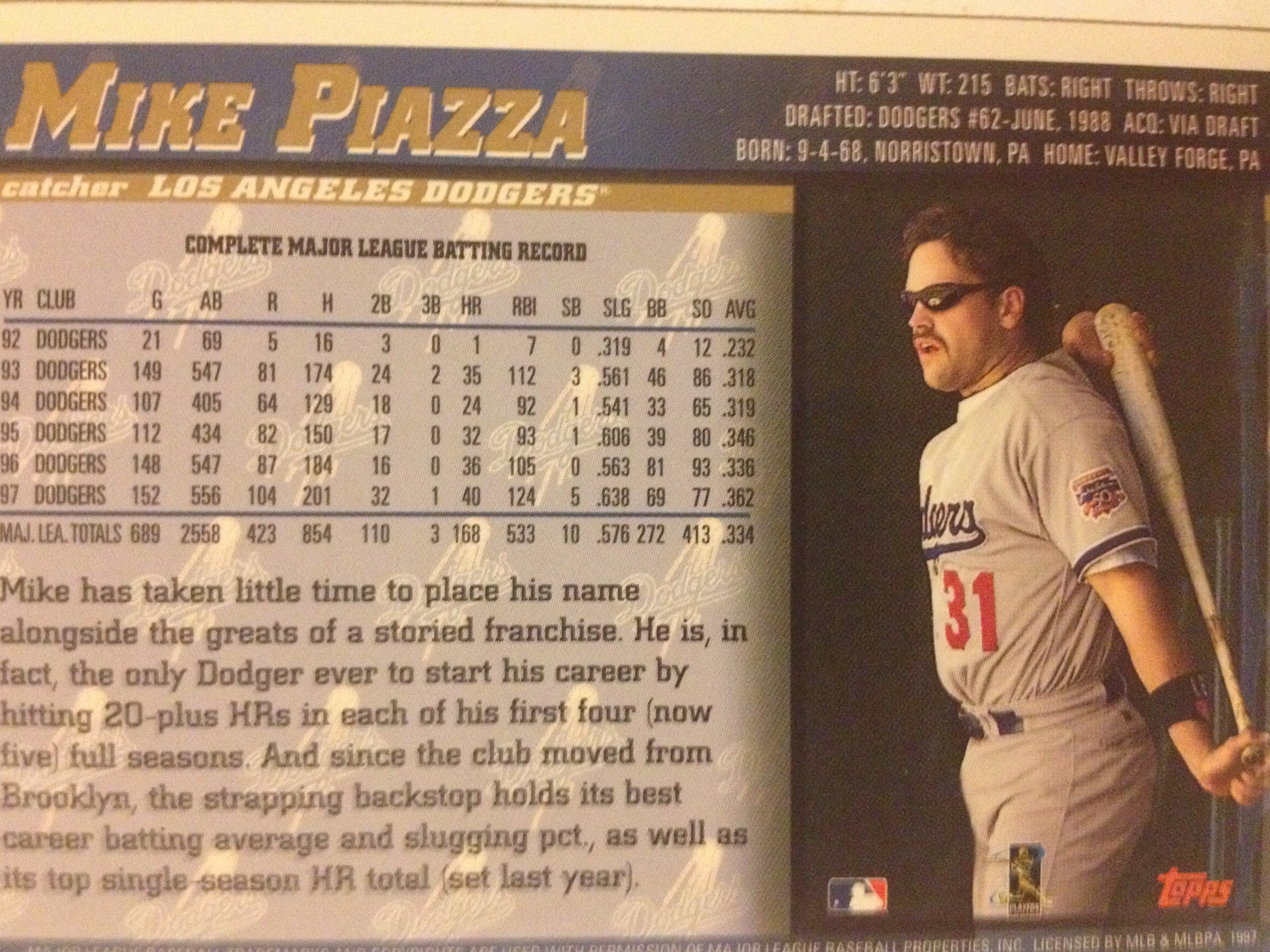 Piazza's 1998 Topps card tells the story of his five full seasons as a Dodger.

Piazza was a true star for the Dodgers, and a homegrown one at that.

But he was also going to be a free agent after 1998, and under new ownership with Fox, the Dodgers couldn't come to a contract extension with Piazza early in the season. So Piazza was traded, shipped to the Marlins in May. In a baseball sense, the Dodgers did reasonably well in the trade, getting a truly great hitter in Gary Sheffield in return, and a solid starting catcher in Charles Johnson, too, one with a defensive reputation.

See? The trade probably made baseball sense, but fandom is rarely rational, which is why the Piazza trade will forever hurt.

Getting into the Hall of Fame should get Piazza's number 31 retired by the Dodgers, which would bring the catcher back to Dodger Stadium, something that hasn't happened in any formal capacity since his playing career ended in 2007. It can be the first step in mending whatever fences have been damaged since his departure.

This is Piazza's fourth season on the ballot, and he received 69.9 percent of the vote last year, 28 votes shy of the 75 percent needed for induction to Cooperstown. So far this year Piazza has gained at least 11 votes over last year, per publicly-available ballots tracked by Ryan Thibodoux, appearing on 86.1 percent of 173 ballots through Tuesday night, well under half of the final expected total.

Should Piazza get the call from the Baseball Writers Association of America later on Wednesday — the 2016 inductees, which will include Ken Griffey Jr., will be announced on MLB Network at 3 p.m. PT — it will still be a moment of celebration for the Dodgers and their fans.

But it won't be as sweet as it could have been.