Share All sharing options for: Communication, delegation the key for Dave Roberts

PHOENIX -- Through the first week or so of camp, the only thing Dave Roberts might need to worry about is consuming too much caffeine.

His daily one-on-one meetings with each individual player in camp — there are 62 in all, with the 63rd (Yaisel Sierra) arriving this week — are labeled "Coffee with Doc," and are designed to discuss plans and expectations of the upcoming season.

Perhaps fueled by all that coffee, Roberts' spirit is apparent, whether it's addressing the team in the clubhouse, leading workouts, or meeting with reporters.

"He's extremely energetic and passionate. He always has a positive attitude, which is something you want in a manager. He's that way every day," pitcher Brett Anderson said, his coffee with Doc already finished. "He's an open book, and he tells you what he expects of you going forward. It's always nice to have that open line of communication going forward."

Communication is a strength of Roberts, something he learned in 10 major league seasons as a player.

"As a player you want to know where you stand. I believe in communication and that's the start of it," Roberts explained. "This just kind of lays the foundation for down the road."

Roberts' reputation further developed in his six years in San Diego, first as a special assistant in the front office for year, followed by five years on the Padres' major league coaching staff, including the last three years as bench coach.

"People from all around the league reached out, and universally it was 'You guys got one of the best.' I haven't heard a person who has a single bad word to say, which is somewhat rare," Dodgers pitcher Brandon McCarthy said. "I think everybody is very excited that he's on board."

Dodgers president of baseball operations Andrew Friedman likened Roberts' communication skills to those of Joe Maddon, who went to the playoffs four times in nine seasons with Friedman in Tampa Bay then took the Cubs to the NLCS in 2015. Maddon was Friedman's first managerial hire (in 2006), Roberts his second. 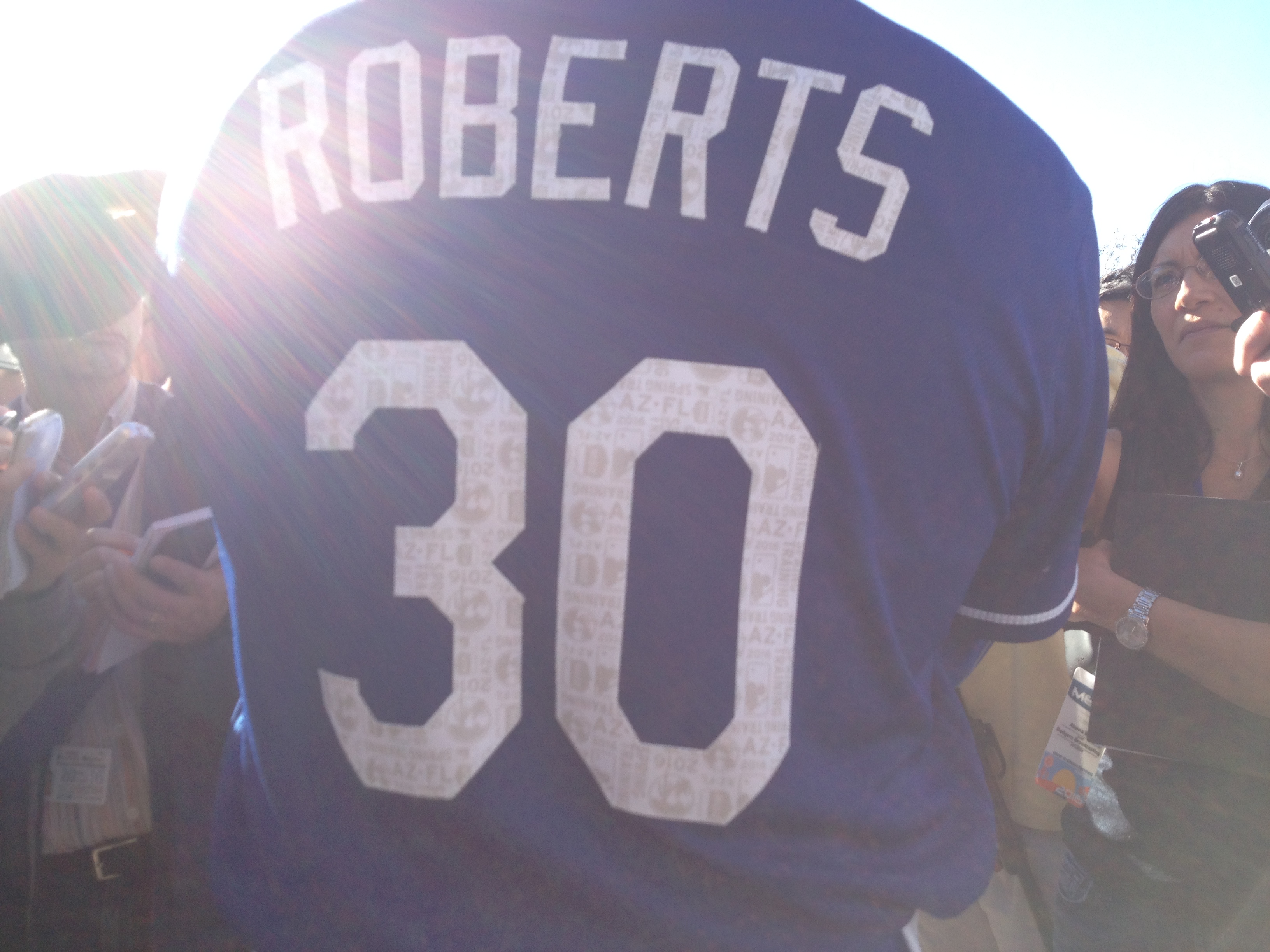 "It really helps slow the game down some. It really helps that guys appreciate that honesty and communication. I've already witnessed Doc do it all winter. I think that will help a lot," Friedman said. "Just talking to guys who loved the honesty and getting a feel for Dave and his thoughts."

Adrian Gonzalez was a teammate of Roberts in 2006 with the Padres, Gonzalez's first full major league season. He drove in Roberts six times.

"Obviously he's going to be a great field manager, a clubhouse leader, just a great person to have leading us," Gonzalez said.

But that communication doesn't just extend to players. The coaching staff, which includes seven new members behind the first-year manager.

"I think the biggest challenge from the people that I have kind of sought advice or counseling or however you want to put it is being able to not micromanage. When you have people around you that you trust, you have to let them do their jobs," Roberts said. "I think that in any leadership position, newly, you feel like you have to do it your way and you want to have your hands on anything. Me, by nature, I don’t like to micromanage and I like to empower people. So I’m definitely cognizant of that all the time."

"It's appreciating the depth of responsibility. It's relentless. It comes from all angles at all times. It's non-stop. -Andrew Friedman on the biggest challenge for a first-time manager.

Roberts said once he was hired in December as Dodgers manager, he sought out the advice of some friends within the game, including Indians manager Terry Francona, who managed Roberts in Boston; Bud Black, under whom Roberts worked as a coach in San Diego; Blue Jays president Mark Shapiro, his general manager in Cleveland; plus a few leaders in other sports, including Seahawks coach Pete Carroll and Warriors coach Steve Kerr.

"I just try to take as much as I can and make it my own," Roberts said.

The Dodgers expect Roberts' style to translate well during games.

"There are a lot of really talented people in the dugout and Dave's mind works really, really well," Friedman said.

Roberts is open to ideas as well. For instance, he's on board with defensive shifting.

"It's a part of our game right now. It's real. Whether it be the numbers or data of where the ball will end up if it's hit on the ground, combined with the psyche of the hitter, those are real components," Roberts said. "I think that every hitter, until they show they can beat the shift or manipulate the bat, it makes sense."

Even though this his first year as a manager, Roberts said he didn't feel any extra pressure, and relished the idea of taking over a three-time-defending division champion.

"There is a goal that we have as an organization, the media, the fans and an expectation which we all get. But I think that just to focus on the day-to-day, not to get too far ahead of ourselves," Roberts said. "And that’s something that as a player, a coach that I really understood and how to grasp on and it kind of alleviates the other anxieties or stresses or pressure. That’s something that we will reiterate to the players as well.