Share All sharing options for: Your spring training viewing guide

PHOENIX -- We get real, live baseball beginning on Thursday afternoon with the Dodgers hosting the White Sox in their Cactus League opener at Camelback Ranch. Teams competing against others wearing different uniforms will be a welcome sight after two weeks of workouts, practices and simulated activities.

While it is glorious to be able to watch Dodgers baseball after nearly five months without, it is also important to view these March games with the proper context, with a team getting ready for games that actually count, and are still a month away.

With that in mind, here are tips and tricks to watch spring training baseball.

Especially in the early going, don't try to draw any grand conclusions from the daily starting lineups. For one thing, the regulars will probably only get two, maybe three plate appearances, and play four or five innings. But most of them will be staggered to start off, some even starting every other day.

For instance, Adrian Gonzalez isn't expected to start on Thursday. His neck is fine, but he'll get his first start on Friday.

"With spring training, it's not as far as reading too much into where I hit guys in the order. A lot of it has to do with getting a certain amount of innings defensively and getting veteran players in and off the field," manager Dave Robert said. "As we get closer to the season, it's going to look a lot more like the regular season, but in these first few weeks of spring training where a guy hits in the order really has no bearing."

As spring training wears on, the regulars will play more often and we will probably have a better idea of what April might look like from a batting order perspective. But until then, just take these with a grain of salt.

Don't pay too much attention to spring stats

It happens every year. Someone will hit .517 during Cactus League play and folks will wonder why he won't make the team out of camp.

Or a veteran might hit .222/.254/.365 with two home runs in 67 plate appearances during the spring, only to start the season with a home run in each of the first three games of the year, with a record five total home runs in the opening three-game series.

There are so many varying levels of competition and intentions during spring training that it is nearly impossible to discern much just by looking at stats. Someone might be taking advantage of a series of pitchers up from the minor league side who, as the old adage goes, will be bagging groceries by next week. Although that never happens, literally nor probably even figuratively.

Sure, I'm sure I will still present stats, perhaps too many. Just know to receive them in context and don't make a big deal out of them, is all.

Unless the stat supports your belief or argument. In that case, fire away.

The first player was Brian Barden in 2013, by the way, and the second player was Gonzalez last year.

A common question I get quite often on Twitter during spring training is some version of "Why did they pull Clayton Kershaw after just 17 pitches?"

Most often in those cases, Kershaw or whoever didn't throw 17 pitches. It's just that Gameday didn't track them all. Take a look at the ninth inning from Wednesday between the Tigers and Pirates. 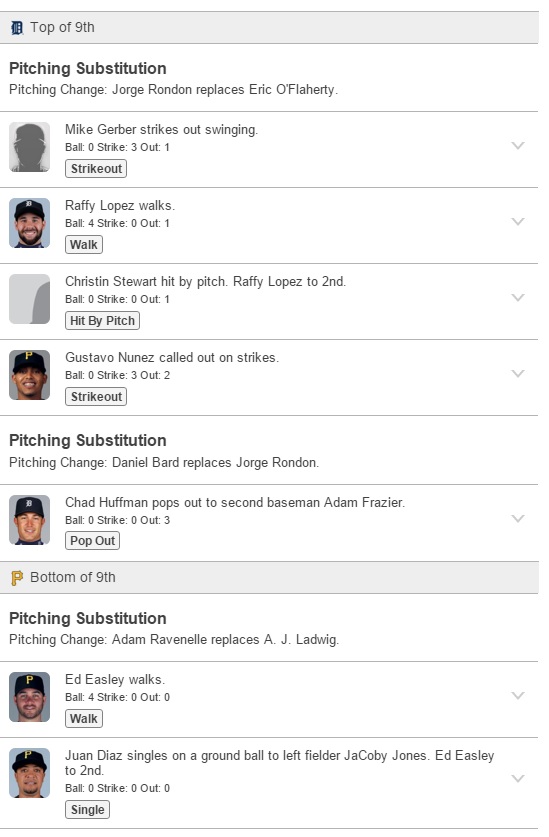 If you will notice, every single walk is four pitches, every single strikeout is three pitches, and every other outcome is one pitch. That does not reflect reality.

The fact is, most spring ballparks aren't equipped to even track the pitches for Gameday. If I remember correctly, the only parks in the Cactus League that track pitches are Peoria, Surprise, Salt River Fields and the Cubs' new park in Mesa.

The Dodgers will televise only 13 games from Arizona on their own network, SportsNet LA, and there are a few games on the radio schedule that don't overlap.

But there are also two Angels-Dodgers games that will be televised in Los Angeles, but the Angels broadcast.

If you happen to subscribe to MLB.tv, there are no blackouts during spring training. There might be a few other games that manage to be available online. Bookmark this MLB.tv schedule page and check it daily to see if any additional Dodgers games might be available to you.