With the prospect countdown in the books, and opening day quickly approaching, it’s time to take a second try at ranking the Dodgers’ top trade chips entering the 2016 season. Through the 2015 season and off-season, the Dodgers traded the third, fifth, seventh, 12th, 17th, 20th, and 21st-ranked trade chip from my inaugural trade value rankings. Some of these players lost considerable value off their preseason ranking before being dealt, while the Dodgers elected to retain their most internally valuable prospects.

For this year’s rankings, I limited the list to just the top 21 players from the overall prospect list (the number will make sense at the end). I followed the same guidelines from 2015 when making this year’s list, so here is my explanation of the variables that I wrote last season.

Overall Talent: This is self explanatory. Essentially each player started in their ranking I gave them in the Top Prospect Prospect List.

Future Value to Trading Club: This is essentially the same thing as the above factor, but additional weighting was given to players closer to providing value to the major league team. If a trading club is parting with a valuable major league piece, they may want a more immediate return on their investment.

Present Value to Parent Club: The closer to filling a need for the current team, the less incentive the team has to trade the player. As you’ll read below, some players are too high up the organizational depth chart that trading the player might create a decent enough hole behind them to make any trade a wash or even a loss.

Organizational Depth Chart: Similar to present value, but speaks to primarily how replaceable a player might be. If a prospect has several major league names to leapfrog to reach the Dodgers, they might be of less present value than a player with few alternatives or a placeholder in front of them.

Distance from the Majors: Like the depth chart, but time to mature factors into trading players as well. A player may have a high ceiling but could be three years away, giving the Dodgers both time to replace the player’s potential, but likewise time for the player to lose luster, struggle to develop, or fall short of his ultimate upside. Until recently, you rarely saw teams trade for players below A ball.

Lastly, this is a reminder that this list is completely arbitrary and primarily a discussion starter.

20. Mitch Hansen: Hansen is years away from the majors and performed poorly in his debut. He would be too great a risk for any acquiring team to justify moving a considerable asset for him.

19. Jose De Leon: Would be much higher on this list if the competition was less fierce for the bottom spots in the rotation. Would be of value in a blockbuster, but could be hard to create same value he could provide as soon as this June for the Dodgers.

18. Julio Urias: You could make the case that he should be ranked higher if you could pull a player like Chris Sale, but his uniqueness makes him extremely hard to move. A year away. 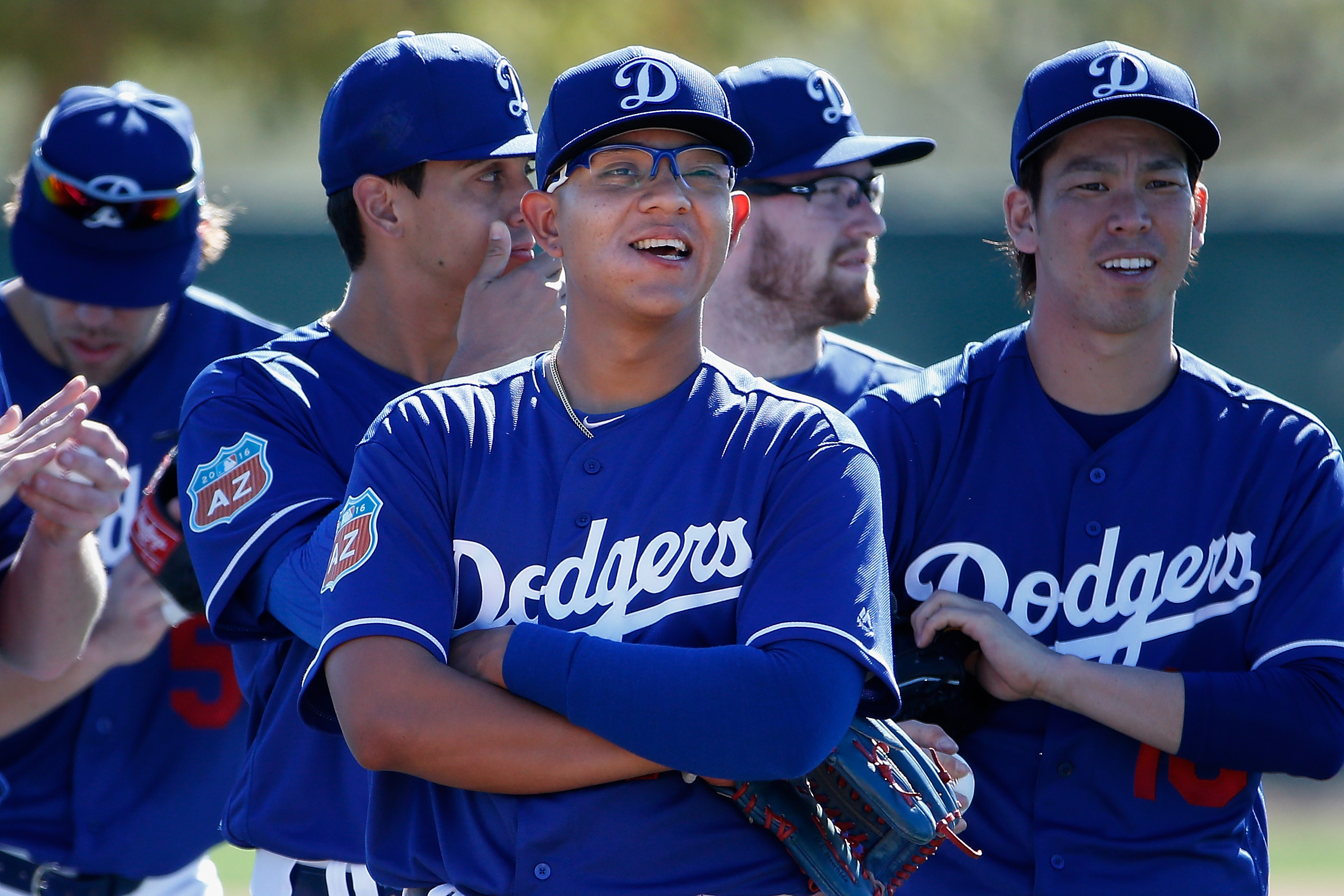 17. Chris Anderson: Talented, but needs to rehab his image. Worth more to the Dodgers to try to fix, likely in the pen, than would he could bring in trade at the moment.

16. Cody Bellinger: He either ranks near the top of this list or near the bottom depending on how you value his future outlook. He’s technically "blocked" but his upside arrow is pointing way up and it’s likely worth holding on to him to see how much more he’s likely to improve.

15. Brendon Davis: Talented and likely further in his development than Hansen, so could entice teams that heavily scout the short season leagues, but Davis is many years away from the majors and will require teams to be patient for a return on their trade.

14. Willie Calhoun: Is he already overrated (by people like me) or still under the radar and looking to break out this year? Calhoun could have immense value to the right team, but Dodgers will need to make a quick assessment on his future value to part with him. Big gamble, because his upside could exceed a potential return.

13. Zach Lee: Lee’s value is in trade limbo for several reasons. He’s fairly fungible as a back end prospect, but he might break camp as the fifth starter. If the rotation was healthier, his name might be higher, but not so much higher as his ceiling is relatively low.

12. Ross Stripling: One slot ahead of Lee because he’s slot or two below on the depth chart. Value could jump for Dodgers if he moves to the pen and succeeds, but he could be a nice complementary piece in a larger trade.

11. Trayce Thompson: His value is roughly the same as what he showed in the Todd Frazier deal, as an MLB-ready complementary piece. At a micro level, Thompson is presently more valuable to the Dodgers with many outfielders dealing with injuries presently in camp.

10. Micah Johnson: More fungible than Thompson, Johnson is blocked at second and may not even fit best at the position. His primary value is that of a late season call-up/designated runner for Dodgers, but a rebuilding team might want to chance his athletic upside in an everyday role.

9. Josh Sborz: There’s a sizable gap, in my opinion, between Johnson and Sborz, as the value of the following prospects can carry deals on their own for mid-range talent or better. Sborz has moved very quickly and could provide quick ROI. Road to Dodgers gets bumpier for Sborz past Double-A, with a crowded prospect laden Triple-A rotation.

8. Kyle Farmer: Fourth in the organizational catching depth chart with each player already ready for the major leagues. Farmer has enough hitting talent to grab a starting role for a lower tier team and could provide almost immediate return for a GM looking to rebuild on the fly.

7. Yadier Alvarez: Highly talented, seemingly far from the majors, at a position of great depth in the organization. Dodgers have a steeper financial investment in Alvarez compared to the rest of this list, but that shouldn’t weigh significantly in trade discussions. Dodgers almost relish in their ability to buy assets and flip them for ready talent.

6. Walker Buehler: His value will will increase the closer he gets to returning to the mound. Has similar value to injured or "recently recovered at the time of trade" prospects Max Fried and Jeff Hoffman. Still, might not be for every team, as you have to weigh risk of potential diminished value post-surgery.

5. Frankie Montas: Might be higher if he wasn’t injured himself, might be lower if team plans to insert him the bullpen and cut him loose upon returning. He was the centerpiece of a blockbuster trade for an All Star this off-season, hard to see his trade value being much different by the deadline this year.

4. Jharel Cotton: I’m under consensus on Cotton, so I see a gap between his perceived value and his actual value. If the consensus valuation is as high for trading teams as it is for media prospect prognosticators, then Cotton might have the most trade equity on this list.

3. Austin Barnes: Weird to rank catcher with this much present value so high, but the Dodgers have him third on their positional depth chart, will be blocked from starting so long as Grandal is healthy, and the fourth catcher on the depth chart, Farmer, is no slouch with the bat either. It would hurt to part with Barnes, but the Dodgers could mitigate most of the loss with existing players on the roster.

2. Alex Verdugo: Might as well be ranked 1A instead of two, but Verdugo is the most valuable offensive commodity in the system. He would be highly coveted by trading teams and his path to the majors isn’t clear at the moment. It always hurts to lose players of this caliber in trade, but Verdugo is one of two players realistically capable of headlining a blockbuster deal.

1. Grant Holmes: The crown jewel of trade value in the organization for the second year running, Holmes is still years away from being major league ready, but has ample amounts of name cache and physical talent to satisfy any general manager on the other end of a blockbuster trade. Holmes trumps Verdugo for the top of the list because of the depth of quality starting pitchers in the system capable of absorbing his loss.

NR. Corey Seager: If you read my profile on Seager, I suggested that he could be one of the five best players in the National League over the next half decade. It’s almost impossible to get back comparable talent in a Seager trade, you could count the possible acceptable but unrealistic scenarios on one hand. Seager present value to the Dodgers’ 2016 season makes him virtually untradable.