Louis Coleman has made most of opportunity with Dodgers

Share All sharing options for: Louis Coleman has made most of opportunity with Dodgers

PHOENIX -- Louis Coleman was a relatively unheralded signing by the Dodgers in February, but one who has made an impact during spring training and figures to be a part of the Dodgers bullpen on opening day in Sn Diego. Just two months ago, neither he nor the team thought this would happen.

Coleman was already signed for 2016, avoiding salary arbitration with the Royals with a one-year, $725,000 contract. He was with the team that drafted him in the fifth round in 2009 out of LSU, and the team for whom he pitched in parts of each of the last five major league seasons.

But then the Royals released him on Feb. 3.

"I have a lot of friends in Kansas City and I love the front office guys. The organization itself is great," Coleman said. "I was upset when I got let go because I wanted to be with them forever. I wanted to be the middle reliever Derek Jeter that stayed with them for 20 years. That's how much I loved and valued those guys."

The Dodgers swooped in and signed the right-hander on Feb. 19, the day pitchers and catchers reported to Camelback Ranch. Coleman signed a major league deal for the same $725,000 he was going to get with the Royals (Coleman, by getting released, also received an additional 30 days of termination pay from Kansas City, roughly $118,852), but then again so did Dustin McGowan in 2015, and that didn't guarantee him a spot on the roster.

Despite already committing $4 million to reliever Joe Blanton and the Dodgers bullpen already seemingly full, president of baseball operations Andrew Friedman insisted in February that the signing of Coleman was not just adding a warm body.

Coleman only pitched in four games and three innings for the Royals in 2015, but in 38 appearances with Triple-A Omaha put up a 1.69 ERA and 24.6-percent strikeout rate, the latter right in line with his 25.3-percent career major league strikeout rate.

Though his career numbers with the Royals are solid — a 3.20 ERA, more strikeouts than innings, 4.05 xFIP — in 2014 Coleman had a 5.56 ERA and 5.69 FIP in 34 innings. That year, which followed a 0.61 ERA and 2.04 FIP in 2013, Coleman broke the tip of his middle finger on the first day of practice, though the fracture wasn't noticed right away, with inflammation blocking the break on initial X-rays.

Coleman tried to pitch through the pain, and developed bad habits, which he said affected him all year, maybe until September.

"Even though my shoulder and everything felt good, I just didn't have the same action on my pitches," Coleman said.

So after one down year and one year mostly in the minors, how has Coleman found success so far this spring with the Dodgers? For one, he is healthy, which allows him to utilize his deceptive delivery, coming from the third-base side of the rubber. 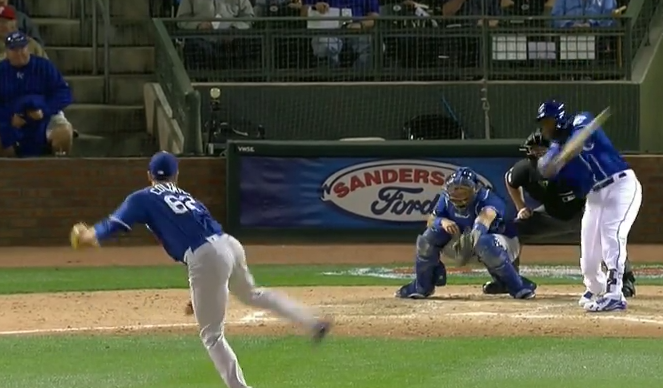 "It's a bad visual for the right-handed hitters, and even for the lefty, that angle where the ball comes in from. He's getting some swings and misses, he's missing barrels," manager Dave Roberts said. "His goal was to come in and open eyes and be productive, and that's what he's doing."

"For the right-handed hitter, it seems like it's from coming behind and he throws the breaking ball as well," Roberts explained. "But also from the lefty, you're not used to seeing the ball coming from third base."

That odd delivery goes back to his college days at LSU, when by the end of his sophomore season (2007) he had tried just about everything from straight over the top to side arm to submarine style. Before his junior year he wanted to go back to an over-the-top arm slot that ended up morphing into the style he has now, sort of a three-quarters arm slot with plenty of deception.

"When I asked to come back over the top, I wasn't pitching hardly at all, and they said, 'Do whatever you want. We're not worried about it'," Coleman recalled, laughing. "It's been a learning experience for me since 2008."

"The really cool thing about this organization is that from the day I walked in they were trying to learn my delivery and how I make it work just as much as I was. It's been a cool experience feeling like they care about me as much as I do."

So far for Coleman, the results have been great. Take spring training stats with as much of a grain of salt as needed, but no matter how you slice it Coleman has had a dominant March, with 10 strikeouts in his seven scoreless innings, with just three hits allowed and no walks.

"I'm just trying to get ahead, with strike one, then stay ahead. Not giving in to the hitter," Coleman said. "It's just my command is better, trying to put the hitter on the defensive, not in a count where he can tee off on me."

Kenley Jansen, Chris Hatcher, J.P. Howell and Blanton are locks for Dodgers bullpen spots, with Coleman competing with Yimi Garcia, Pedro Baez and Luis Avilan for those final three spots. The latter three have options while Coleman does not, and Coleman has been pitching far too well to pass through waivers at this point.

In other words, get used to the fact that Coleman will be in the Dodgers' bullpen to open the season.

April 4 will be a nice 30th birthday present for Coleman, who will likely make his first opening day roster. He sort of did in 2014 with Kansas City but opened the year on the disabled list with that broken finger, so he was in Arizona rehabbing instead of getting introduced and lining up along the foul line in Kansas City.

And he will have earned it, too.

"The way I look at it is every middle reliever has to win a job at some point, and why not do it with the Dodgers, a team that is already stacked up and ready to go," Coleman reasoned. "I have been part of the Royals, who have had the best bullpen the last three to four years, and I was able to crack it every now and then. If I can get into that one, I can get into a lot of bullpens."