The number four figured prominently for the Dodgers again last week, with four straight series wins giving them four wins in six games on the week — taking two out of three games on the road against both the Braves and Rockies.

That gave the Dodgers four wins for a third straight week, a 12-7 record and a 102-win pace, and a 2½-game lead in the National League West.

Dodger Batter of the Week: The top of the order fueled the fire this week for the Dodgers, and Adrian Gonzalez was there to clean things up with a 10-hit week, hitting two home runs while driving in seven. Gonzalez was also one of four Dodgers with at least five walks during the week, putting up a 1.231 OPS.

Honorable mention goes to Chase Utley, who hit .345 with four extra-base hits, scored the winning run Wednesday and drove in the winning run Sunday; and to Joc Pederson, who homered and had a .480 on-base percentage.

Dodger Pitcher of the Week: In his first start at Coors Field, Kenta Maeda kept his tremendous start going, pitching scoreless ball into the seventh inning his his third scoreless start in four MLB outings to date.

Honorable mention goes to Clayton Kershaw, who powered through eight innings with 10 strikeouts on Thursday, and to Kenley Jansen, who saved four games and struck out five, but also walked a batter, which disqualified him.*

*Not really, but it was his first walk of the season. 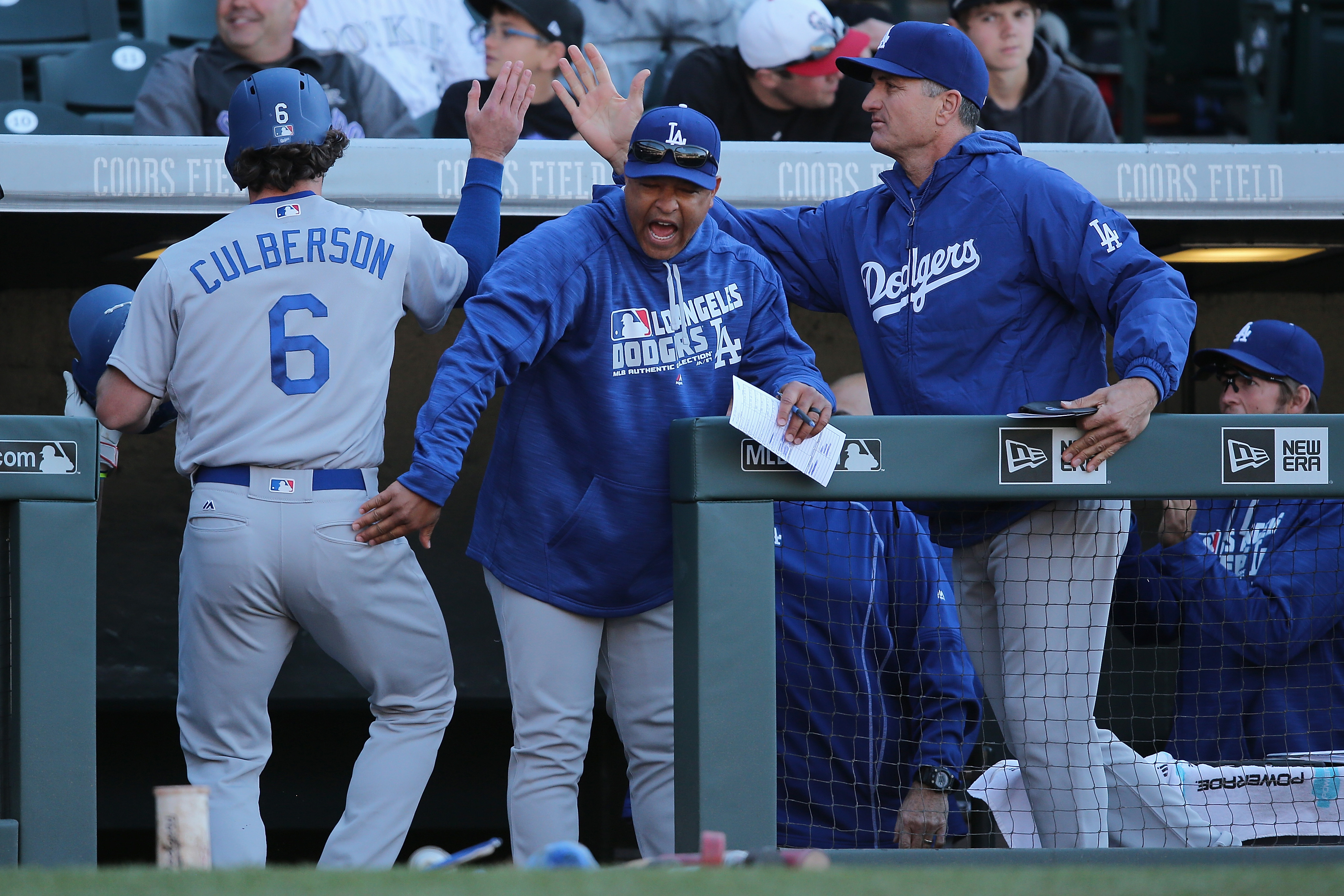 The game was won, then was lost, then won again, an infuriating and exhilarating contest that helped fuel the 'No lead is safe at Coors Field' fire. (Photo: Doug Pensinger | Getty Images)

Maeda mania: Kenta Maeda has had a better start than anyone could have possibly imagined to date. He has faced all four National League West opponents once in his four starts, and has allowed only a single run in total. Maeda is one of just three pitchers since 1900 to pitch at least 25 innings in his first four major league starts — he has 25⅓ — while allowing one run or fewer, per the Elias Sports Bureau.

Saving the day: Kenley Jansen on Saturday recorded his eighth save of the season, and the 150th his career. Jansen is just the 40th pitcher ever to record 150 saves with one team (more on that on Tuesday), and after another save on Sunday he stands just 10 behind Eric Gagne for the all-time Dodgers save record.

Jansen ranks seventh on the active save leaders list, and his 88.8-percent success rate ranks third among active pitchers, trailing only Craig Kimbrel (90.6 percent) and Aroldis Chapman (89.0 percent), with a minimum of 100 save attempts.

Third time is a charm: The Dodgers have won five of their six series to date this season, including winning the rubber game of a tied series in each of the last four efforts. Factor in the season-opening sweep of the Padres and their Apr. 9 win in San Francisco, the Dodgers are 6-0 in the third game of a series in 2016.

Relief heavy: With two extra-inning games in Atlanta and a weekend in the hitters haven in Denver, the Dodgers bullpen threw 22 innings during the week, an average of 3.67 innings per game, compared to 2.74 innings per game in the first two weeks of the season.

But the larger workload was spread out a little more, with the Dodgers carrying eight relievers all week, and nine total relievers pitching in at least one game.

Thursday: Relief pitcher Louis Coleman as placed on the bereavement list after the death of his grandfather, and reliever Luis Avilan was recalled from Triple-A Oklahoma City.

The Dodgers run the Quilvio Veras gauntlet, coming home to play the Marlins for four games then the Padres for three.