With the Miami Marlins in town for four games starting Monday night, in Don Mattingly we have the quite rare instance of a former Dodgers manager returning to face them after leaving.

Mattingly and the Marlins are off to a slow start, just 6-11 in his first year in Miami. Mattingly averaged 89 wins per season in his five years managing the Dodgers, and is the only manager in franchise history to reach the postseason in three consecutive years.

He is also just the sixth Dodgers manager in the last 100 years to face the team after leaving.

Part of that rarity is a byproduct of the Dodgers' incredible stability at the managerial position, with Walt Alston and Tommy Lasorda accounting for nearly 43 seasons on their way to the Hall of Fame. Neither one managed again after their two-decade stint with the Dodgers, so they never had a chance to face their old team.

The list of managers since is full of people who haven't managed since leaving LA, including Bill Russell, Glenn Hoffman, Grady Little and Joe Torre. Brooklyn managers before Alston to never lead a team again after the Dodgers include Wilbert Robinson, Max Carey, Burleigh Grimes, Clyde Sukeforth, Ray Blades and Burt Shotton.

That covers Dodgers managers dating back to 1914, save for these five, who later returned to face the team.

Stengel's first game back in Brooklyn came on May 14 in Ebbets Field, and this time the Dodgers got the better of the Braves, 10-2.

Durocher was suspended for the 1947 season for association with gamblers, and his return to the Dodgers in 1948 lasted only until July 11 after the returning pennant winners started 35-37. Just six days later, Durocher had another job, managing the rival Giants.

His first game against the Dodgers came quickly, on July 26 at Ebbets Field. Durocher had the last laugh, with a 13-4 win punctuated by home runs from Johnny Mize and Bobby Thomson.

Durocher's influence could be felt in 1948 on both sides of the Dodgers-Giants rivalry. While managing the Dodgers, Brooklyn beat New York eight times in 12 games. But once he switched sides, Durocher's Giants got the better of the Dodgers in seven of 10 contests. 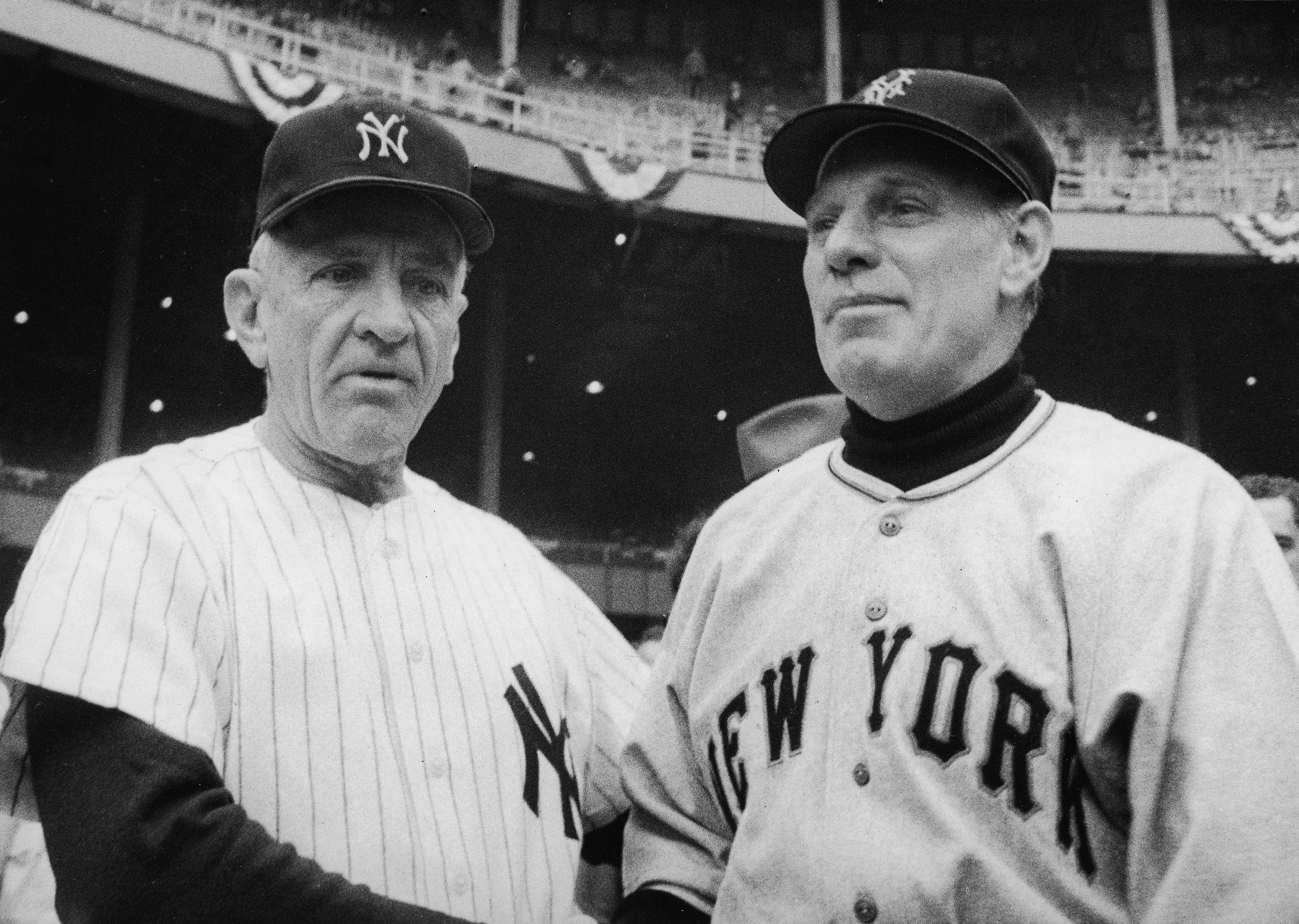 Both Casey Stengel and Leo Durocher began their managing careers with the Dodgers in the 1930s (Photo: FPG via Getty Images)

Dressen managed arguably the best Dodgers team of all-time, the 1953 squad that won a club-record 105 games and outscored opponents by a whopping 266 runs. But they lost the World Series to the Yankees for a second straight year, then when Dressen wanted a three-year deal, owner Walter O'Malley said hit the road and instead hired Alston, who famously worked on 23 consecutive one-year contracts.

Dressen would move on to manage the Senators in the American League from 1955-57, then actually served as a coach on Alston's staff in 1958 and 1959.

Hired to manage the Milwaukee Braves in 1960, Dressen first faced the Dodgers on May 4 at the Coliseum, where Bob Buhl out-dueled Don Dsysdale for a 2-1 Milwaukee win.

The Dodgers won the division in 2004 under Tracy, but a 91-loss season and toxic relationship between Tracy and general manager Paul DePodesta meant the end of the line for both in Los Angeles. But Tracy quickly found a home with the Pirates in 2006.

Tracy's first game against his old team came at PNC Park on on April 10, when the Dodgers won 10-4 behind a home run, a triple and four RBI from Jason Repko. Tracy's return to Los Angeles came on June 23, another blowout win for the Dodgers, 10-3.

From Steve Henson's game story in the LA Times:

Tracy, the Pirates' manager, waxed nostalgic with the media beforehand and greeted so many former players and team employees that Dodgers Manager Grady Little joked, "Tomorrow we'll just move our whole locker room over there."

Johnson actually managed the Dodgers before Tracy — directly before, in fact, skippering the club from 1999-2000 — but after LA didn't take another managerial job until the Nationals came calling over a decade later, in 2011.

Johnson's first game against the Dodgers came on July 22, 2011, a 7-2 win for Washington that included a grand slam for future Dodger a Jerry Hairston.

So really, Tracy is the only manager in the last 68 years that they faced almost immediately after parting ways. Which makes Mattingly's return to Los Angeles on Monday quite rare.