The beauty of baseball is that even in an otherwise miserable week we still got a memorable performance, with Clayton Kershaw providing the palate cleanser after a distasteful week.

First came manager Don Mattingly's return to Dodger Stadium, one that saw his Marlins win four times in four days, the first time the Marlins have ever swept the Dodgers in four games whether in Los Angeles or Miami.

Chief culprit for Miami was local product Giancarlo Stanton, who continued to torment the hometown team that did not draft him out of Notre Dame High School in Sherman Oaks in 2007. The slugger extraordinaire homered in three of the four games, including a three-run monster shot against Kershaw to turn Tuesday's game around, and went 5-for-14 (.357) with seven RBI in the sweep.

Former Dodger Dee Gordon drove home the tying run in the seventh inning on Thursday, then scored an insurance run later in the inning, but he had a worse week at Dodger Stadium than the Dodgers. With dubious timing, he dropped the appeal of his testing positive for a pair of performance-enhancing drugs, triggering arguably the most shocking suspension in the history of baseball's joint drug agreement, sidelining the slight speedster for 80 games.

Matt Kemp continued the old friend parade on Friday, hitting a go-ahead three-run home run for the Padres in the eighth inning Friday after Chris Hatcher, in his own words, "hung the piss out of a splitter."

The pitching was mostly fine for the Dodgers, save for the two key home runs mentioned above, but the overwhelming anchor on the week was an offense that all but disappeared. The Dodgers hit .167/.266/.260 for the week, scoring just 12 runs in seven games.

In the one game they won, they scored all of one run, which was all Kershaw needed in his 14-strikeout shutout win on Sunday to snap a six-game losing streak.

It was such a bad week that Kenley Jansen only saw one game, and even then it was just because he needed work. Naturally, Jansen allowed his first run of the season.

It was that kind of a week.

Dodger Batter of the Week: As tempting as it was to leave this award vacant for the week, there was one clear winner. Clayton Kershaw was 3-for-5 with a double on the week, driving in a run in both of his starts. Kershaw tied for the team lead during the week with two RBI, one of just five players on the team to drive in a single run over the last seven games.

The offense was so bad that Kershaw was one of only five Dodgers with more than two hits last week. Adrian Gonzalez was 0-for-20, Howie Kendrick was 1-for-16, Kiké Hernandez was 1-for-15 and Yasiel Puig was 2-for-24.

Dodger Pitcher of the Week: Kershaw nearly took home dual honors thanks to 24 strikeouts and no walks in his two starts, but the Stanton home run mentioned above was part of a five-run inning that made this award competition wide open. Alex Wood claimed the prize with a very solid seven innings on Friday night, allowing only one run to the Padres while striking out a season-high nine.

Honorable mention goes to Louis Coleman, who returned to throw five scoreless innings with five strikeouts, and to Joe Blanton, who retired 10 of 11 batters, with four strikeouts and no hits allowed for the week. 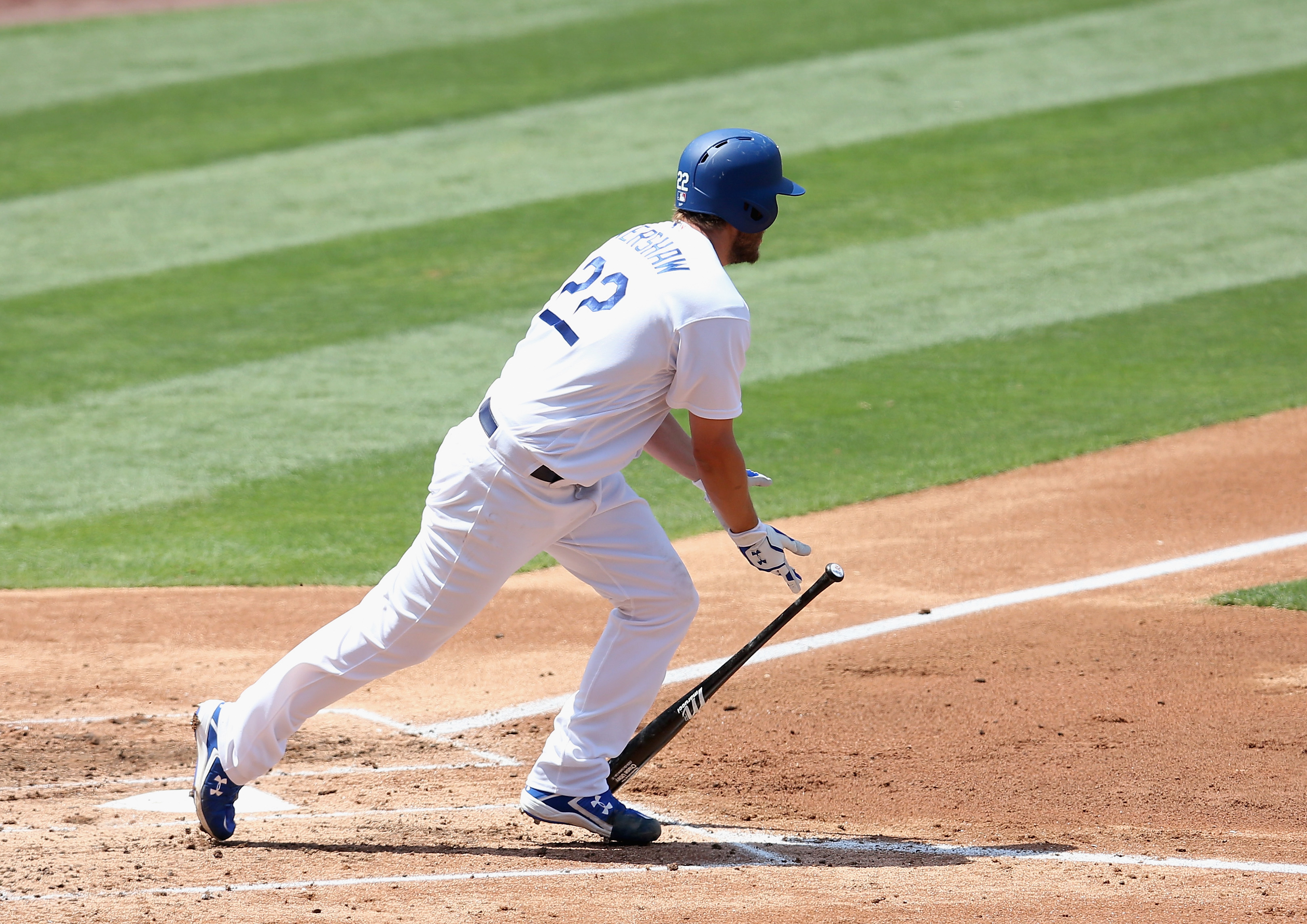 With only one win last week, this was an easy choice. (Photo: Stephen Dunn | Getty Images)

Worst homestands: The Dodgers needed Kershaw's masterpiece on Sunday to avoid the first extended winless homestand in the history of Dodger Stadium, which opened in 1962. The worst Dodgers' homestand in Dodger Stadium history was Aug. 28 to Sept. 6, 1987, when they lost eight of nine games to the Expos, Phillies and Mets.

The Dodgers technically had seven winless homestands in the last 55 seasons, but none longer than three games.

The Dodgers' 1-6 homestand last week tied five other miserable residencies, with the last coming Sept. 21-27, 1992, against the Braves, Reds and Astros, which back then — unlike now — were all in the National League West.

The 10-K run, don't walk: With 14 strikeouts and no walks on Sunday, Kershaw now has a ridiculous 54 strikeouts and three walks on the season, including 24 strikeouts since his last walk and no walks in three home starts in 2016. It was also the 15th game in his career with double-digit strikeouts with zero walks. Dating back to 1913, Kershaw has more than double such games than any other Dodgers pitcher.

Dazzy Vance, Don Drysdale and Sandy Koufax had seven games each with 10-plus strikeouts and no walks.

Innings eater: Kershaw recorded his 22nd career complete game and 13th shutout in Sunday's 1-0 win over San Diego. It was also the sixth straight start of at least seven innings by Kershaw, the longest streak by a Dodgers pitcher to open a season since Orel Hershiser had nine straight to begin 1989.

Kershaw, who led the majors with 232⅔ innings in 2015, leads the majors this season with 46 innings, an average so far of 7⅔ per start.

A fun game to play with Kershaw's career numbers is to see how far back you can go with a certain category and still achieve something. For instance, in his last 151 regular season starts, dating back to June 14, 2011, Kershaw has an ERA under 2.00, sort of (1.9956).

You can go back a whopping 196 career starts, dating back to his second start of the 2010 season, and Kershaw averages at least seven innings per outing in that span, 7.01 to be exact.

Helping yourself: Kershaw drove in A.J. Ellis with a single in the third inning on Sunday, providing the only run in a 1-0 victory in which he also pitched a shutout. It was just the eighth such time an LA Dodgers pitcher threw a shutout and collected the only RBI in a 1-0 win, and the first since Fernando Valenzuela against Philadelphia on May 23, 1984.

Valenzuela is the only Dodgers pitcher to appear on the list twice, having also beaten the Astros on Apr. 22, 1981 with an 11-strikeout shutout and an RBI single to score Pedro Guerrero at The Astrodome in Valenzuela's fourth major league start.

Bob Welch is the only pitcher on the list to have homered for the one run, taking Mario Soto deep on June 17, 1983.

Tuesday:  Left fielder Carl Crawford was activated from the disabled list, and pitcher Zach Lee was sent back to Triple-A after spending three days as unused long relief insurance.

The Dodgers run the Rich Butler gauntlet, hitting the road for some hot interleague play action. It starts with the first-part of a home-and-home series with the Rays (the return engagement in Los Angeles is July 26-27), a two-game set that gives the Dodgers off days on both Monday and Thursday. Beginning Friday, the Dodgers have 20 games in 20 days — the maximum consecutive game days allowed without consent per the collective bargaining agreement — beginning with a three-game set against the Blue Jays in Toronto.