The Dodgers ended their week with a much needed victory, and a 17-inning one at that, but there is no getting around that last week was a terrible week. The club lost five of seven games, and even saw Kenley Jansen blow two saves, snapping a streak of 25 straight conversions.

They lost three of four games to the Angels, then lost two of three games to the Padres, including two walk-off losses.

The week-long malaise saw the Dodgers' deficit in the National League West grow from one game to 4½ games back of San Francisco.

Dodger Batter of the Week: Finally getting an extended chance to play, Trayce Thompson started all seven games last week and led the club in home runs (three), runs (five), RBI (five) and OPS (1.080). Honorable mention goes to Joc Pederson for continuing his solid season and to Howie Kendrick for steadily improving, missing out on a cycle by a bounce on his ground-rule double in the 17th inning that might have otherwise been his missing triple.

Dodger Pitcher of the Week: Clayton Kershaw has reached a new level, even reaching double-digit strikeouts against the Angels, a team that doesn't strike out. He struck out 11 while allowing one run in eight innings. Honorable mention goes to Alex Wood, who set a career high with 13 strikeouts in just six innings on Saturday; and to Joe Blanton and J.P. Howell, who combined for 11 scoreless relief innings and 12 strikeouts. 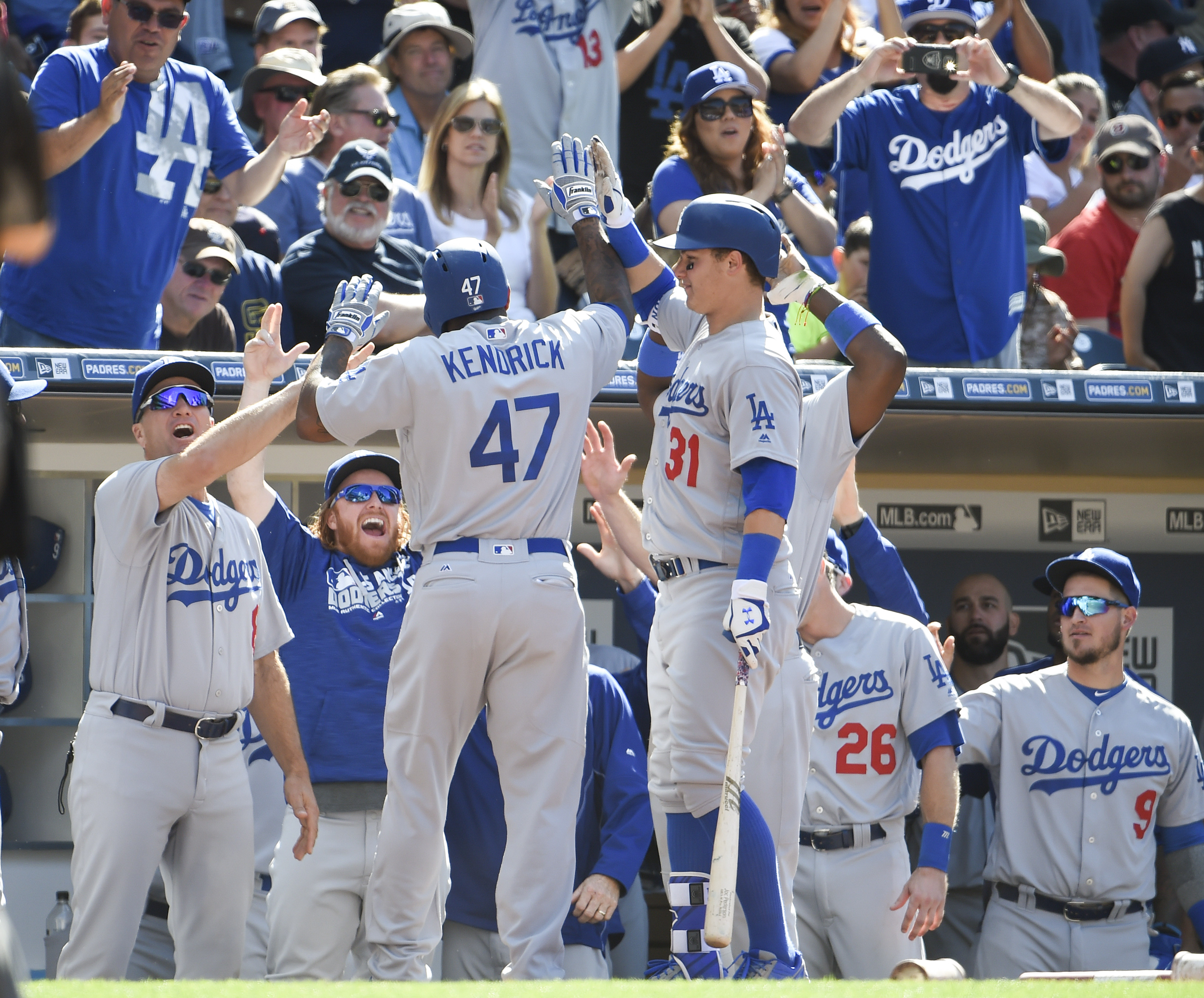 Howie Kendrick came within a triple of a cycle in Sunday's marathon in San Diego (Photo: Denis Poroy | Getty Images)

Unlikely walk-off: With his blown save on Friday night against the Padres, Kenley Jansen saw his streak of converting 25 straight saves snapped. The home run by Melvin Upton Jr. was the first walk-off homer that Jansen has allowed in his career.

Rest once per decade: First baseman Adrian Gonzalez left Monday's game with tightness in his lower back, and sat out each of the next three games. He was also out of the lineup on Friday, a fourth straight game, though he played the final two innings and had an at-bat. Gonzalez, who returned to the lineup on Saturday, missed three full games in a row for the first time since Aug. 20-23, 2005, when he was with the Rangers; and he was out of the starting lineup for four straight games for the first time since May 3-6, 2006, when he played for the Padres.

In a pinch: Sunday's marathon win in San Diego saw not only J.P. Howell and Ross Stripling bat for themselves while pitching in relief, but in the 15th inning there was something even more rare. Clayton Kershaw was used as a pinch-hitter for Howell, the fourth time in his career he was used as a pinch hitter. Kershaw grounded into a force out, and in his career as a pinch hitter is 0-for-2 with two sacrifice bunts.

Wednesday: After a pair of minor league rehab starts, pitcher Mike Bolsinger was activated from the disabled list to make a spot start in Anaheim, and infielder Charlie Culberson was optioned to Triple-A Oklahoma City.

Thursday: Relief pitcher Chin-hui Tsao was called up from Triple-A Oklahoma City, giving the Dodgers an eight-man bullpen, with Bolsinger optioned to the minors.

The Dodgers run the Bruce Berenyi gauntlet, returning home for three games against the Reds, then leave southern California for the first time in over two weeks, starting a road trip with a weekend series against the Mets at Citi Field. The weekend gives us two opportunities to see the Dodgers on exclusive broadcasts, Saturday on Fox and Sunday on ESPN2.

The Dodgers' rotation is a bit of a guess, with Sunday's 17-inning game wreaking a bit of havoc with the schedule. Thursday's off day can be used to reshuffle things, depending on when and where Ross Stripling gets slotted back in.