The Dodgers rebounded from a poor week with a very strong week. They swept a team they were supposed to beat in the Reds, then captured two of three on the road against the playoff-contending Mets, who knocked them out of the postseason in 2015.

The week was good enough for the Dodgers that even in their loss they mounted a ninth-inning rally to tie the game, only to lose in the bottom of the ninth.

That was a game they had every right to lose much earlier, thanks to a shortened, shaky debut by a wild Julio Urias on Friday night. But one day, not too long from now, we will look upon that game and this week as the answer to a trivia question, as to when Urias made his debut.

The Dodgers had to do well, since San Francisco matched them every single day. In fact the two NL West rivals have matched results for each of their last seven games. Unfortunately for Los Angeles, that still means a 4½-game deficit in the division.

Dodger Batter of the Week: Amid all the boos, Chase Utley hit .350 with nine runs batted in. He hit a game-tying three-run double in the ninth on Friday, then hit two home runs including a grand slam in Saturday's blowout win.

Adrian Gonzalez also had a solid week, including four hits Saturday and the game-winning two-run single in the ninth inning on Sunday.

Dodger Pitcher of the Week: Clayton Kershaw was dominant in his two starts, pitching a shutout on Monday, then pitching into the eighth with 10 strikeouts and no walks on Sunday. 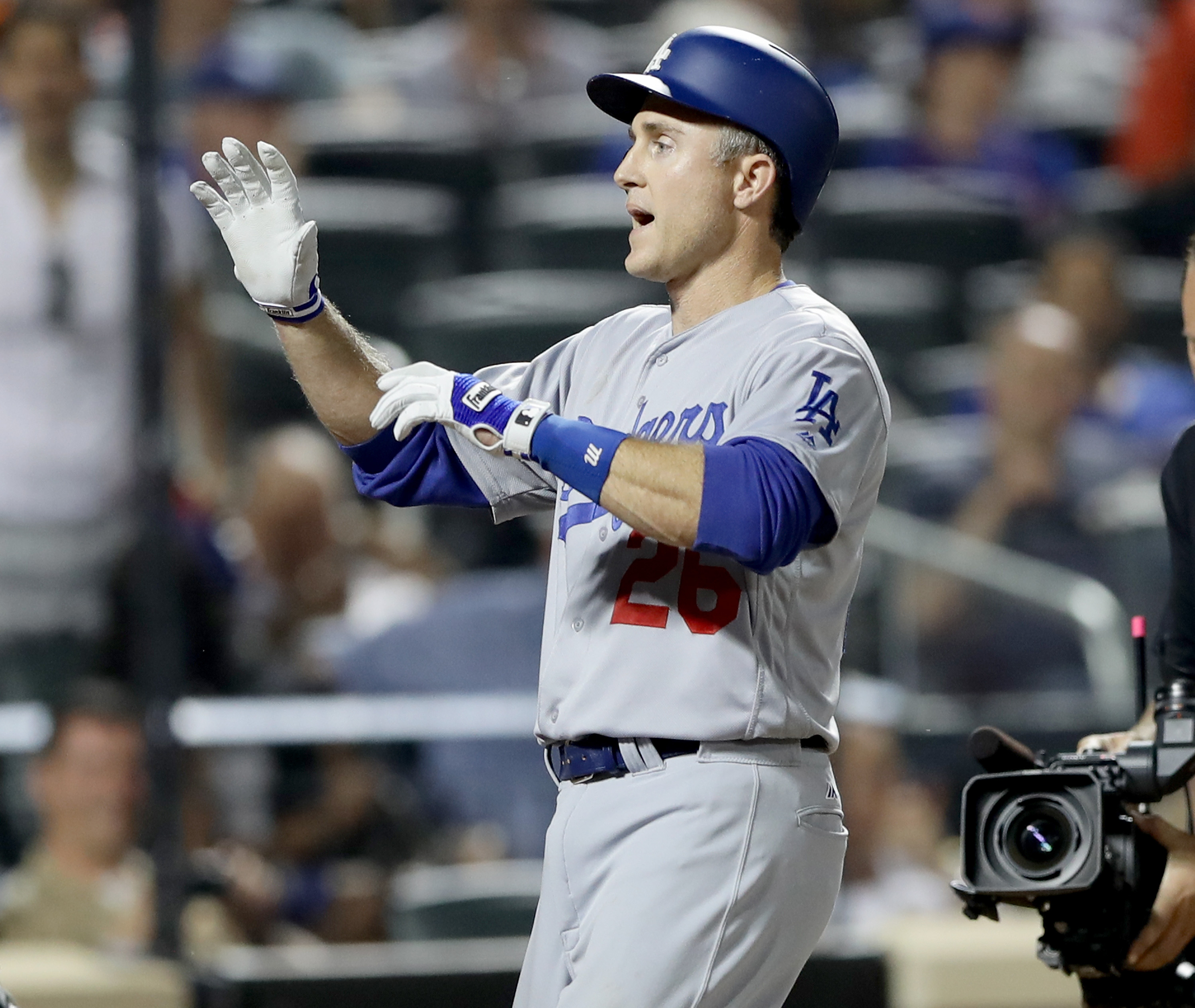 Chase Utley was the perfect villain for New York fans over the weekend, especially on Saturday (Photo: Elsa | Getty Images)

Steaks at the top: Chase Utley drove in four runs on Friday in New York, then followed that up with five RBI on Saturday. He is just the seventh Dodger since 1980 with back-to-back games of at least four RBI, and the first once since June 5-6, 2005.

No RBI, no problem: The Dodgers' win on Monday over the Reds saw the only run of the game score on a double play. The 1-0 victory marked just the 19th time since the club moved to Los Angeles in 1958 that they won a game with no RBI.

Stingy century mark: Clayton Kershaw struck out 10 on Sunday night against the Mets, giving him an MLB-best 105 strikeouts against only five walks on the season. Kershaw set a major league record for fewest walks at the time of his 100th strikeout of the season. The previous record was seven, by Cliff Lee in 2010, per the Elias Sports Bureau.

Monday: One day after a marathon 17-inning game in San Diego decimated the pitching staff, reinforcements were brought up in the form of Mike Bolsinger and Luis Avilan getting recalled from Triple-A Oklahoma City. Pitcher a Ross Stripling was optioned to OKC, and Chin-Hui Tsao was placed on the 15-day disabled list with a right triceps strain, retroactive to May 25.

Thursday: On the off day, Avilan was optioned to Oklahoma City, paving the way for ...

Friday: Julio Urias was called up from Triple-A Oklahoma City to make his major league debut. To make room on the 40-man roster, pitcher Yimi Garcia was transferred from the 15-day to the 60-day DL.

Saturday: One day after his brief major league debut, Urias was optioned to Oklahoma City. Relief pitcher Casey Fien was called up to the Dodgers, with outfielder James Ramsey designated for assignment to make room on the 40-man roster for Fien.

The Dodgers run the Jeff Blauser gauntlet, heading to Wrigley Field to face baseball's best team in a four-game series against the Cubs, followed by a return trip home and a weekend series against.the Braves.