The Dodgers continued to struggle on offense last week, scoring only 13 runs in six games, losing two of three games both to the Rockies and to the rival Giants.

The week might have been a break-even week but even Kenley Jansen stumbled, blowing a save on Saturday night to the Giants, the difference between the Dodgers finding themselves three games back instead of the actual five games behind in the National League West entering Monday.

"We're having a hard time putting runs on the board," manager Dave Roberts told reporters on Sunday, per Mark Chiarelli of MLB.com. "I know it's not from lack of preparation [or] as far as talent within the group. I don't have an answer."

During the week the Dodgers had a .190 batting average on balls in play. They are also last in the NL in BABIP on the season, suggesting some luck might be due to turn in their favor. Just like at least half of the Dodgers lineup has a track record they haven't lived up to yet in 2016.

The Dodgers trail the division by five games despite having a better run differential (+36) and pythagorean winning percentage (.566) than the Giants (+26, .545).

Maybe they can make a trophy for that, and while they're at it  also make one for leading the National League in 2015 in wOBA.

Dodger Batter of the Week: As a team, the Dodgers hit .172/.260/.274 with nine extra-base hits in six games, so the pickings were slim. This one goes to Justin Turner, who had one-third of the extra-base hits, including the game-winning home run on Friday.

Honorable mention goes to Joc Pederson, who also had three extra-base hits, including a splash hit on Sunday in San Francisco, and was one of two Dodgers with an OPS over .688 during the week.

Dodger Pitcher of the Week: Friday's starting pitching showdown was great, and Clayton Kershaw wins the weekly award this week on the basis of his 13 strikeouts and no walks, his sixth double-digit strikeout and no walk performance this season.

Honorable mention goes to Kenta Maeda, who struck out a season-high nine on Wednesday but suffered a tough-luck loss for allowing all of one run to Colorado. Also, Julio Urias was very effective in his two starts, striking out 14 and walking two, though he also got no run support on Sunday night. 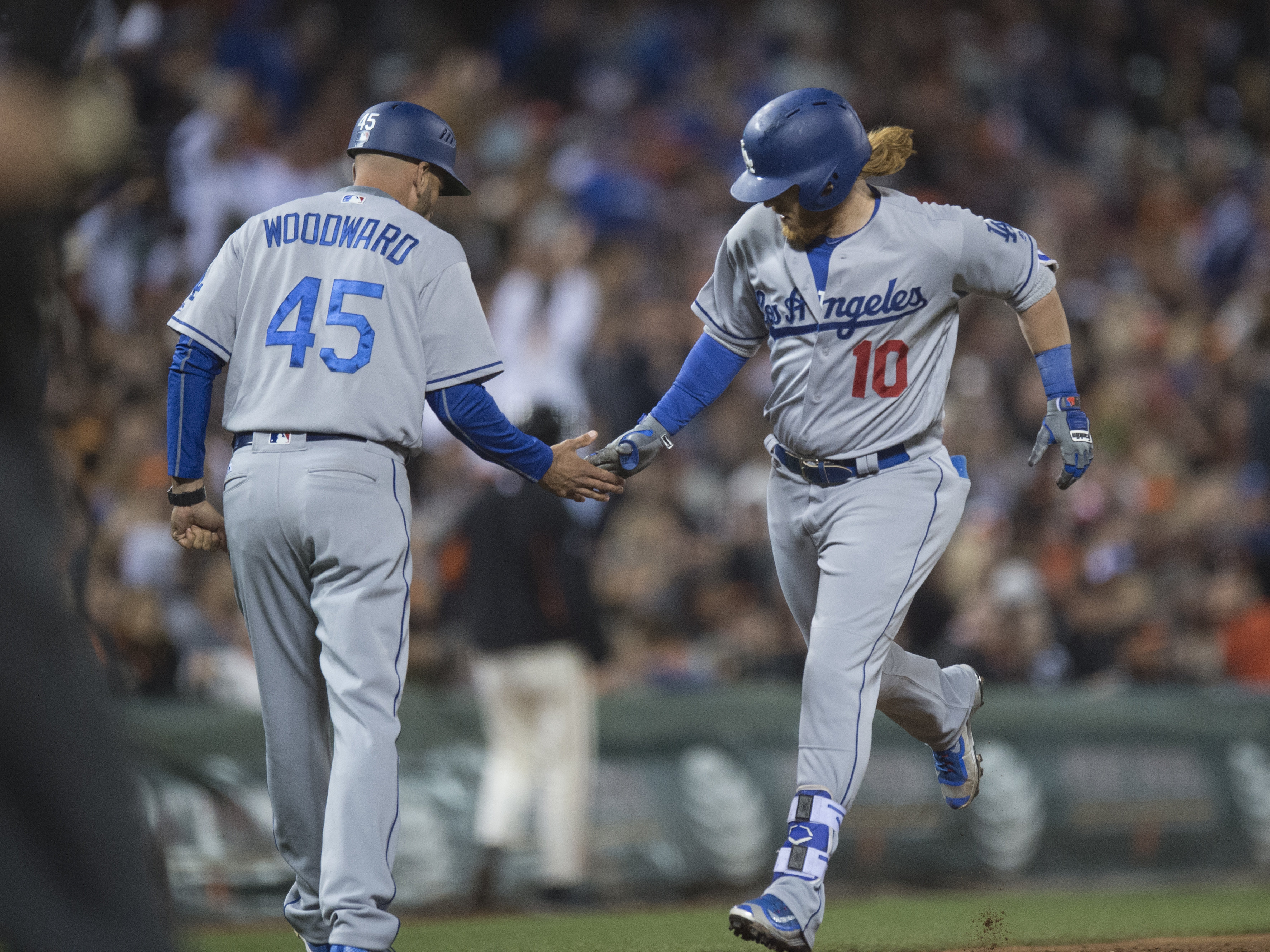 Kershaw and Cueto were great, then Turner hit a game-winning home run back when hope was a real thing (Photo: Kenny Karst | USA Today Sports)

Saturday: Though it didn't involve a player on the 40-man but was making a good chunk of money this season, so the release of Jose Tabata gets a mention here.

Sunday: Pitcher a Frankie Montas was reinstated from the 60-day disabled list and optioned to Triple-A Oklahoma City.

The Dodgers run the Damian Miller gauntlet, ending their road trip with three games in Phoenix, followed by a four-game weekend series at home against the Brewers.