The Dodgers' Class-A affiliate in Great Lakes is the organization's farthest affiliate both literally since Dow Diamond in Midland, Mich. is 2,300 miles from Dodger Stadium, and figuratively because there are three levels in between the Midwest League and the majors. But the Loons are still an important part of the developmental process, and from afar our gateway to the team is their lead play-by-play announcer, Chris Vosters.

Vosters is in his second year calling games for Great Lakes, and before that was the second play-by-play announcer for Double-A Frisco.

Vosters is still very young, having graduated from the University of Wisconsin in 2013. But he is also experienced announcer, having served as sports director for WSUM 91.7 FM, the campus radio station in Wisconsin. He picked a good time to be a Badger, covering three Rose Bowls during his time in college and two Big Ten Championship Games as well.

He is a nine-time Wisconsin Broadcasters Association award winner.

Baseball wasn't a big part of Vosters' repertoire in college, mainly because Wisconsin is the only Big Ten team without a baseball team. So Vosters branched out, and during his last two summers he called games for the Northwoods Baseball League, a wood-bat summer league in the upper midwest.

"I figured what I needed most was on-air reps," he said.

After graduating college, Vosters went to the winter meetings at Walt Disney World in Orlando. With his broadcasting experience in college combined with the summers calling baseball, Vosters was able to land the job with Frisco, where he spent 2014.

He joined the Loons in 2015 as lead play-by-play announcer, calling games for ESPN 100.9 FM, whose offices are in the stadium where the Loons play. The radio station and the team share the same owners, the Michigan Baseball Foundation.

Vosters also serves as program director for the radio station, giving him uncommon year-round job security. It also gives him the chance to call other sports, including high school football and basketball, as well as some Division-II football in Michigan during the baseball offseason.

"The season is so long, it's easy to pigeonhole yourself into just doing baseball," Vosters said. "I relish the opportunity to call multiple sports and get my feet wet in a bunch of different areas. Hopefully it will keep me well-rounded."

A sample of Vosters' work, from Sunday

In his two seasons behind the mic for the Loons, Vosters has seen numerous Dodgers prospects come through Great Lakes, and young ones at that. He said 2015 stood out with both pitcher Grant Holmes and outfielder Alex Verdugo, the club's top two draft picks in 2014.

"That was pretty special having two top-five or top-10 prospects in the organization for almost all year," Vosters said.

At this time last year Verdugo, who just turned 19, was hitting .224/.264/.306, struggling to adjust. But he showed steady improvement after working with then-hitting coach Jay Gibbons, who is with Class-A Rancho Cucamonga this season.

Verdugo hit .349/.372/.462 the rest of the way for Great Lakes, in 49 games, and got promoted to Rancho Cucamonga with three weeks left in the regular season.

"To see the transformation that he underwent, growing up as a teenager during the season. He not only transformed his style of play, but his attitude as well," Vosters said. "I could really see him mature as the season went on and lived up to that prospect potential he had going into the season. He's a guy to keep your eye on going forward.

"He's the real deal. He's got an excellent swing. People have questioned his ability to play in center field long term. He's definitely got the arm for a corner position, and he doesn't have the standout speed, but he's got an uncanny ability to read the baseball off the bat, and he has an unbelievable first step. He takes the best routes to a fly ball that I have ever seen, albeit in my limited experience."

Verdugo this season has been with Double-A Tulsa all year, hitting .283/.340/.462 as one of the youngest players in the Texas League. He hit a walk-off home run for the Drillers on Tuesday.

This year the Loons are even younger, highlighted by a pair of 18-year-old infielders — Brendon Davis, the Dodgers' fifth-round pick in 2015 out of nearby Lakewood High School, and Omar Estevez, in whom the Dodgers invested $6 million during the 2015-2016 international signing period.

"I can only imagine what the players are soaking up from them on a day-in, day-out basis. I think there is tremendous leadership on the coaching staff this year." -Chris Vosters, on the Loons' coaches

"There is an incredibly raw group of talent with the team. The two 18-year-olds epitomize that, but they also epitomize the potential, too," Vosters said. "Brendon Davis didn't play baseball his senior year of high school. If you throw him a curve ball in the dirt, it's probably the first time he's seen a good curve.

"He's 6'4 and a beanpole. When he gets muscle packed onto that frame, he'll start to tap into that power potential."

"He has a mature and advanced swing for somebody who is only 18. He's striking out a lot right now, which is in line with the rest of the team," Vosters said. "He has a really pretty swing. He has gap power to left field and right field. The hit tool for him is really going to be his ticket to success."

There is also context to consider, with the Midwest League generally not friendly to offenses. Its 4.04 runs/game average is third-lowest in the minors, ahead of only the International League (3.94) and Florida State League (3.92). The average age of the league is 21, and it marks the first full-season stop for nearly everyone on the team.

It is also really, really cold in Michigan, especially early in the season, something that was tough even on Vosters, who went to school in Wisconsin.

"It's tough on me, someone who is used to the Midwest," he said. "By the time April rolls around, before getting cabin fever, you want nothing but 75 degrees and sunshine. But instead on April 9 we got 28 degrees and snow, the coldest opening day in Loons history."

Great Lakes has had seven games postponed by weather this season, including five in April. 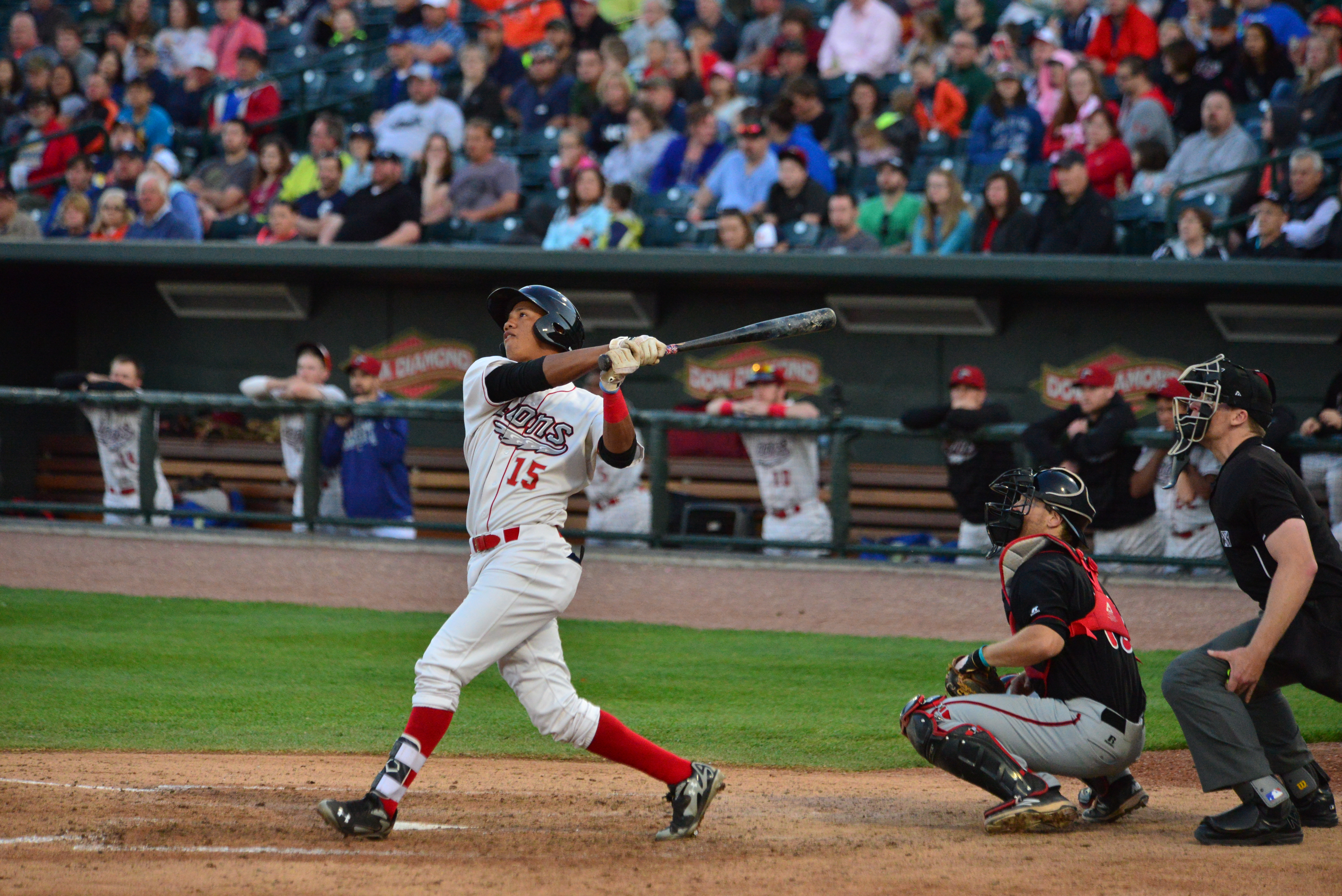 With young and raw players like Davis and Estevez, it helps that the Loons have such an experienced coaching staff. On manager Gil Velazquez's staff include pitching Bobby Cuellar, in his 31st year as a coach and with a resume that includes 11 years in the majors; and hitting coach John Valentin, in his ninth year coaching with the Dodgers, after having spent the last three seasons on the major league staff.

"I think it's very unique to have a single A coaching staff with that kind of experience. I have learned a ton by working with them, just about the game and the mental side of the game," Vosters said. "I can only imagine what the players are soaking up from them on a day-in, day-out basis. I think there is tremendous leadership on the coaching staff this year."

In addition to the coaching staff, Vosters has seen first-hand the effects of the Dodgers' transition to providing all-organic meals for their minor league affiliates every day, even on the road.

At home, the Loons meals are prepared by the team's executive chef, Andrea Noonan. On the road, the Dodgers have pre-arranged deals with a caterer in every city, providing meals for road games.

"Other teams I have seen are just eating peanut butter and jelly, and bananas," Vosters said. "Whereas the Dodgers' postgame meal in South Bend was grilled chicken, barbecue pork, a fruit tray, a vegetable tray, a pasta salad. Dinner earlier on the trip was cooked asparagus, cooked carrots, stewed meats and red-skinned potatoes."

Vosters said he has heard the Dodgers spend up to $1,000 per day for each affiliate to eat, while some other minor league teams spend $75 per day.

"If you're going to spend $6 million in the case of Omar Estevez, or even $5,000 on a four-year college player in the draft, why wouldn't you continue to invest in that player, making sure he has all of the best kind of tools he can to succeed to reach his full potential?"

You can listen to Vosters call Loons games on ESPN 100.9 FM, and you can follow him on Twitter at @CJVosters.