Jharel Cotton gets the win in MLB Futures Game

Share All sharing options for: Jharel Cotton gets the win in MLB Futures Game

A look around the Dodgers' minor leagues on Sunday, including a pair of players not with their teams, on a national stage at the MLB Futures Game at Petco Park in San Diego.

Players of the day

Both Dodgers saw time in the Futures Game on Sunday. Jharel Cotton faced just one batter, getting Phillies outfielder Dylan Cozens to fly out in foul territory, thanks to a tremendous, leaping catch by Cubs outfielder Eloy Jimenez.

Cotton ended the top of the eighth inning with the World team down 3-2, but when Yoan Moncada hit a two-home run in the bottom of the inning, it gave Cotton the win as the World team beat the U.S. for the first time in seven years.

Willie Calhoun played the final four innings at second base for the U.S. team, and went 0-for-2 at the plate, flying out to the warning track against Ricardo Pinto of the Phillies in the sixth inning, and grounding out to second base in the eighth inning against Pirates right-hander Dovydas Neverauskas.

Oklahoma City scored all their runs in the first three innings to beat the Omaha Storm Chasers (Royals) 8-5. Corey Brown was 2-for-4 with a two-run home run, and James Ramsey was 2-for-4 with a home run and drove in three runs. Ramsey in his last 12 games is 18-for-35 (.514) with three doubles, a home run, three walks and eight RBI. 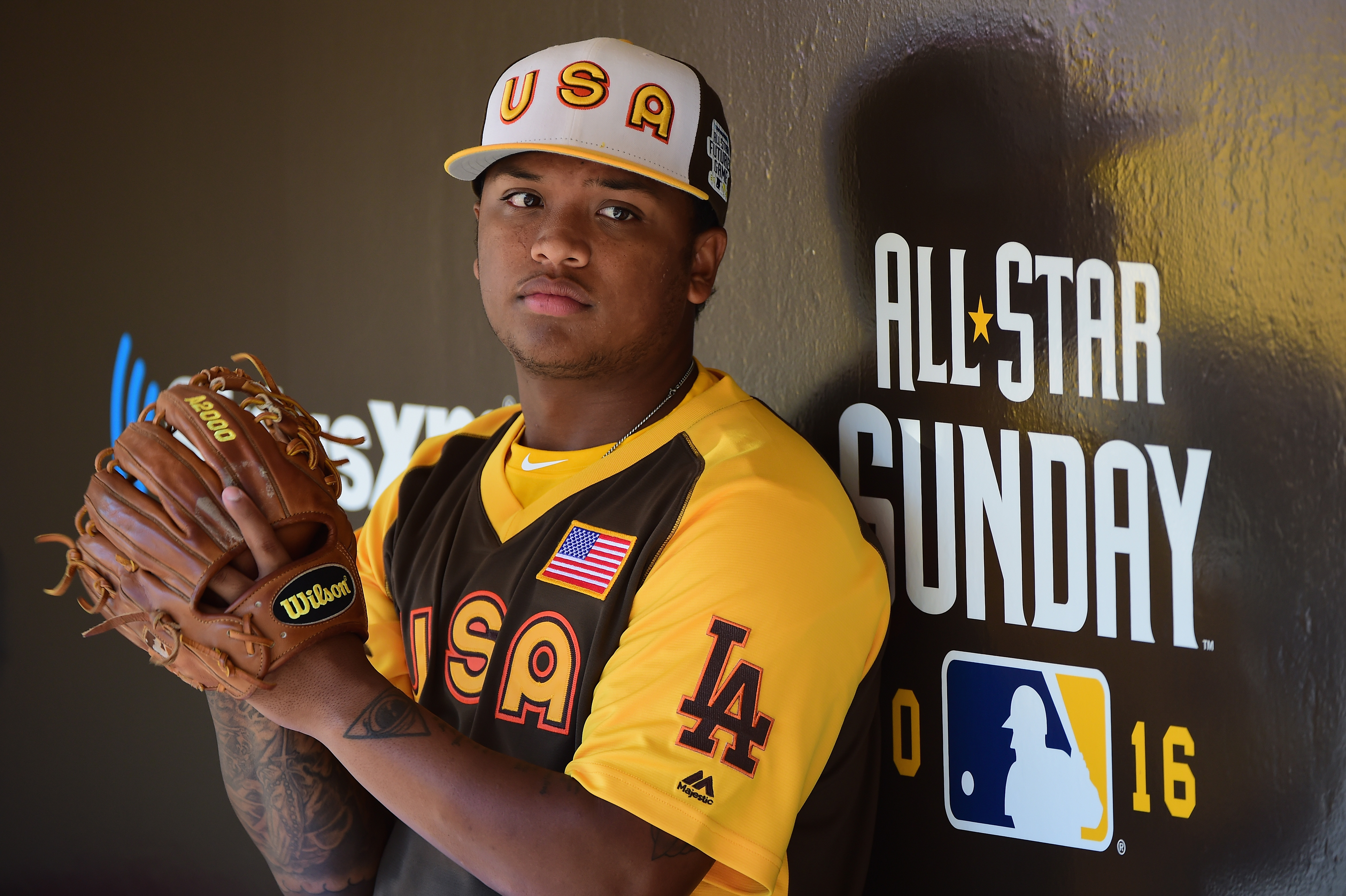 Willie Calhoun waits his turn in the dugout before the Futures Game on Sunday (Photo: Harry How | Getty Images)

Julio Urias pitched a scoreless seventh inning in relief, allowing one hit while striking out one. It an his Triple-A scoreless streak to 28 consecutive innings, dating back to May when he last pitched for Oklahoma City.

OKC is off for three days for their own All-Star break.

Lars Anderson had a perfect day at the plate, helping the Drillers to a 7-6 win over the Corpus Christi Hooks (Astros). Anderson was 3-for-3 with a pair of runs scored and two RBI. The first baseman singled twice, doubled, walked and even stole a base in the win.

Yaisel Sierra had another rough start for the Quakes, allowing six runs on six hits, including a home run and three doubles in a 6-5 loss to the High Desert Mavericks (Rangers) in Adelanto.

Omar Estevez, to whom the Dodgers paid a reported $6 million bonus in November, stayed red hot with a three-run home run in the Loons' 10-1 win over the Dayton Dragons (Reds) on Sunday. Estevez was 2-for-4 with four RBI, extending his hitting streak to eight games. During the streak he is hitting .400 (12-for-30) with three home runs, three doubles and four walks.

"I feel good at home plate and I’m happy about the results," Estevez told ESPN 100.9-FM following the game. "I’m just putting in a lot of work in the cage and I’m just trying to get better. There’s nothing specific, just tweaking things here and there that’s been helping a lot."