Corey Seager is a decided underdog heading into the 2016 Home Run Derby on Monday night at Petco Park in San Diego, trying to become the second Dodgers rookie in as many years to make a splash at baseball's best power display.

Pederson hit 39 home runs in three rounds in last year's contest, falling narrowly in the final round to Todd Frazier, then of the Reds in his hometown park in Cincinnati. Pederson had a tough road in 2015, beating Manny Machado and Albert Pujols to get to the final.

This year, Seager is seeded eighth out of eight contestants, who were ranked on their home run totals through last Wednesday. Seager in the first round faces major league home run leader Mark Trumbo, who has 28 bombs on the season compared to Seager's 17.

Should Seager advance, in Round 2 he would face the winner of Giancarlo Stanton and Robinson Cano. 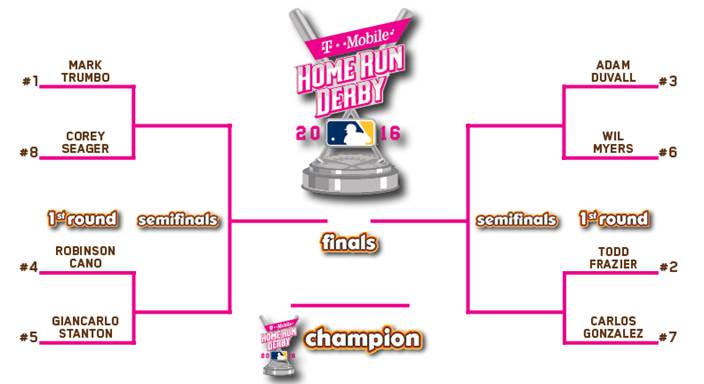 The rules are basically the same as last year, with a few tweaks. It is a single-elimination bracket with each pair going head-to-head in each round.

Players can earn a 30-second bonus round in each round for hitting at least two home runs of 440 feet or longer. Last year, the minimum distance was 425 feet.

Raul Mondesi hit two home runs, finishing tied for sixth in 1995, and Matt Kemp finished seventh with two home runs in 2011. One year later, Kemp was last out of eight with just one home run, but that was better than Piazza, who was shutout in 1993 and 1994, and Yasiel Puig, who also put up a bagel in 2014.

Seager's inclusion in the field this year gives the Dodgers a Home Run Derby participant in three straight seasons for the first time since 1993-1995.

Seager is the first shortstop in the Home Run Derby since Hanley Ramirez represented the Marlins back in 2010.

ESPN will televise the Home Run Derby beginning at 5 p.m. PT, with Chris Berman back, back, back for play-by-play, alongside analysts Aaron Boone and Jessica Mendoza.