The 2016 minor league season has long past the halfway mark, but with lull of the All Star break and the trade deadline fast approaching, now is a good time to look at the current state of the Dodgers' farm system.

Outside of graduations, not much has changed in the top 10 prospects. I’ve moved player grades just a hair on a few guys, but the guys at the top of the list have simply played as advertised or been hurt. The biggest changes come in the second half of the top 20, as several players have played their way up the board and a few have played their way off of it.

Unlike the offseason prospect rankings, the mid-season ranking will not include the ceiling or risk grades, nor will it include the prospect tier breakdown (you need something to look forward to during the off-season, after all). I will tell you that while the top tiers have thinned some due to graduation, the 55-grade tier has grown substantially and represents the real depth of the system.

As always, feel free to ask me any questions about the list or players either in our out of these rankings. That being said, here are my up to date top 20 Dodgers prospects:

20. Andrew Toles, CF, Los Angeles: I’ve already covered Toles' meteoric rise through the system this year, but it’s important to also acknowledge that he has a specific ceiling. Toles will serve a role this year as a defensive sub and speed merchant, but will really need to show a consistent hit tool and clean up his plate approach to carve out an eventual everyday job in the majors.

19. Trevor Oaks, RHP, Oklahoma City: I probably won’t be the high man among prospect rankings on Oaks again this off-season, as he’s pitched his way across two levels with a bowling-ball sinker that flashed above-average velocity in Double-A Tulsa. He’s a ground ball machine that will eat innings, but probably not much more than that.

18. Jordan Sheffield, RHP, Ogden: Sheffield was sliding on my draft board before the Dodgers selected him No.36 overall, and he has yet to pitch professionally to change his stock. He was excellent value in the supplemental first round and the Dodgers will likely give him every opportunity to stay in the rotation. The fallback plan here is a late-inning reliever with two easy plus pitches.

17. Will Smith, C/2B, Great Lakes: Smith was too much of an unknown to feature on my draft big board, but I have bumped up his initial grade after earning a quick promotion to full-season ball and bringing his solid college plate discipline to the professional level. He is an athletic catcher that could play multiple positions, but is also a one-year college standout that must answer questions on the overall ceiling of his bat. 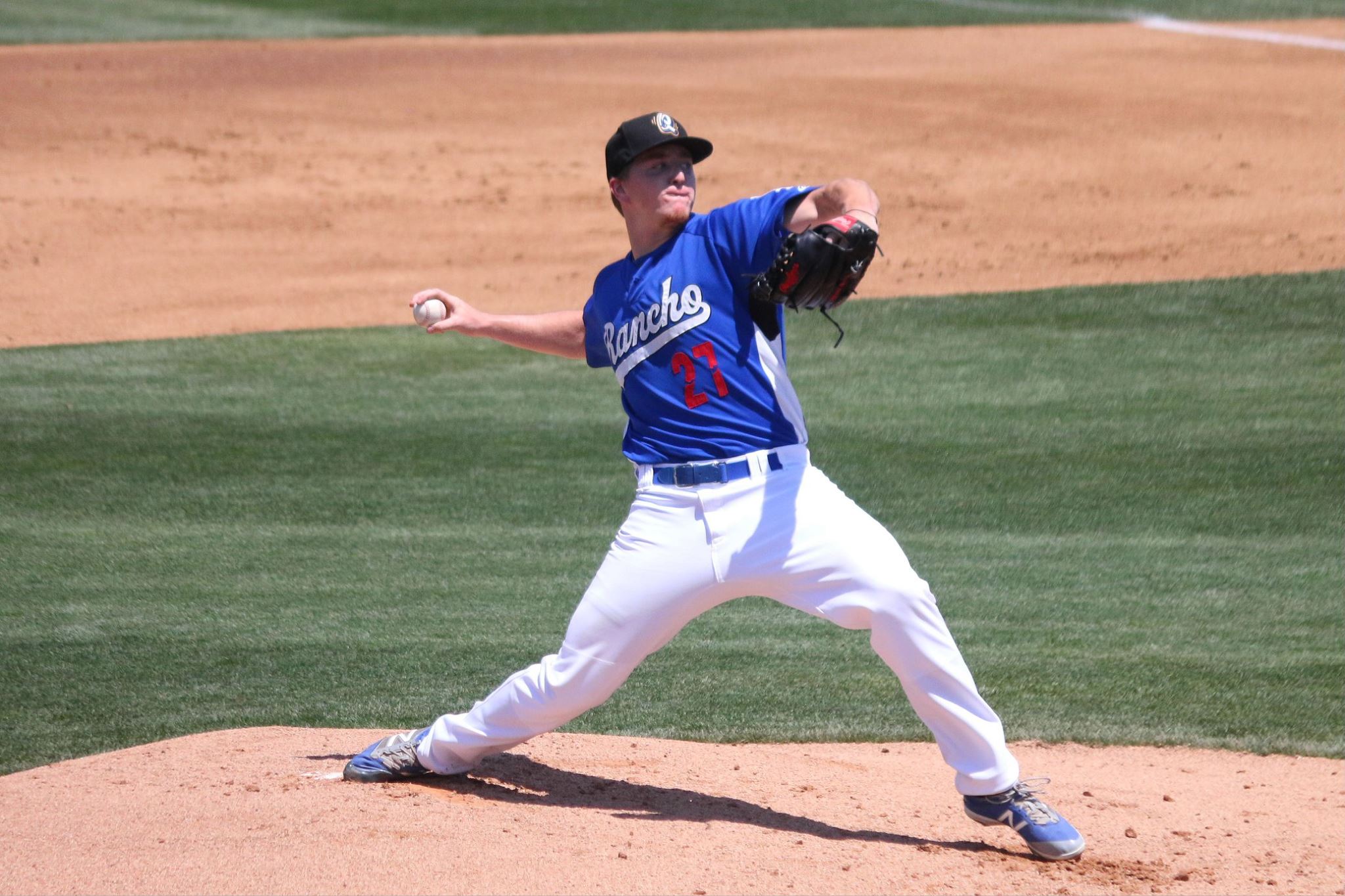 16. Josh Sborz, RHP, Rancho Cucamonga: Sborz hasn’t received the promotion to Tulsa I expected after several pitchers moved through Double-A, but that doesn’t mean he hasn’t taken a step forward this season. A switch to relief is now more in doubt as Sborz has expanded his repertoire and could be an enticing trade chip at the deadline.

15. Mitchell Hansen, CF, Ogden: Hansen’s production has been a revelation after a rocky professional debut. Still, while the results are encouraging, he has yet to reach full season ball, where Great Lakes should provide a real test to his offensive gains. Highly toolsy, he might just require some adjustment time at each level.

14. Ariel Sandoval, RF, Rancho Cucamonga: I had to keep myself from ranking Sandoval much higher, as his overall offensive aptitude is still underdeveloped. Finally getting to see Sandoval on film this year, his live body and athleticism was an immediate standout. Sandoval has easy plus raw power and arm, and when he refines his approach to stop swinging at pitcher’s pitches, he has the upside to hit in the middle of the lineup at the big league level.

13. Imani Abdullah, RHP, Great Lakes: Abdullah’s development is much further along than I anticipated, and prospect rankings that prioritize upside might put him in the Dodgers’ top 10. Abdullah has walked just three batters in 40 innings this year, and his velocity has jumped a tick or two. He has plenty of body to still grow into, so these next few years could be exciting.

12. Brock Stewart, RHP, Oklahoma City: The Andrew Toles of the pitching side, I knew Stewart to possess plus arm strength, but his pitchability has impressed this year. He’s mid-low rotation upside, but has a durable innings-eating frame and some potential to miss bats with an above-average fastball and a change that flashes plus. Improving the slider (deeper or later break, less cuter action) will make the difference between sticking long term in the rotation or merely providing cover for the back end.

11. Gavin Lux, SS, Arizona Rookie: It says something for the state of the farm system that the Dodgers’ first-round pick isn’t automatically in the top 10. Lux may lack the upside of the typical prep shortstop, but he should easily stay at the position and has the frame and aptitude to grow into some offensive potential. He’s a little ways away but the Dodgers won’t feel the need to rush him. 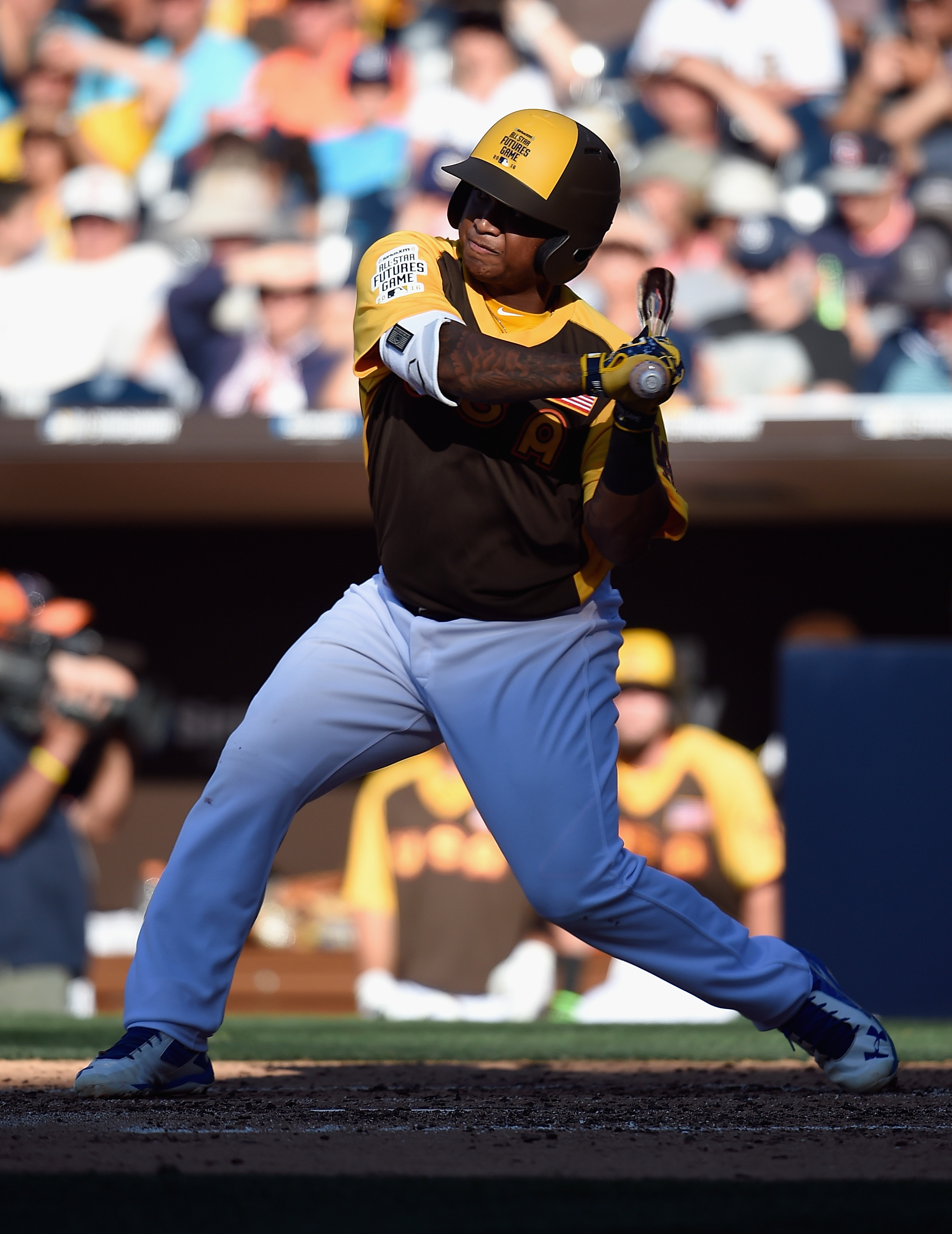 10. Yadier Alvarez, RHP, Arizona Rookie: The last two months of the minor league season will likely mean more to Alvarez’s stock than the past month. The reports on Alvarez’s stuff are that he’s as advertised (a very good thing), but I don’t think we are learning much from an evaluative standpoint while he’s still in Rookie League. He needed time to get back into organized ball and get acclimated stateside, but from a talent/age standpoint, it would be nice to see him move to Ogden soon.

9. Willie Calhoun, 2B/LF, Tulsa: Calhoun is another "stock unchanged" player. He’s answering most all questions regarding whether or not he can hit (he can), but has left practically every question about his defensive home unanswered. His bat should have him higher on this list, but second base is a real work in progress and the Dodgers cannot stash him at designated hitter.

8. Frankie Montas, RHP, Oklahoma City: This season has not gone to plan for Montas, who is young enough that a mulligan doesn’t hurt his status. The flip side is that Montas has been hurt for the majority of time that the Dodgers have needed a starter, should he return healthy to a more stable rotation, it could quicken his move to relief.

7. Austin Barnes, C, Oklahoma City: Just a slight dip in grade for Barnes, who hasn’t quite inspired in a handful of limited big league looks. I still believe he will hit at the next level and could sneakily be a major cog in the Dodgers’ lineup and defense. Barnes needs an extended look at some point, and I’d still rather see him get a shot over dealing meaningful prospects for Jonathan Lucroy.

6. Alex Verdugo, CF/RF, Tulsa: As expected, Verdugo has looked like the system’s most natural hitter while in Tulsa. The pop is coming along as well, but might not be more than average at the major league level, which will make a difference if he settles in right field as I expect him to. I previously compared him to Nick Markakis and I still see similarities in Verdugo’s potential future production.

5. Cody Bellinger, 1B, Tulsa: Bellinger has started to fill out and he’s still retained his athleticism. He’s also shown power to all fields in my looks in Tulsa, even if the power production has dipped. I wonder if Bellinger might not be better served cutting down on his swing length to improve on contact, but he’s still a unique first base prospect given his athleticism and potential for above-average power production.

4. Walker Buehler, RHP, Arizona Rookie: It would be unfair to change Buehler’s grades after I knew coming into the year that he wasn’t likely to be pitching by now. If Buehler comes back healthy and in sophomore-season-at-Vanderbilt form, this ranking will be easily justifiable.

3. Grant Holmes, RHP, Rancho Cucamonga: A slight grade dip for Holmes, if only because I over-hyped his still immense ceiling. Holmes has made small strides in refining his command and he’s not been overmatched as a 20-year-old pitcher in the daunting offensive environments of the California League. Holmes is still the organization’s top trade chip.

2. Jose De Leon, RHP, Oklahoma City: His pitching has been fine, has health has not. If it now too is fine, you will see him pitch in Los Angeles this year. De Leon is ready to help a stretch run in either the rotation or out of the pen. De Leon’s velocity and slider have always been over-hyped, but he knows how to miss bats with a plus change and deceptive late action on the fastball.

1. Julio Urias, LHP, Oklahoma City: This is the last time you will see his name on this list. Urias answered the call for a couple of turns in the rotation and showed just how bright his future is. I still contend he’s elite number-two, not a true number-one, but that’s splitting hairs. A Kershaw-Urias 1-2 will make serious noise in 2017, but until then expect Urias to return to Los Angeles soon as one of Kenley Jansen’s primary wing men, or better yet, a dynamite sixth-and-seventh-inning guy for a rotation struggling to pitch past five innings.