The Dodgers opened up their post-break schedule with their second-best offensive output of the year, but the rest of the weekend in Arizona proved to be disappointing and a rather large missed opportunity.

While the Giants were busy getting swept in San Diego, the Dodgers came frustratingly close to a sweep of their own, coming within a strike of beating the Diamondbacks on Saturday, then rallying for five runs in the final two innings on Sunday, only to stall and leave the tying run 90 feet away.

But even after the maddening weekend the Dodgers did still gain a game in the National League West, and now trail San Francisco by 5½ games.

Dodger Batter of the Week: A trio of strong candidates emerged in the weekend series in Phoenix, but Justin Turner took the cake with a pair of home runs and six RBI. Chris Taylor nearly hit for the cycle on Friday and was the first Dodgers second baseman to drive in six runs since Jackie Robinson in 1949, and all Howie Kendrick did was follow a three-hit game with a four-hit effort en route to an 8-for-14 week with a .647 on-base percentage.

Dodger Pitcher of the Week: In just his third start back from Tommy John surgery, Brandon McCarthy struck out eight and walked none in six scoreless innings on Saturday in Phoenix in a no-decision against the Diamondbacks. The right-hander has a 1.69 ERA and 22 strikeouts in 16 innings since his return to the Dodgers. 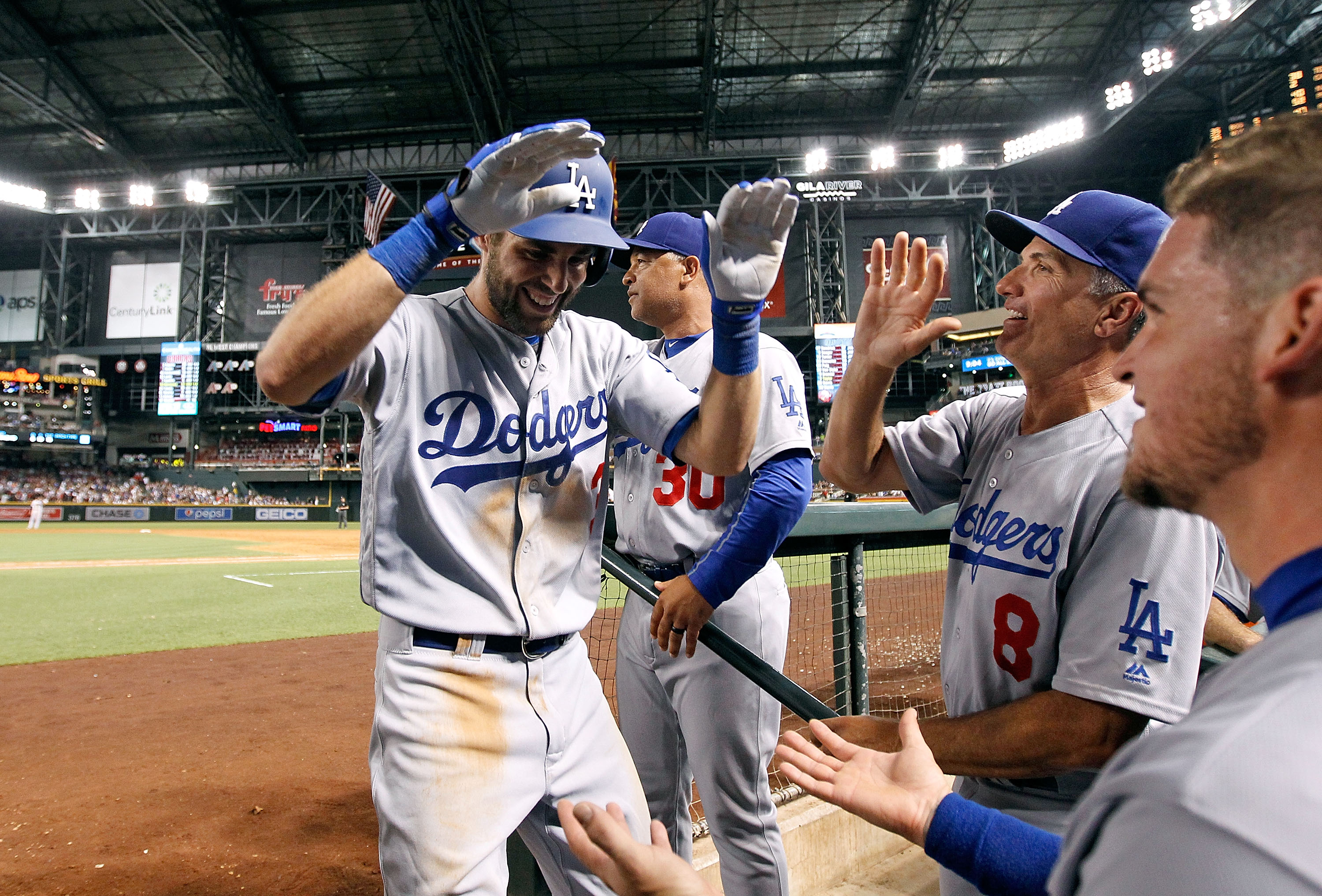 Chris Taylor had the game of his life (Photo: Ralph Fresco | Getty Images).

Double your pleasure: Corey Seager had five doubles in the weekend series against the Diamondbacks, and tied a Dodgers franchise record with three doubles on Sunday. Turner was the last to hit three doubles in a game, on April 19, 2015, one of 50 Dodgers three-double games dating back to 1913.

Johnny Frederick holds the Dodgers rookie record with 52 doubles in 1929, but the Los Angeles franchise rookie mark is 30 doubles, set by Eric Karros in 1992. Seager has 27 doubles, tied for the National League lead, through 94 team games, on pace for 47 on the season. Then again, Seager has always hit doubles.

There have only been 10 individual 40-double seasons by LA Dodgers, with Shawn Green atop the list at 49 doubles in 2003.

Grand entrance: Chris Taylor finished a single shy of the cycle on Friday in Arizona, and his grand slam in the sixth inning was his first career home run. Taylor is the fourth Dodger ever to hit a grand slam for his first career home run, and the first since the club moved to LA. The other three came with Brooklyn — Preston Ward (1948), Erv Palica (1950) and Chico Fernandez (1956).

Tuesday: Cole Figueroa cleared waivers and was sent outright to Triple-A Oklahoma City, but he declined the assignment and became a free agent. He later signed with the Marlins on Saturday.

Thursday: Will Venable was sent outright to Triple-A for the second time in 2016, and he accepted the assignment.

Saturday: Trayce Thompson was placed on the 15-day disabled list with lower back irritation, retroactive to Monday, and utility man Zach Walters was recalled from Triple-A Oklahoma City.

The Dodgers run the Mike Jorgensen gauntlet, continuing their road trip with three games against the Nationals in Washington D.C., followed by three games against the Cardinals in St. Louis. The Dodgers have only revealed their rotation through Wednesday, but with Clayton Kershaw not pitching in the Washington series that Thursday start seems destined to go to Bud Norris.