A lot of things went wrong for the Dodgers last week. They got bad news on Clayton Kershaw, who went from potentially returning to the rotation to shut down with more discomfort in his back, and the word surgery was used, even though it's not necessarily probable.

Alex Wood also suffered a setback and had arthroscopic surgery on his left elbow, knocking him out for eight weeks. Hyun-jin Ryu was shut down, too, after just one start, but not because of a shoulder issue. He was shut down with elbow discomfort, and placed on the disabled list with elbow tendonitis.

Corey Seager wasn't exempt, suffering from a stomach bug that wiped him out for all three games in Washington D.C., a malady that put Yasmani Grandal on the shelf for one game as well.

All that, and Yasiel Puig had to leave early on Thursday with tightness in his right hamstring, which limited him to one plate appearance over the weekend in St. Louis, and could land him on the DL if he doesn't improve by Tuesday in Los Angeles.

But despite all that, plus two more relievers hitting the disabled list, the Dodgers found their sanctuary on the field. They took two of three against the first-place Nationals, then did the same against the Cardinals, coming within one out of a sweep in St. Louis.

That 4-2 week on the road knocked yet another 2½ games off their division deficit, now just three games behind the Giants, the closest the Dodgers have been since June 10.

Dodger Batter of the Week: The hot streak for Justin Turner has gone on for so long, nearly two months now, that it is quickly becoming just another very productive season for the third baseman. Last week he clubbed three more home runs, hitting .393 (11-for-28) with three doubles and eight RBI.

He was joined by a suddenly formidable middle of the Dodgers lineup, with Howie Kendrick continuing his hitting streak and hitting .308/.379/.615, and Adrian Gonzalez driving in seven with home runs on both Saturday and Sunday, including a grand slam.

Dodger Pitcher of the Week: In just his fourth start back from the disabled list, Brandon McCarthy pitched into the seventh inning on Friday night in St. Louis, allowing only one hit and two runs, one earned, striking out four in his longest outing of the season. Honorable mention goes to reliever Luis Avilan, with five strikeouts in three scoreless innings. 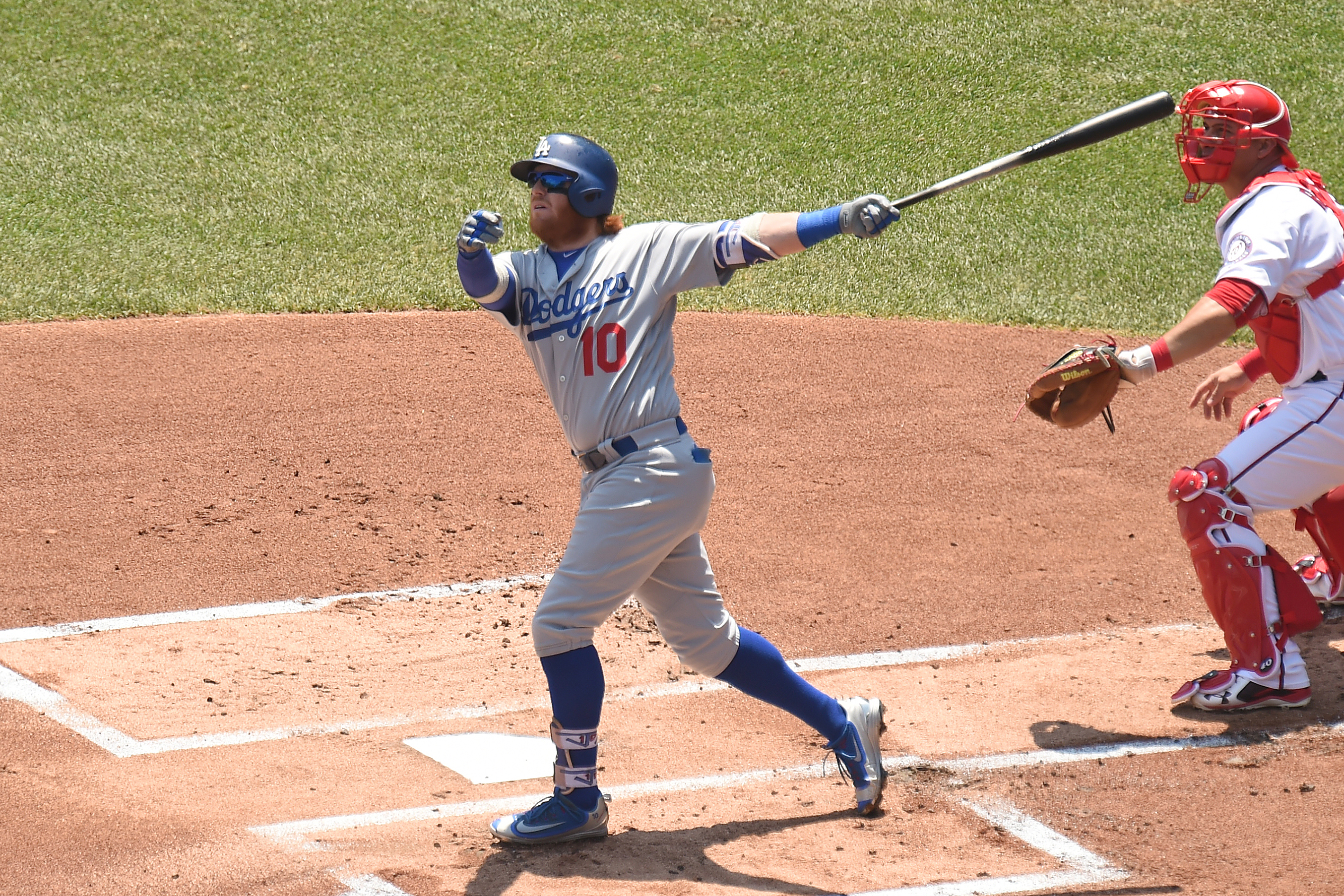 Extra, extra: Friday night's 16-inning game in St. Louis matched the longest game in the history of the Dodgers-Cardinals rivalry, the third time in 2,057 games between these two teams. The previous two 16-inning games were Aug. 21, 1963, won by a walk-off single from John Roseboro at Dodger Stadium, and May 2, 1957, a 3-2 loss to the Cardinals at Ebbets Field in Brooklyn.

Tuesday: Joc Pederson was activated from the disabled list and relief pitcher Luis Avilan was recalled from Triple-A Oklahoma City. Both Hyun-jin Ryu and Casey Fien were placed on the 15-day DL with elbow tendonitis.

Wednesday: Infielder a Charlie Culberson was recalled from Triple-A, and relief pitcher Chris Hatcher was placed on the disabled list with a strained left oblique.

Thursday: Julio Urias was recalled from Triple-A to make a spot start in the series finale in Washington, and purchased the contract of relief pitcher Grant Dayton, who pitched two scoreless innings in his major league debut on Friday. Culberson and utility man Zach Walters were optioned to Triple-A.

Friday: Austin Barnes was recalled from Triple-A, and Urias was optioned to Triple-A.

Saturday: After the 16-inning contest on Friday, Ross Stripling was called up from Triple-A as a fresh arm in the bullpen, and Dayton was optioned to Oklahoma City..

The Dodgers run the Travis Lee gauntlet, back home to face the Rays for two games, followed by three weekend games against the Diamondbacks, with two off days in between. With a week before the trade deadline, consider these pitching matchups a little less probable than normal.