LOS ANGELES -- In dealing three prospects to the Athletics in exchange for Rich Hill and Josh Reddick, the Dodgers pulled from an organizational strength to improve the team in the now while, limiting the risk and stress to the system.

While Grant Holmes and Frankie Montas have All-Star potential, and Jharel Cotton inches closer to a major league bullpen role, the Dodgers have seen enough gains from other pitchers in the minors to make this trade without overly depleting the reserve of arms. Thanks to the improvement of the depth of the system as a whole, the Dodgers were able to make some sacrifices in talent to improve the the current prospects of the big league team without doing significant damage to the future.

The biggest loss in acquiring Hill and Reddick was Holmes, who was ranked third in the system to start the year and in my mid-season rankings. Holmes did not move up to second with Corey Seager departing the rankings primarily because I had lowered his ceiling score from an admittedly lofty number in the pre-season. That being said, Holmes was making real strides in the California League and had taken steps to improve his outlook for staying in the rotation.

In working to become more pitch efficient, Holmes saw both his strikeout rate and walk rate drop this season despite jumping to a much tougher pitching environment. Holmes’ stuff looked to be pretty much intact from last season, with reports of low to mid-90s velocity and the feel for a plus breaking ball. With further progress on command and comfortably with more experienced hitters, Holmes appeared prime for a breakout at Double A in 2017.

It’s not the best physical/stuff comparison, but I see Holmes’ upside today as that of Matt Cain, who probably received more credit for his arm strength than his radar gun readings warranted, but also produced at an above average or better level across six straight 200-inning innings. Holmes will still need to improve his command to reach such workhorse status, but he’s just 20 and is trending in the right direction.

It’s hard to find several pitchers in one system with more or similar upside to Holmes, but the Dodgers might just make this claim. Julio Urias and Jose De Leon both topped Holmes in my mid-season rankings and should stake claims on pitching roles ahead of Holmes in the major leagues. The development of Yadier Alvarez and Imani Abdullah likely made this trade easier to stomach for the Dodgers, as both are on career tracks just a year behind Holmes at present, and could catch him in the next year or two.

"Our broader philosophy was this is a team that from a minor league standpoint has a lot of pitching depth, particularly starting pitching in the pipeline coming up through Double-A and Triple-A," general manager Farhan Zaidi on Monday. "The ability to meet our trade needs from a pitching depth rather than going to the position player side was our preference."

Frankie Montas might be the big name that’s easiest for fans to part with, as injury has kept him to just 16 minor league innings this year and far removed from the role many envisioned for him at the start of the season. Montas jumped to eighth from ninth in my mid-season rankings thanks to the graduation of Seager and no on-field or long term injury reason to lower his status.

If anything, Montas’ early-season injury issues would likely have closed the door a little further on his chances of eventually starting for the Dodgers, especially if they had designs of him contributing this season. In relief, Montas was likely passed for the rest of 2016 by both Urias and De Leon, assuming he is able to make it back to the mound before the minor league season ends.

Oakland might have more patience for Montas in the rotation, but my strong belief is that his future lies in the bullpen. Montas has lost a prime year this season to work on the development of a third pitch, and might be better going forward strictly focusing on his plus fastball and slider. Montas could have played a major role in 2017 pitching out of the back of the pen, and from a talent standpoint, could have served as insurance in case Kenley Jansen departs.

Given the layoff this season, however, that last statement was likely too long a bet for the Dodgers. The Dodgers don’t necessarily have a like for like replacement for Montas, but they also don’t have a present need in the bullpen either. With the acquisition of Josh Fields, the Dodgers have enough depth to cover an immediate need for a strikeout-heavy bullpen arm, and an off-season of free agency to fill any gaps. 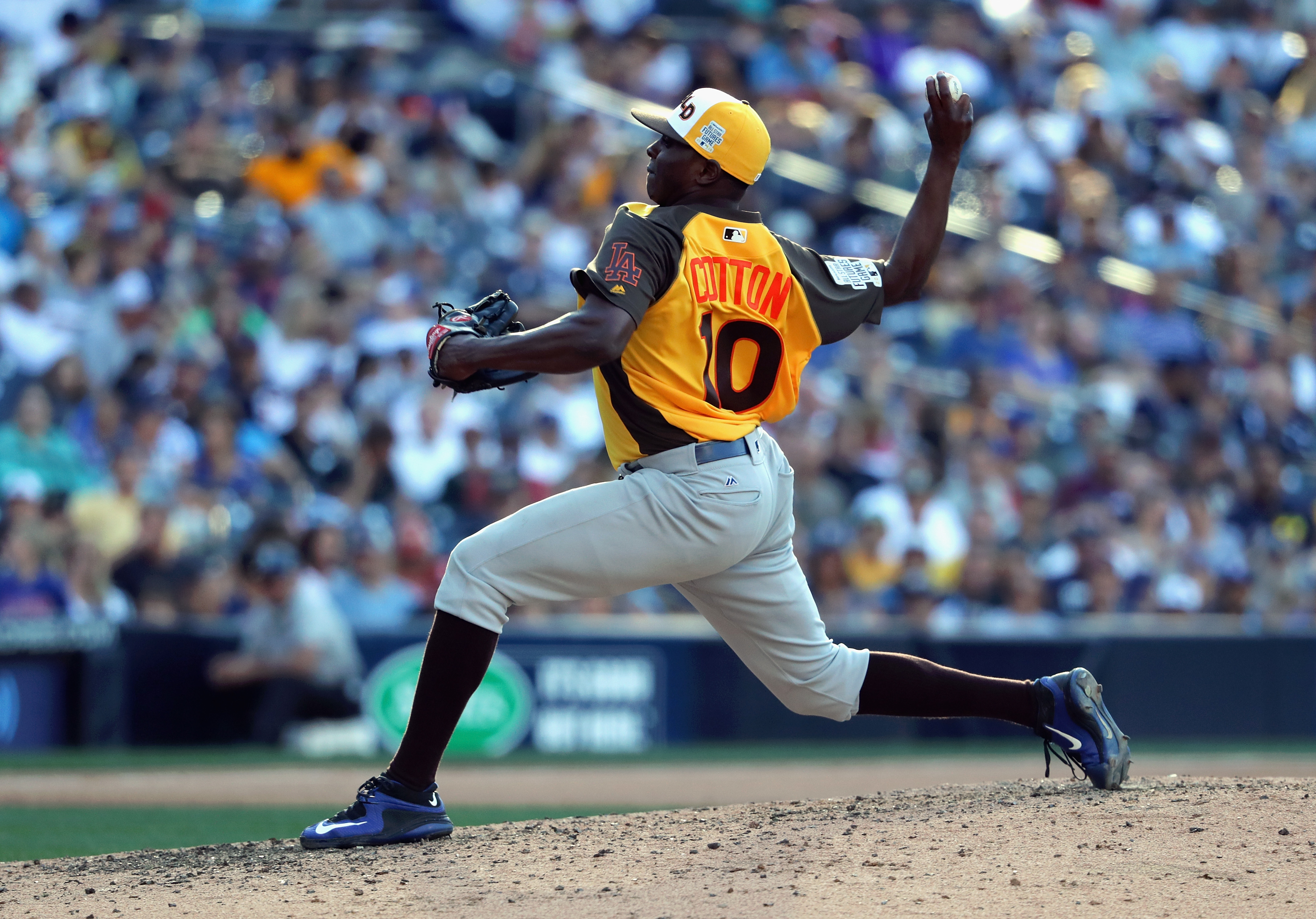 Jharel Cotton slid from 16th in the pre-season to 21st in my mid season rankings, partly because of incoming draftees and breakout performers in the system, but also partly because of his own uneven performance. While Cotton’s rates have held steady, he’s bounced between starting and relief and has surrendered an alarming number of home runs.

In my looks last season of Cotton, I believed his best role would eventually be in the middle of the pen. While Cotton can show three pitches and flash plus with two on occasion, he tipped them with his arm speed and mechanics, and could not command the fade of his change-up. In the bullpen, Cotton would benefit from less looks at the Bugs Bunny changeup, and could worry less about refining the command or shape of the pitch. Additionally, the bullpen might allow Cotton to pitch more consistently at the top of his velocity range, which was 95 mph last season.

Cotton was never quite as good a prospect as most injury rankings would have led you to believe, and he was the most vulnerable to becoming expendable with the improvement of other arms in the system. Brock Stewart and Trevor Oaks had passed him in the starting pitching pecking order, and Josh Sborz, Chase De Jong and even Andrew Sopko were closing in. Even in relief, Cotton was passed by Ross Stripling, and going forward, would likely have waited behind Urias and De Leon.

In a seller’s market, the Dodgers were bound to likely overpay in terms of potential value to improve the present. That might still end up being the case, especially if Holmes becomes a stalwart as the second or third starter in Oakland while Montas closes out his victories for years to come.

"In the era of two wild cards, there are a lot of teams out there that feel like they're still in the playoff hunt, and not as many teams in pure sell mode," Zaidi said. "Some teams can use that position to ask a little more for the players that are available.

"The perception out there with these deals coming in that the buyers paid a high price. But maybe it's not a high price, maybe it's just the price of doing business in a trade market like this."

Given the talent still in the system, the Dodgers likely saw this move as a mitigated risk and still have much to look forward to on the mound in the minor leagues.