Dodgers Week 18: Everybody chipping in

Share All sharing options for: Dodgers Week 18: Everybody chipping in

Last week was an eventful week for the Dodgers, who finally reached the end of their rope with Yasiel Puig, at least for now, sending him to the minors. The club added four players before Monday's trade deadline, with the headliner still unable to pitch with blisters on his left hand and outfielder Josh Reddick going 1-for-20.

The Dodgers lost one game by 10 runs, and another by nine, saw five of their eight regular position players hit .174 or below.

Two more relief pitchers were placed on the disabled list, as was starter Bud Norris, and Brandon McCarthy walked five in both of his starts, something he has never done in any start before.

Yet in spite of all that, the club managed to break even, including taking two of three from the Red Sox over the weekend.

Justin Turner continued to rack up extra-base hits, a healthy Yasmani Grandal kept hitting, and Adrian Gonzalez hit his 300th career home run. They were buoyed by the major league debut on Sunday of Rob Segedin, who set a franchise record with four RBI in a win over Boston.

The 27-year-old Segedin was joined by 28-year-old Grant Dayton, who on Saturday pitched in his second big league game, striking out four in two scoreless, hitless innings.

Ross Stripling came through in a pinch, and Kenley Jansen struck out eight of his nine batters faced.

The end result was a 3-3 week, and another game gained on San Francisco in the National League West. The Dodgers, once eight games back in the division, are now just one game back.

Dodger Batter of the Week: Adrian Gonzalez hit his 300th career home run on Sunday against one of his old teams, and hit .429 for the week.

Dodger Pitcher of the Week: Ross Stripling gets the call here, with his five scoreless innings in a spot start on Saturday to beat the Red Sox. 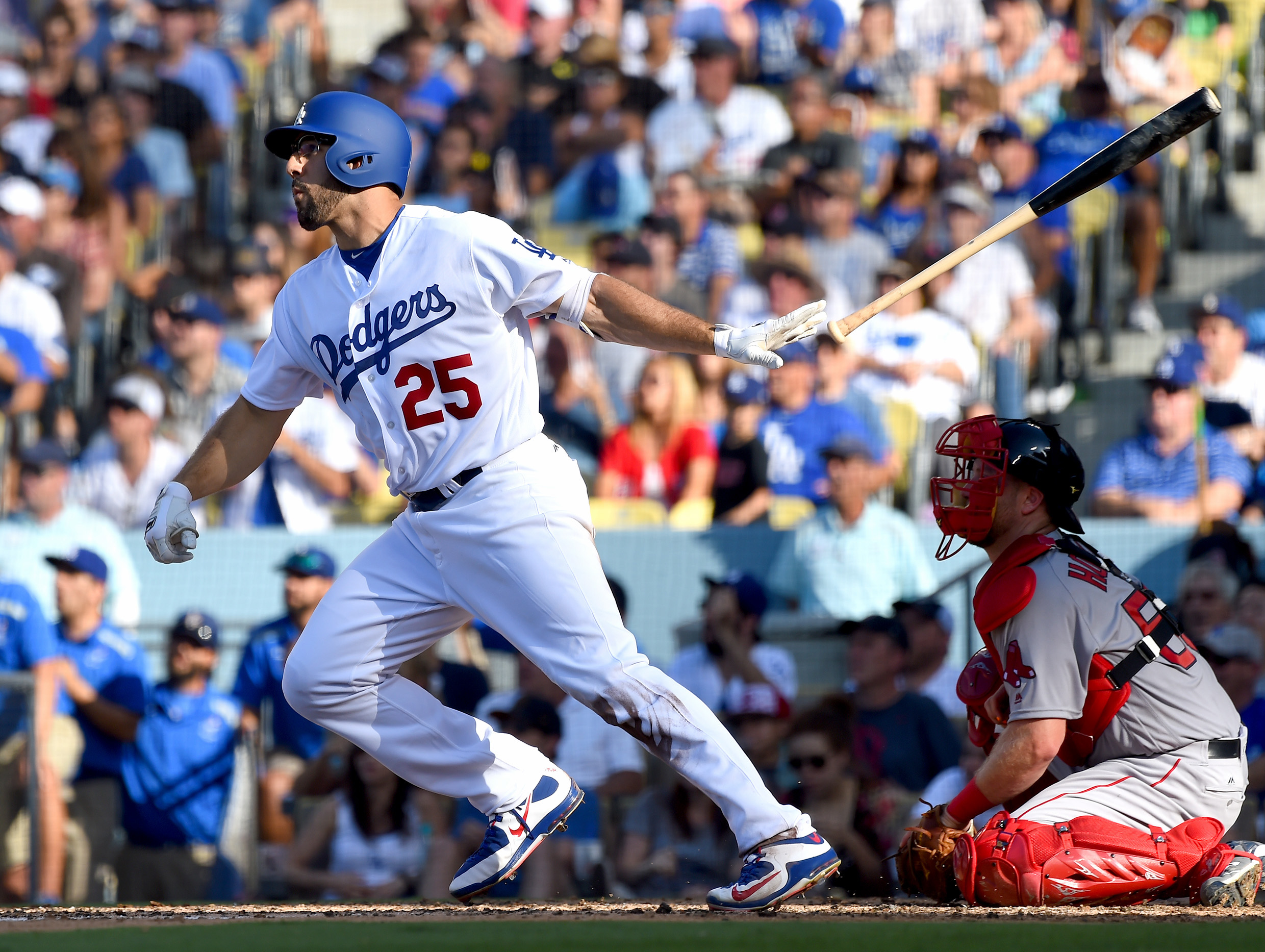 Monday: Swing man Jesse Chavez was acquired from the Blue Jays along with $1.15 million in exchange for pitcher Mike Bolsinger

Monday: Relief pitcher Josh Fields was acquired from the Astros in exchange for Cuban first base import Yordan Alvarez.

Wednesday: Brock Stewart was recalled from Triple-A to start in Denver, joined from the minors by pitchers Fields and Julio Urias. Adam Liberatore was placed on the disabled list with left elbow inflammation, and Louis Coleman went on the DL with right shoulder irritation. Andrew Toles was optioned to Triple-A, and Josh Ravin was reinstated from the 60-day DL after his 80-game PED suspension ended, and also optioned to Triple-A. To make room for Ravin on the 40-man roster, Clayton Kershaw was transferred to the 60-day DL.

Thursday: Stewart was optioned back to Triple-A, with relief pitcher Grant Dayton recalled from Oklahoma City.

Saturday: Bud Norris was placed on the 15-day disabled list with a mild mid-back strain, and Stripling came back up from Triple-A to make Saturday's start.

Sunday: 27-year-old Rob Segedin was called up to make his long-awaited major league debut, with infielder Chris Taylor optioned back to Triple-A Oklahoma City. To make room on the 40-man roster for Segedin, outfielder Trayce Thompson was transferred to the 60-day disabled list.

The Dodgers run the Dave Cash gauntlet, hoping a run through the Quaker state teams at home can oil up their journey to the top of the division.