By Michael Elizondo@elidelajandro Feb 15, 2022, 9:01am PST
Or one of the Lost SaveEli Post-Mortems, restored with full audio and visual like it was just released. The Traveling Correspondent’s stories regarding Mookie Betts in 2021.
/ new
Vista shot of Mookie Betts up to bat to start the game in Pittsburgh, June 10, 2021.
| Michael Elizondo

Share All sharing options for: The complete Mookie Betts: A 2021 #SaveEli Post-Mortem

As #JuniorCircuit has a signature GIF, whenever I return to the past of #SaveEli, I shall draw upon the meme I’ve adopted for my own. I feel that it’s important to lean into your eccentricities. Plus, the GIF really does sum up that first trip.

“A Lost Track of the SaveEli Collection”

It’s not exactly a state secret that Mookie Betts was generally unsatisfied with his performance in 2021. However, on closer examination, that view doesn’t make a whole lot of sense.

In fact, Mookie had one heck of a year in 2021...and he hit a lot of doubles when I was in attendance.

In fact, Eric wrote Mookie’s view about he performed in 2021:

A frustrating and injury-plagued season by Mookie Betts proved to be still quite valuable and productive, even if not up to his own standards, but also reminded us in glimpses of his full, unrestrained talent.

I have to admit that I didn’t see what the big deal was when the Dodgers first acquired Betts. Admittedly, Mookie played in the American League, which means, for my purposes, he might as well played on the moon.

Seriously - did you think I wasn’t going to dip into the highlights of the COVID Cup? The man actually made me lose my voice when I was picking up dinner during World Series, Game 6:

The question for Betts in 2021 was whether he could duplicate his heroics in 2021, which is a deeply unfair question considering a 162-game season is entirely different from a 60-game season. When I did a deep dive into what Mookie Betts did when I was around in 2021, I was genuinely surprised at what I found. 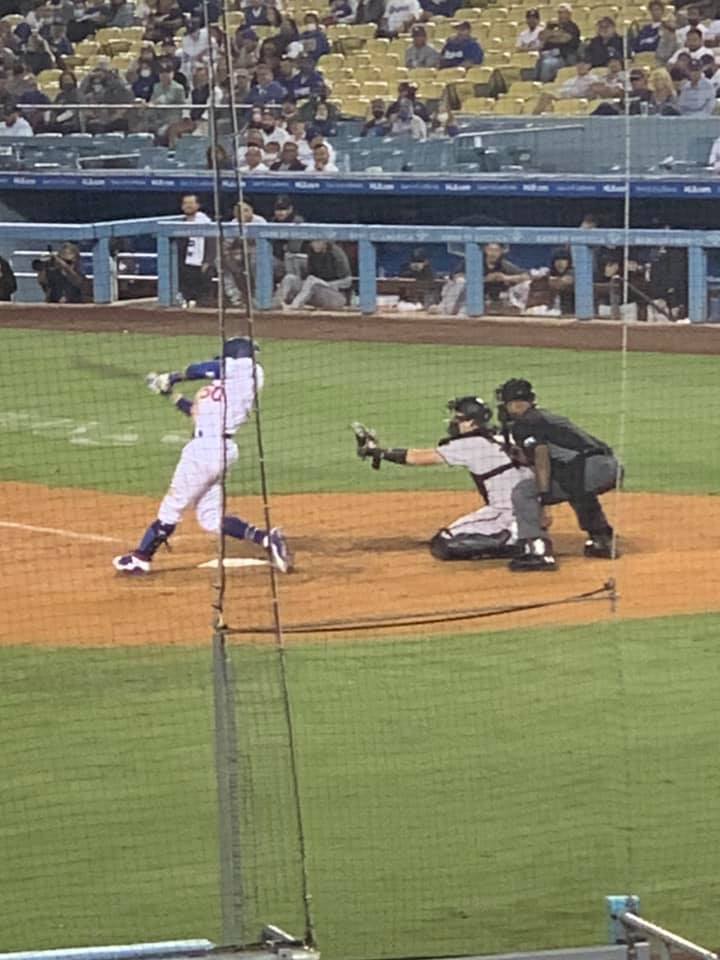 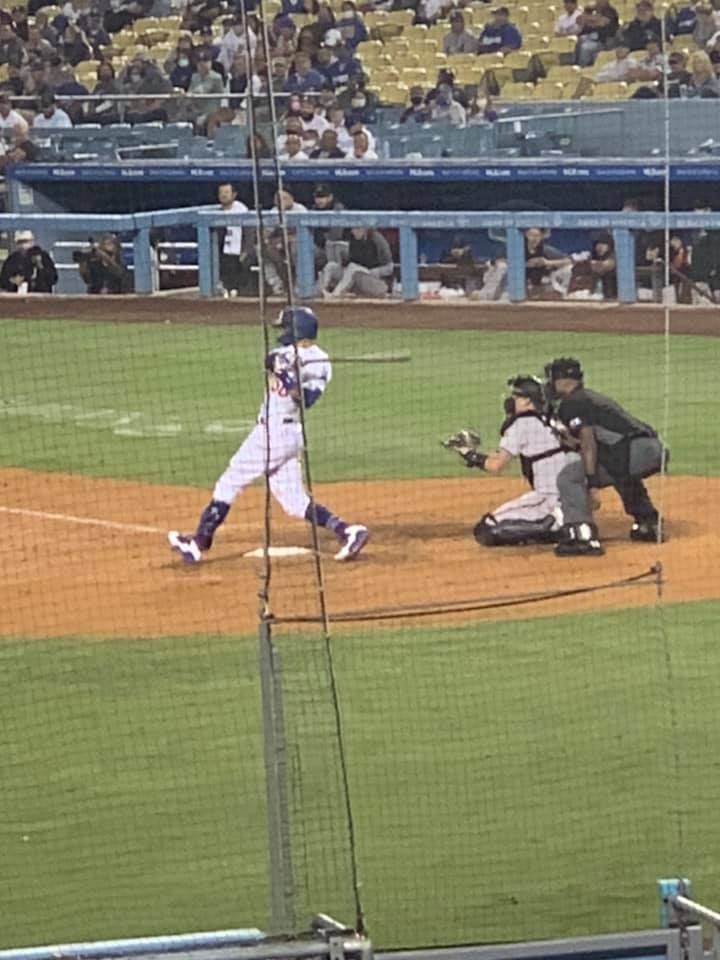 Mookie Betts appeared in 27 of the 30 regular season #SaveEli games. Oddly enough, the only place that he missed games when I was around was “at home” in San Francisco on three separate occasions. Baseball, everybody!

Mookie also played in NLDS Game 2 where he went 1 for 4, with an RBI, BB, and a SB. He also caught the final out.

Truthfully, I wish I had taken more videos of Mookie Betts generally being awesome in 2021. However, on review, a lot of the footage was Betts drawing walks. It’s not terrible, but it’s arguably not all that interesting.

If these 2021 stats were the RC to his Coca-Cola, it begs the question of what his Coca-Cola looks like. That’s All-Star material right there. Is Mookie Betts supposed to be in the MVP mix every year - because if so, there’s really nowhere else for him to go, which is really a nice problem to have.

A lot is said about Mookie’s defense and the majority of these Post-Mortems don’t focus on defense apart from the eye-test as I generally don’t understand the defensive statistics and generally, the defense only tends to stand out when it’s really good (Cody Bellinger says hello) or really subpar (Corey Seager waves hello.)

Let’s face it, he’s a handsome man, but unless something instantly happens, then I’m just watching him stand in right.

I normally don’t poster other people’s media in postmortems, but sometimes it helps when I’m too busy watching the game to actually remember I was an amateur correspondent. The play that immediately jumps to mind is one I was fortunate enough to witness on June 10, 2021.

Honestly, do not care for the call, but I work with what I have.

Mookie’s most productive offensive day when I was around was on July 17, in Colorado. He went 4 for 4, with 3 runs scored, 3 doubles (should get his hands on some of that In-N-Out money - the opportunity is right there), a HR and RBI...and he injured his hip and missed the two games in San Francisco in July.

Speaking of that game, Eric wrote about it too saying:

Things came to a head almost immediately after the break, forced out after hitting his fourth extra-base hit in a game in Denver.

To be fair, I thought he pulled a hammy at the time. It was all fun and games until that happened...well that and the boo-off with a child. I originally went to that game with friends who moved out of the Bay Area who are Rockies fans and the daughter was moved by her mother’s reactions to the game – namely the Rockies sucking, which they amply did that day. So their daughter booed me (because of the Dodgers jersey). Not to be outdone, I booed back. She took offense to that (the child, not the mom – the mom knows what I’m about) and the cycle of booing began.

Naturally, everyone around me thought it was hysterical and she’s a cute kid. We all ended up on Jumbotron twice, because the daughter is cute as a button and she had a small army of stuffed animals.

She also tried to steal Adric, which was funny and traumatizing in itself.

Or “A Water Bottle In Pittsburgh”

In fact, that June 10th game, apart from being memorable for that throw and the rain and my main man Tony Gonsolin generally being an awesome human being, is that game was as close as I got to Mookie Betts’ now-wife.

For perspective’s sake, here is where I was sitting.

Now she wasn’t seated at the end of the row when I took this photo. I have a general rule about players in non-game settings and their family members: do not bother them. Now, if I’m in a confined space, say an alcove at AT&T/Oracle Park waiting to get to my seat and we’re just standing there, my natural inclination for making small talk will kick in and conversation will ensue.

Eric will attest - I can (and frequently do) talk people’s ears off.

Hence, why I interacted with Champ and Papa Pederson and why I left the Vesia family alone when I ran into them in Anaheim and again in San Francisco.

What the above photo doesn’t show is how muggy the day ultimately was. It wasn’t the muggiest game I went to all year (as that would be the finale in Cincinnati), but it was uncomfortably warm. Considering that I have the physique and health of an offensive lineman, I am more deeply affected by the heat. The trade-off is that the cold doesn’t really bother me anyway…unless it’s snowing, but that’s probably not going to be an issue in my travels.

/Michael looks nervously at the 2022 schedule in Minneapolis in April. Eh, it’s probably fine. #FamousLastWords. Or the owners might make the concerns moot.

At one point during the game, I don’t remember if it was before or after the throw, Mookie and his-now wife made eye contact and I think she remarked that she was thirsty. Mookie got this gleam in his eye and had handed some bottled water to a fan with instructions to pass to his finance. So the water got passed. I don’t think I saw Mookie with a larger smile on his face as he had when he was interacting with his now-wife during the game.

I don’t recall when she finally left, but I am fairly sure she left before the heavens opened up.

But to be fair, everyone apart from some little leaguers and me left early, so she was in good company. As for me, I was not to be moved as warm rain is barely an inconvenience.

We age when we forget how to play. That said, I got soaked that day, but I don’t think I’ll ever forget witnessing that interaction with the Betts family and the events that followed.

As for the future adventures of Mookie Betts, we’ll see once baseball returns.

When did this event happen? Nope, that’s a 2022 discussion!

A modest proposal for the Dodgers to acquire Tanner Houck

Jeff Kent drops off the Hall of Fame ballot