Or “They Should Call Him Mr. Five” or “The Heir to Valenzuela”

By Michael Elizondo@elidelajandro Mar 25, 2022, 8:03am PDT
The collected stories of TrueBlueLA’s Traveling Correspondent concerning the hero of the COVID Cup and rotation mainstay, Julio Urías, in 2021.
/ new

Share All sharing options for: The complete Julio Urías: A 2021 #SaveEli postmortem

As #JuniorCircuit has a signature GIF, whenever I return to the past of #SaveEli, I shall draw upon the meme I’ve adopted for my own. I feel that it’s important to lean into your eccentricities. Plus, the GIF really does sum up that first trip.

Kenley Jansen - Confessions of a Booer

Clayton Kershaw - One More Time for the Last Time

They Should Call Him Mr. Five

I remember Julio César Urías. In some ways, I should remember him better than most.

In many ways, it seemed like Julio Urías had two different seasons in 2021. He was generally fun to watch and unlike his now-former compatriot Max Scherzer, Julio Urías could actually hit.

Or if the above photograph doesn’t do that moment justice...

I saw Julio Urías five times during the regular season in 2021. Julio Urías was also the starter of NLDS Game 2, where the Dodgers slapped around the Giants. Urías even started the scoring. I had fun, everyone else likely did not, but this series isn’t “everyone else’s recollections of the 2021 season,” it’s mine. If you, dear reader, wish to go to 30 regular-season games in 13 different cities in 2022 (or beyond) - more power to you.

Why is Julio Urías Mr. Five, you ask. Apart from my wanting a sandwich?

The most direct answer is that I saw Urías five times, which is exactly half as many times as Mr. Saturday Night, Walker Buehler. Well, the number five pops up a lot when discussing Urías’ adventures around me. He went five innings in three starts (technically four, if you want to include the 5 2/3 innings he went in San Francisco with my family in tow) and in the NLDS.

Urías also struck out exactly five batters in two of his five starts and in the NLDS.

Julio Urías’ ERA when I was around is near five, which is inflated due to a nightmarish start in Anaheim on the original SaveEli trip, where I totally threw Sheldon Neuse under the bus to get the drunken Angel yokels to leave me alone. 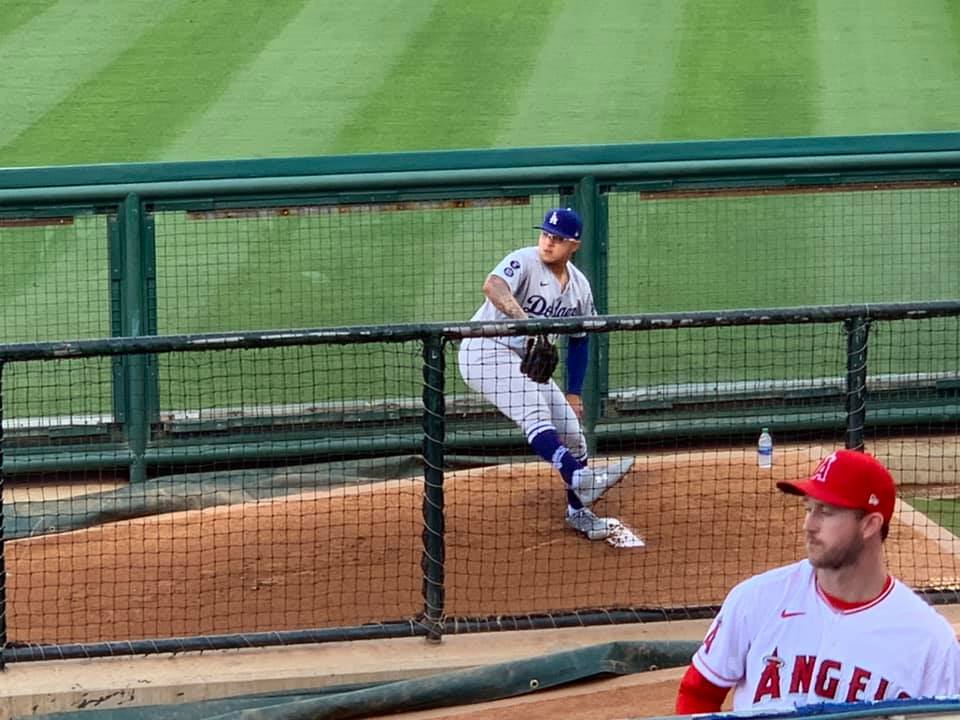 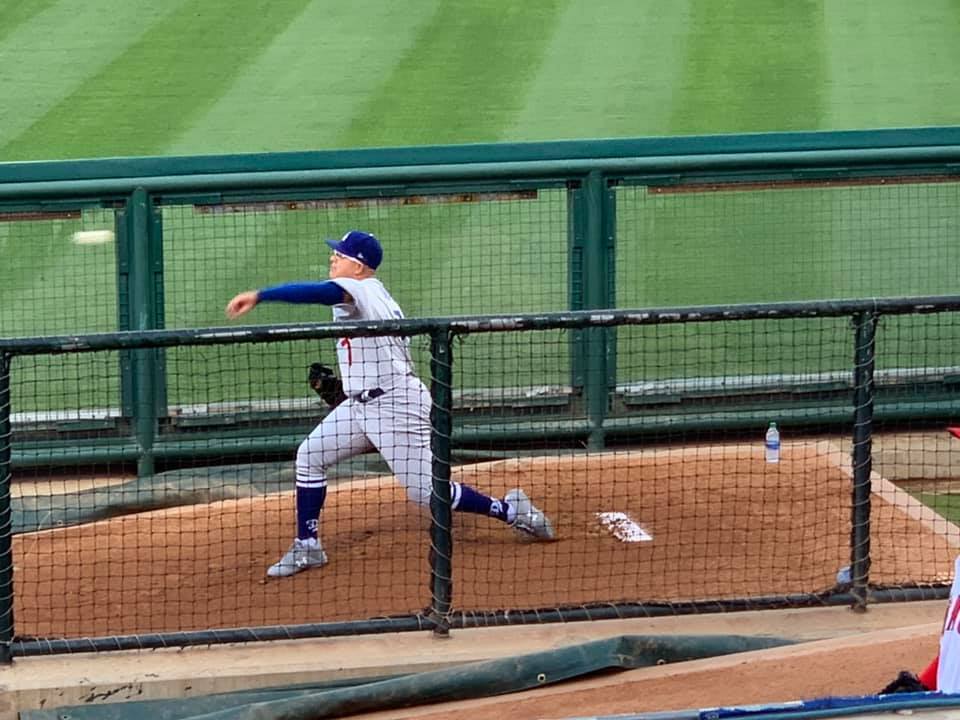 Per Baseball-Reference, Urías’ bWAR is almost five at 4.7. 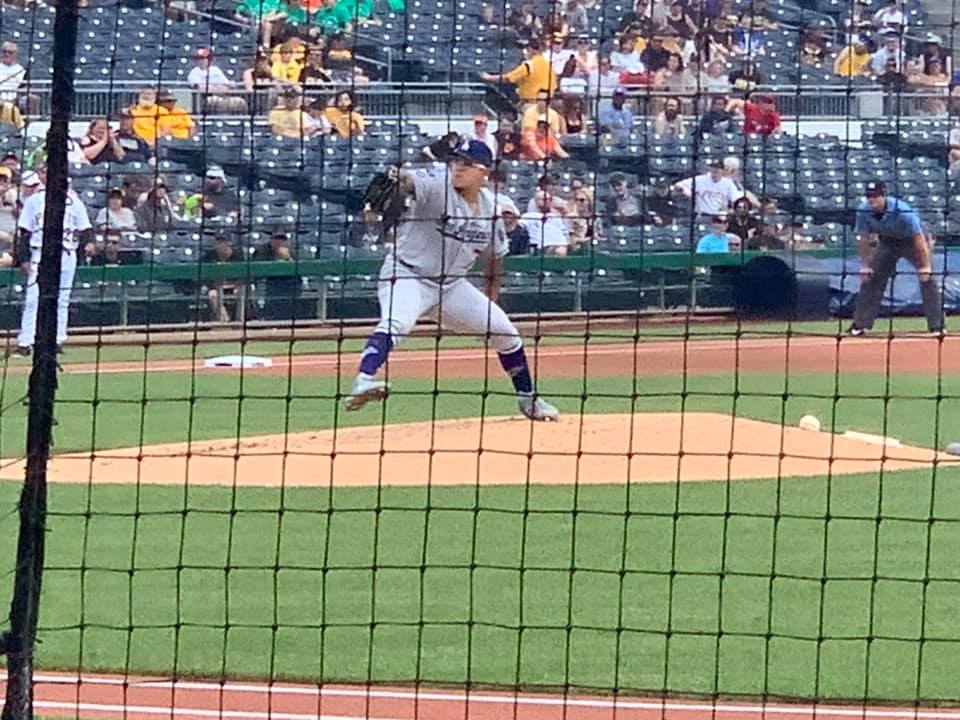 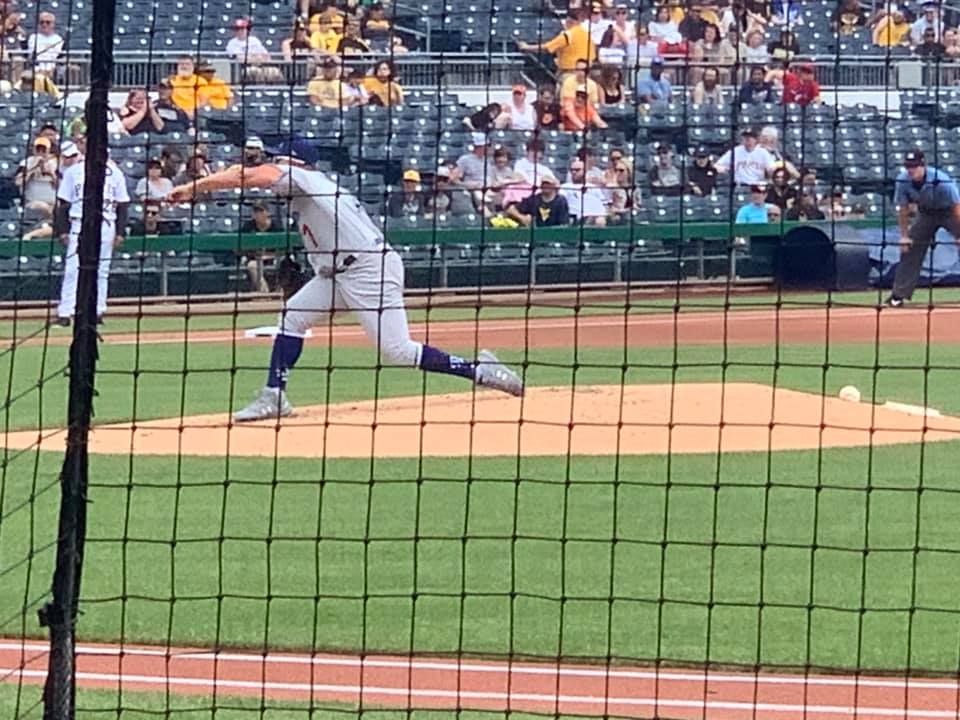 One minor statistical quirk that arises in Urias’ statline is the sheer lack of free passes, especially when compared to Walker Buehler. Urias’ walks all occurred in Los Angeles - two in April vs. the Reds and two in September vs. the Diamondbacks. Baseball! Even in Urias’ nightmare start in early May in Anaheim, he didn’t walk anybody.

The Heir to Valenzuela

In order to best tell this part of the Post-Mortem, once again, we must use the Wayback Machine...

I am in a minor lull in between my four consecutive law school finals and graduation. I remember feeling restless, so I figured I could blow off some steam by going to a Dodger game in San Francisco.

The problem was that it was infinitely cheaper to buy two tickets than just buy one.

So I got it into my head to try and see if I could rustle up a date. Strangely enough, it worked. But San Francisco being San Francisco decided to not cooperate in being cool and cloudy like expected but a crisp warm spring day. Somehow my date’s legs were horribly sunburned even though she was wearing dark pants - go figure.

Anyway, I saw Julio Urías start that day and it was the only Urías start I saw in person prior to his season-ending shoulder surgery. From what I recall, he was young, a little wild, but otherwise effective, going 5 2⁄3 innings, giving up 4 H, 1 R (which was earned), striking out, and walking 4.

This game was deadlocked at 1 until the 10th when, well, let’s let the official video tell the tale:

Oh, Andrew Toles - what could have been and yet we merely hope you find a measure of peace now. Whether that’s in or out of baseball, we long to celebrate just a moment of your good fortune in a weary world.

A few ineffective starts later, Urías was done for the year and took the long way back to the majors, with great aplomb.

Give me Charley Steiner’s or Jaime Jarrín’s call of this moment any way of the week.

I was too young for Fernandomania by definition. As it occurred in 1981 and I was born in 1983. However, one of the things that stands out to me as to Urías’ 2021 is the apparent fact that the thing that stands out most about Urías in 2021 is the fact that the fanbase has glommed onto him in ways that remind of Fernando Valenzuela but which are entirely distinct from Valenzuela.

The COVID Cup heroics played a big part, but it’s been my informal observation that a good chunk of the Latino fanbase of the Dodgers wants a hero of their own to hold onto. Don’t get me wrong, they love Kershaw and Bellinger and Betts, but representation matters. And it’s not quite the same when the person you’re cheering for doesn’t look like you.

In some ways, it was extremely appropriate that Julio Urías took the bump on Fernandomania bobblehead night. 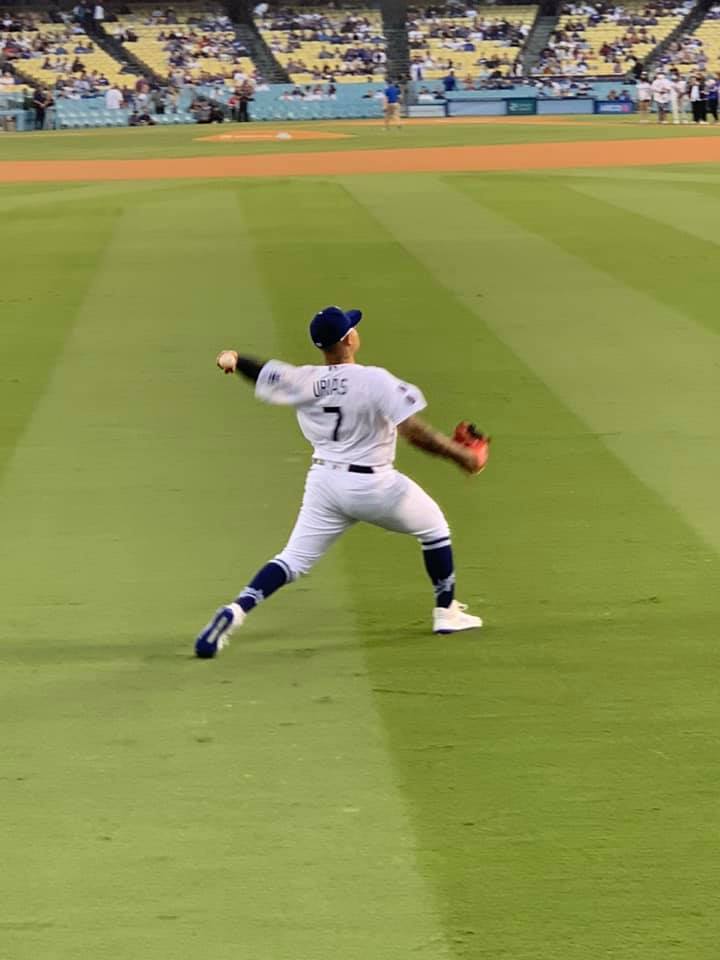 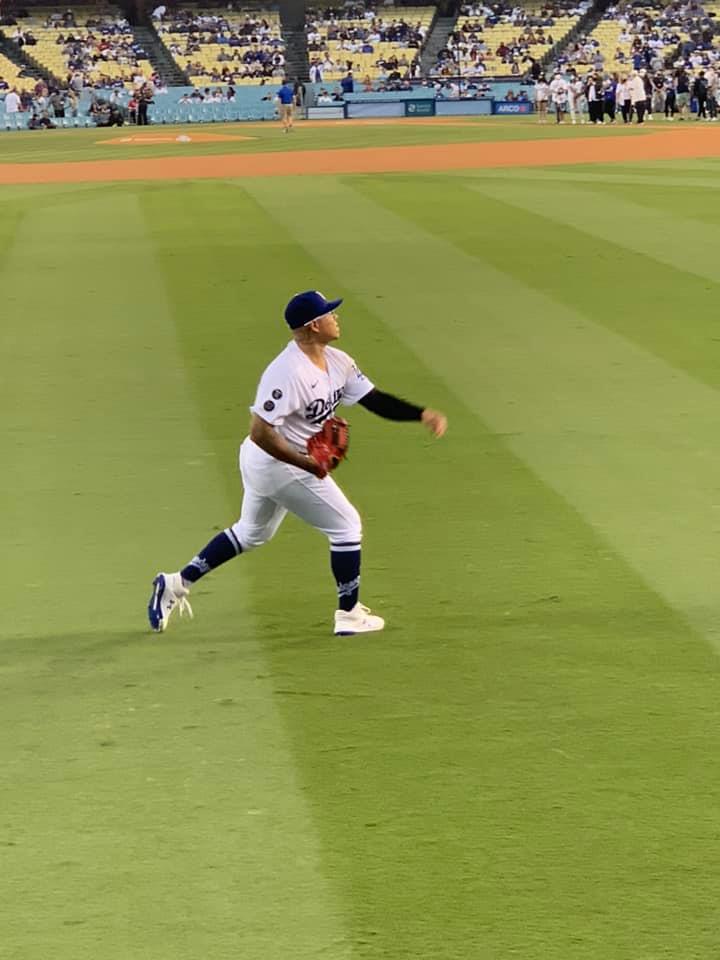 With Michelada in hand, I sat with my friend, Denise, in the Home Run section of Left Field.

I watched everyone go nuts and I watched Edward James Olmos go on and on about Fernando Valenzuela as a balm to the city of Los Angeles and the Hispanic/Latino population during the early 1980s. Again, while cynicism would be easy, I fully acknowledge that I was literally too young to be present for the events as described.

To conclude the ceremony, Fernando’s granddaughter threw out the first pitch, with Fernando catching. I thought it was a neat moment.

Urías was also effective that night going 5 innings, giving up 3 hits and 2 runs (both earned). Urías also walked two and struck out five in the Dodgers’ victory.

The crowd generally was going nuts for most of the game, as to whether it was due to Urías, or Fernandomania bobblehead night, or a combination thereof, I cannot say. What I can say is that Denise, Adric, and I had a grand time.

But something else happened during this game that is worth discussing in the Urías’ Postmortem: protestors ran onto the field with banners with the names of the Latino communities that were displaced with the construction of Dodger Stadium. Unlike a national television broadcast that could inspire copycats, I share my thoughts in a corner of the internet. It would seem to do this recollection a disservice if I just ignore what happened.

Rather than get off-topic, the historical events from over sixty years ago merit further analysis and study and their own essay. In some respects, I am the wrong person to write that essay. But as pointed out elsewhere, my screen name tends to straddle two different worlds (you only need the first minute of this video from where it is cued - the new clips feature of YouTube is not playing nice with the Vox article editor, as per usual):

For the record, I was trying to have a screen name of EliDealajandro, but I misspelled it and it came out EliDelajandro, as I was trying to think of something for poems as well as an email address. Then it stuck because it was easier to type and remember.

But I was there that night at Dodger Stadium, and while I joke that I am the most white brown person I know, in some respects, since I was there, I feel that I should explore this topic more in-depth. As a community, it’s worth asking what’s causing the agita, while condemning, in the strongest possible terms, going out to the field of play, while the game is on during an active pandemic.

You go onto the field during the game: you should go to jail and you should likely be banned from any future game. I am not sure of the value that my perspective will bring on the topic, but it will come from a place of honesty and there is always value in being honest and trying to do things the best you can.

As of this Postmortem, as a final note, as a demonstration of how much the City has embraced young Urías, I can attest that it’s virtually impossible to find a Julio Urías 2021 bobblehead for less than $60 on eBay. Good luck finding his rookie bobblehead. Not for nothing, but those facts are just a sign of how much the fanbase is rooting and cherishing Urías this year and hopefully in the years to come.

When you defer on the choice of who to virtually sit in the Augmented Reality Dodgers Dugout and someone picks Julio Urías to sit with - you just roll with it. But further discussion of the Dodgers Augmented Reality Dugout is a topic for the Los Angeles portion of the Guide.